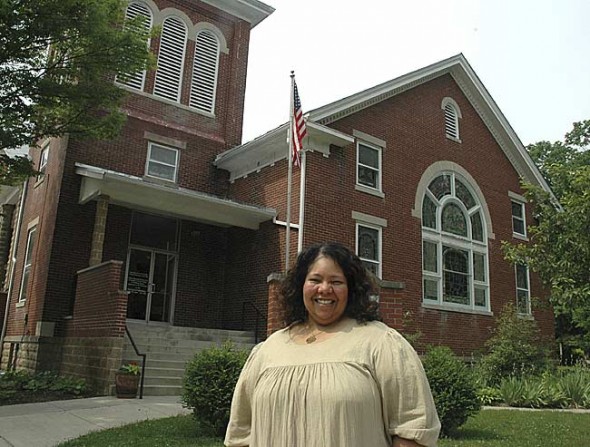 Yellow Springs native Sherri Blackwell, the new pastor at the United Methodist Church, gives her first sermon on Sunday, June 6, at 10:30 a.m. Blackwell plans to lead the church with a focus on “faith in action.” (Photo by Megan Bachman)

A new leader for Methodists

In the last eight years the Yellow Springs United Methodist Church has transformed from a small, aging congregation to an active and renewed church under the leadership of Pastor Charles Hill. As the 76-year-old Hill retires, the church looks to a new pastor, Yellow Springs native Sherri Blackwell, to build on his accomplishments.

“The activity of the church increased and my energy has decreased,” Hill said. “The person following me will be an absolute wonderful fit — she will be able to do things I won’t.”

Blackwell will give her first sermon at the church, the oldest in Yellow Springs, on Sunday, June 6, at 10:30 a.m. While she says she has much to learn about the congregation, she knows the Yellow Springs community well.

Blackwell, the former Sherri Upchurch, grew up in the 1960s in Yellow Springs, where she attended the First Baptist Church. A graduate of Oberlin College, Blackwell returned to town in the mid-80s, working jobs at Carol’s Kitchen and Anthropology Research Project, now Anthrotech.

After receiving a masters in management from Antioch University McGregor, Blackwell answered a call to ministry and enrolled at the United Theological Seminar in Dayton. She comes to her new assignment from Faith United Methodist Church in Springfield.

“In Yellow Springs there is a high sense of looking out for each other and being our brother’s and our sister’s keeper,” Blackwell said on returning to her hometown. With a focus on “faith in action,” she hopes to expand the church’s community involvement.

“Worship is important in order to be recharged and grow in your faith so you can go out and influence the world, live your faith,” Blackwell said. “The Yellow Springs congregation seems to already be doing that.”

In addition to running a food pantry for the last five years, the Yellow Springs church recently opened office space in its newly renovated building for the local non-profit Home, Inc., and last winter the church accommodated a winter farmers market in its basement.

“We’re a very active church with a lot of projects,” said church member Macy Reynolds. “We’re always saying, ‘what does our community need?’”

Blackwell will serve part-time in her new ministry while continuing her role as the executive director of the Springfield Open Hands Free Store, which she helped found. A group of local churches runs the store, which provides food, clothing and household appliances to those in need.

Blackwell is excited to work with such a passionate and powerful congregation in Yellow Springs, which as a small group was able to accomplish so much, she said.

“To see where [the church] is today is a source of inspiration and energy,” said Blackwell, who remembers being concerned about the future of the church as a youth.

“I’m really proud of this congregation that has done far more than I dreamed possible in the sense of recreating this building,” he said.

The church raised $500,000 from its members to remodel the church and the parsonage, or pastor’s house, located next door. Now fully handicapped accessible, the church upgraded its building, originally built in 1850, with a new air conditioning system, sound system and kitchen.

“To the community [the congregation] is saying, we’re not going anywhere,” Blackwell said of the renovations. She was especially impressed with the renovated parsonage, where she will be living.

“That they want it to look good for the pastor coming in — that’s a statement,” she said.

The renewal of the Yellow Springs church began when Pastor Hill came out of retirement. He had previously been a district superintendent, overseeing 97 United Methodist churches and 76 pastors in southwest Ohio.

Now retiring from his last long-term position, the Springfield resident views his experience in Yellow Springs as the “icing on the cake” of his 52-year career as a pastor.

“It’s been one of the most rewarding appointments I’ve had because I’ve had time to relate to people,” Hill said. He added that the next pastor also has good relational skills, and since she’ll be living in town in the parsonage, will have more time to counsel members.

Hill summarized his tenure in Yellow Springs by saying, “What’s really important is that [the congregation] united, got itself together, did a lot of work and are ready to welcome a young pastor with more energy.”

Blackwell said that while it’s intimidating to follow her former district superintendent, she looks forward to sharing in the next stage of the church’s journey, which she will discuss in Sunday’s sermon on new beginnings. It’s also the next stage of her personal journey, as she is entering her supervised years as a minister, with hopes of being fully ordained in two years.

“Pastor Hill paved the way,” Blackwell said. “The question is, where do we take it from here?”

In addition to continuing the church’s focus on social action, Blackwell plans to engage the congregation in theological discussions on God and faith, look for opportunities to partner with other churches in the area, and, most importantly, connect with members of the congregation to see where their passions lie.

“[Blackwell] will make us aware of how we can engage the community and grow the congregation,” said Reynolds. “We have a lot of energy and she’s going to enhance it.”