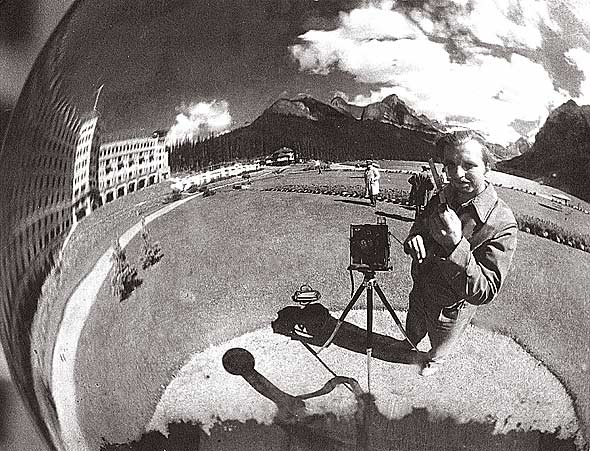 An open house to honor a newly published book of photographs by Axel Bahnsen, a world renowned photographer who lived and worked in Yellow Springs for 50 years, will take place this Sunday, Sept. 19, at 2 p.m. at the Senior Center. The book was designed by Jane Baker and edited by Paul Cooper. Shown above is a self-portrait of Bahnsen. (photo by Alex Bahnsen)

Bahnsen’s photos to be honored

For more than 50 years until his death, a photographer of international stature lived and worked in Yellow Springs. The work of that photographer, Axel Bahnsen, will be honored this weekend with the publication of a new book of his photographs.

“For me it was an amazingly exciting project, to discover how wonderful his work is,” said Jane Baker, who designed the book. “This is more evidence of the rich artistic heritage we share in this village.”

A book of 108 of Bahnsen studio photos, Photographs by Axel Bahnsen, was recently published, with notes by Paul Cooper, who initiated the book project. The book will be feted by the Yellow Springs Historical Society this Sunday, Sept. 19, at 2 p.m. at the Senior Center. Refreshments will be served.

While Bahnsen, who lived in Yellow Springs from 1924 until his death in 1978, was recognized with hundreds of prizes for his art photography during his lifetime, his work remained largely unpublished and unknown to a wider audience, Cooper wrote in the book’s introduction.

“Axel Bahnsen ranked high among those who spent much of their lives in photo darkrooms striving for the best possible results, which were then subjected to the criticism of judges in salons around the world,” Cooper wrote. “He won many awards for his efforts.”

Indeed, Bahnsen was the youngest person ever to be asked to join the British Royal Photographic Society and a longtime leading member of the Photographic Society of America, which ranked him among the world’s top 50 photographers by the time he was 30, according to Cooper. He traveled widely, and was co-speaker with renowned photographer Dorothea Lange at a PSA symposium in Aspen, Colorado. While the photos in the book include those from all over the world, “most of his daily work….drew upon settings and people available near his south central Ohio community,” Cooper wrote.

In his later years, Bahnsen became known as a portrait photographer, and he drew clients to his Yellow Springs home from long distances.

“He was a master of posing and studio lighting,” Dayton photographer Allen Horvath wrote in 1980. “Often he would seat himself next to his camera and engage a subject in lively conversation. Axel would carefully study the reactions of the subject and catch these character-revealing gestures and expressions in the finished portrait. He had an exceptional talent for capturing subtle nuances of personality.”

Bahnsen was also a passionate teacher, and his weekly “Sunday Salon,” held at his Glen Street studio, was popular with photographers and photography buffs from all over the region. Joining him in teaching was his wife, Eleanor “Bobbie” Bahnsen, an accomplished photographer in her own right. Horvath, who took part in the salons, remembered that Bahnsen would “lead a caravan of cars down a dusty road, or a troop of hikers into Glen Helen or nearby Clifton Gorge. Years of familiarity had taught Axel the limitless potential of the Glen…Many international salons viewed the compositions we discovered on these outings.”

Bahnsen first came to Yellow Springs as an Antioch College student in 1924, and according to the Horvath article, his photography career began with the purchase of a $5 vest-pocket Kodak, with which he recorded campus life as a way to communicate with his parents in Europe, because he didn’t like to write letters. However, his photos became so popular with other students that he had to charge 25 cents each to defray costs and two years after he picked up his first camera, he dropped out of college to become a professional photographer.

Over the years, Bahnsen took thousands of photos, and the book makes clear his photographic evolution, from a stylized art photographer of the ’40s and ’50s to a master of the naturalistic style of Edward Weston or Ansel Adams in later years. After his death, “people tried to figure out what to do with this enormous body of work,” Cooper said. While Bobbie Bahnsen kept the Glen Street Studio going for many years, there was no attempt to collect Bahnsen’s photos into a book.

Decades passed, but the challenge was taken up by Cooper, who works at the Yellow Springs Library, after he looked up one day at work to see Bahnsen’s daughter, Elaine Brown, at his desk. When he remarked that it was too bad that her father’s work had never been collected, Brown replied that she had always wanted to do so, but the project was overwhelming. With the help of the Yellow Springs Historical Society and the Community Foundation, Cooper decided to take it on.

The job of choosing photos for the book was daunting, Cooper and Baker said: Antiochiana has thousands of Bahnsen photos, and the Dayton Art Institute also has a special collection. Finally, they decided to restrict the book to Bahnsen’s salon photos, which were housed at Wright State University and were those he had made and exhibited in his life, knowing that they were the ones he apparently valued the most.

3 Responses to “Bahnsen’s photos to be honored”