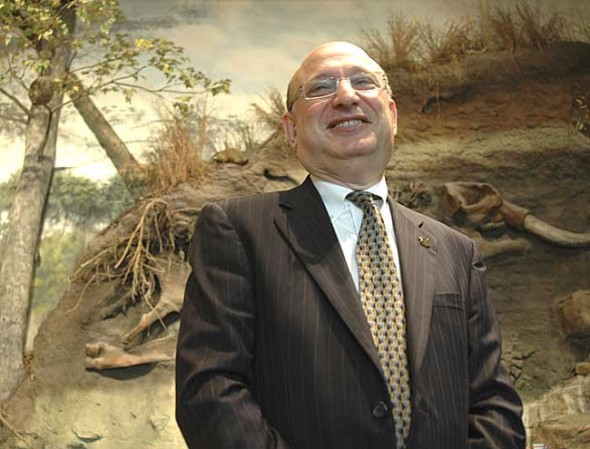 Meister is a boon for Boonshoft

It’s as if Mark Meister’s whole career led up to his current post. He served as founding director of a children’s museum in Minneapolis, headed the nation’s largest archeology organization and directed science and art museums around the country, always with a focus on education.

The varied skills and experiences he gained in these posts have proved useful during the last decade to Meister, now the president and CEO of Dayton’s Boonshoft Museum of Science and Discovery. He feels a perfect match for a place that’s an all-in-one science museum, natural history museum, children’s museum, archeological research institution, zoo and purveyor of informal science education.

“It’s almost like I was preparing myself to be here,” Meister said, adding, “the only thing I hadn’t done is a zoo.”

Having just overseen the $1.1 million expansion of the Boonshoft’s animal exhibit, which opened earlier this month, Meister can now count zoo management among his professional accomplishments.

“This is an unusual place and it lends highly to my background,” the 57-year-old Meister said, pointing out his background is unusual, too.

Meister, as the president and CEO of the Dayton Society of Natural History, runs not only the Boonshoft in downtown Dayton but also Sunwatch, a restored Native American village in Dayton, and Fort Ancient, a prehistoric archeological site outside of Lebanon.

“We use [the sites] to appreciate the history and culture of the area and understand the life-ways of people who lived here,” Meister said of Sunwatch and Fort Ancient, which host educational programs and visitors.

At the 94,000-square-foot Boonshoft, a planetarium, observatory and universe exhibit teach astronomy, laboratories and science theaters demonstrate science experiments, a “Be Green” home and tree house explain conservation, and an extensive collection of natural history items and animals impart geology and ecology lessons. And since it merged with the Children’s Museum, numerous hands-on activities, such as a massive river with locks and dams, allow children to learn from play.

“It’s play as learning in a hands-on, experiential, learning base,” Meister said, adding that the museum provides serious informal science education to school children, college students and the public, reaching more than 200,000 children and adults each year.

Meister, who lives in Yellow Springs with his wife, artist Carla Steiger, traces his own 33-year career in nonprofit leadership to an interest in archeology at a young age — a passion he hopes to instill in those who visit the museum.

“We want kids to be able to explore and try out things they’re interested in,” Meister said. “We’re providing the spark for young people to develop an interest in science and natural history.”

After studying American art and Greek Minoan and Mycenaean archeology at Washington University in St. Louis, Meister found he could either become a professor or museum director. He chose the latter, and after a degree in museology went on to direct his first museum at age 24. There Meister presided over a staff of two — the janitor and the secretary. Today he leads 55 full-time and 30 part-time employees and oversees an annual budget of $4.2 million.

“I learned how to do it all,” Meister recalls of his early career, which he spent in small museums around the Midwest.

Then, after helping to found the Minnesota Children’s Museum and directing an art, science and industry museum in Bridgeport, Conn., Meister returned to his love of archaeology, serving a 10-year stint as the executive director of the Archaeological Institute of America.

At the nation’s largest archeology organization, which serves both professionals and amateurs, Meister oversaw a 215,000-circulation magazine he once subscribed to as a teenager.

“It was getting back to my root interest in old-world archaeology,” Meister said. “But I never lost my sense of being a museum professional.”

So when Meister was approached for the Dayton job, he jumped at the opportunity, and since 2000 has led the 52-year-old museum through a time of expansion.

Among his accomplishments, Meister strengthened the museum’s education department, especially its robotics program, refurbished Sunwatch to increase its opportunities, negotiated for a new Montessori preschool program at the museum, wrote many successful grants, including a recent $813,000 NASA grant to host the only publicly-available heliostat, which transfers sun surface images, and oversaw the upgrade of the museum’s zoo.

“It’s a huge improvement,” Meister said of the animal exhibit, which previously featured only Ohio animals and little in the way of educational signage. Now it has exotic animals, extensive information on animal adaptation and conservation and more naturalistic exhibits. The zoo also helps to preserve the kinkajou, a monkey-like rainforest species.

Meister’s work is paying off. The 2009 membership of the Dayton Society of Natural History was its highest ever, with 7,000 member families and about 28,000 total members. It’s continuing to grow despite challenging fundraising conditions.

“We’re proud of the fact that during the financial downturn, we’ve maintained our staff,” Meister said.

For his work at the Boonshoft, Meister was named the 2008 Ohio Museum Association Professional of the Year. And last spring he was invited by the Association of Science-Technology Centers to present a paper in Beijing, China, on science center outreach and educational programming, long his specialty.

“Mark is a phenomenal leader with vision at the museum,” said Steiger, his wife and biggest fan. “He has become a prominent Dayton leader — he truly took Dayton into his heart and made the area, including Yellow Springs, his home.”