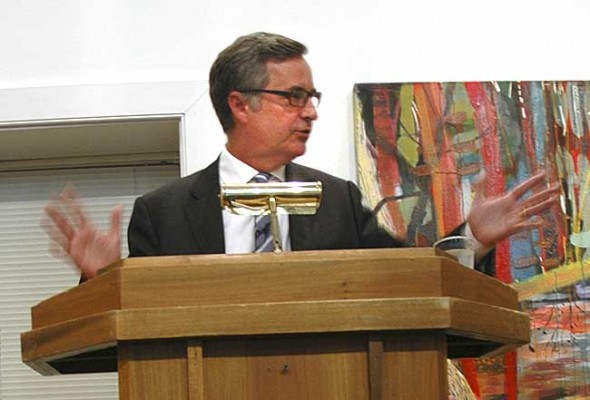 Mark Roosevelt is the new president of Antioch College, following a vote by the college pro tem board of trustees on Sunday, Oct. 17.

“The board voted unanimously to appoint Mr. Roosevelt to the college presidency. He has spent his career as an advocate and an agent of institutional change,” said Lee Morgan, chair of the pro tem board, in a college press statement.  “The board is confident it has selected a strong leader who will guide the College on its road to revival.”

Roosevelt, currently superintendent of the Pittsburgh Public Schools, has already resigned his Pittsburgh job effective Dec. 31. He will start his new position at the beginning of the year, according to Antioch College Communications Director Gariot Louima. Roosevelt, his wife, Dorothy, and their 4-year-old daughter will move to Yellow Springs.

“I am honored to become the next president of Antioch College and inspired by its history and the many people who made the College such a remarkable place to learn and work,” Roosevelt said in the statement.

Interim President Matthew Derr will continue as the college’s chief executive officer until Roosevelt begins his job, according to the statement. In January, Derr will begin a new position as visiting fellow at the Great Lakes College Association, or GLCA, in Ann Arbor, Mich.

The board vote came at the end of the college’s Founders Day weekend, a three-day celebration of the college’s 160-year history and its first year as an independent  liberal arts college since being closed in 2008 by Antioch University. The revival followed a two-year effort by alumni to resurrect the closed college.

Roosevelt, who visited campus last week, was one of two finalists for the presidential position, but the second finalist dropped out due to that finalist’s discomfort with the public nature of the last stage of the process, according to Louima. Last Wednesday, Oct. 13, Roosevelt gave a presentation and answered questions at a well-attended public forum on campus.

At that event, Roosevelt described as “awkward” the call he received from the college’s search firm months ago, when the firm asked if Roosevelt would consider being a candidate for the presidency of a college that was at the time closed.

“You kind of absorb the words,” he said, speaking of his surprise. “Then they told me it was Antioch. Those words had power to me.”

The week before coming to campus, Roosevelt had resigned his job as the Pittsburgh schools superintendent, which he held for five years. During that time, he led the schools through an ambitious reform effort. When he resigned from that position, Roosevelt stated that he was a finalist for the Antioch College presidency, and that, if offered the position of president, he would accept it.

For a more detailed story on the board decision, see the Oct. 21 News.

One Response to “Antioch board chooses Roosevelt as new president”