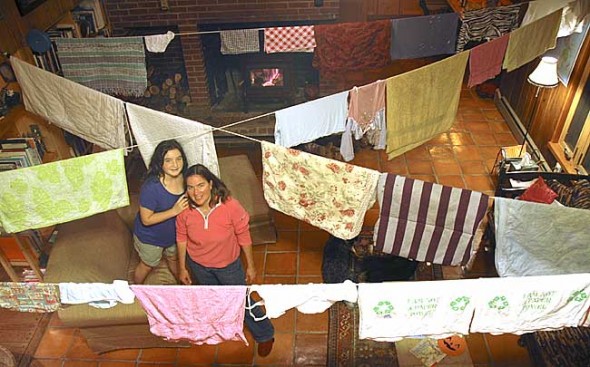 Laura Ellison and her daughter, Alice Miller, strung their laundry across the living room of their Kurt Street home to dry by the heat of the family’s wood stove. They rarely use their mechanical dryer. (photo by Megan Bachman)

Laura Ellison, who has been air drying her laundry since she was 22, doesn’t see her energy-saving act as a sacrifice. Stringing clothes on lines that zigzag her living room in front of a wood stove is a relaxing, almost spiritual experience.

“It’s not like we’re martyrs — we just don’t do what other people do,” she said. While other Yellow Springs residents may use their electric and gas dryers automatically, without thinking, Ellison forgoes the machine with no extra effort.

Now, the Village Energy Board wants to create more clothesline converts out of village residents with an insert in next month’s utility bills.

As part of the board’s work to encourage residential energy conservation, the flyer focuses on how to save energy while doing laundry. It suggests washing in cold water, loading the washer full, drying in low heat, cleaning the lint screen, choosing a gas dryer and, ideally, air drying with indoor clothes racks and outdoor clotheslines.

“There is not one thing that’s a game-changer, there’s a bunch of little things and this is one little thing that people might be willing to try,” said board chairman Jerry Papania, who said that 2 percent of the village’s electric use could be saved if residents green their laundry practices. The board was recently charged with helping the village achieve a 3 percent per year reduction in the community’s electricity use over five years, a goal that Papania said he believes that household conservation can help to meet.

“Outside of exploring for energy contracts with renewable sources, conservation is obviously an impact that we can have here at the village,” he said. “If you’re working toward a common goal, it may encourage people to participate…hopefully it can be contagious.”

The flyer is the first in a series that the board plans to include with utility bills to help residents conserve. Papania will draft an insert on energy-efficient lighting and Energy Board member Larry Electric will write one on saving energy in home heating and cooling. In addition to the flyers, the board is working to identify exactly how much energy villagers are using and in what ways so that Vermont Energy Investment Corporation, the group contracted by municipal electricity provider AMP-Ohio to help the village conserve, can be effective.

For now, the focus is on clotheslines, which are being promoted by board members as everything from a meditative act to a way to add humidity to a home’s dry winter air to a means of meeting one’s neighbor.

“Hanging my laundry is a kind of a meditation that calms me,” said Christine Roberts, co-founder of the Ten Percent Club, an energy-saving support group in the village partnering with the Energy Board on the flyer. “It’s kind of a therapy…it’s very relaxing and doesn’t take that much time.”

Roberts sees that people go to great efforts to save money, but remain unaware of many wasteful practices that could both cut carbon and save cash. The Ten Percent Club, which meets monthly, and the Energy Board can help by disseminating information on how to conserve, though actually affecting change may be a harder task, she said.

For those who say they don’t have the time to air dry clothes or are concerned about wrinkles, Roberts suggests just air drying heavy items like jeans and towels and following the other steps outlined on the handout.

“Everybody saves energy in different ways and they might just have to find another way,” she said of those unwilling to air dry. “You can’t put it on as a guilt trip.”

According to Papania, culture may be an impediment to change. He cited statistics from the nonprofit group Project Laundry List showing that while 92 percent of American households have dryers, only 4 percent of those in Italy do.

But Ellison’s mind is made up. Not only is air drying easier on her clothes and better for her home environment, it has been a way for her to meet her neighbors, chatting over their backyard clotheslines. To her, using a machine rather than throwing her clothes over a line is more work.

“I can’t believe it when people say it’s easier to use a dryer — it’s not.”