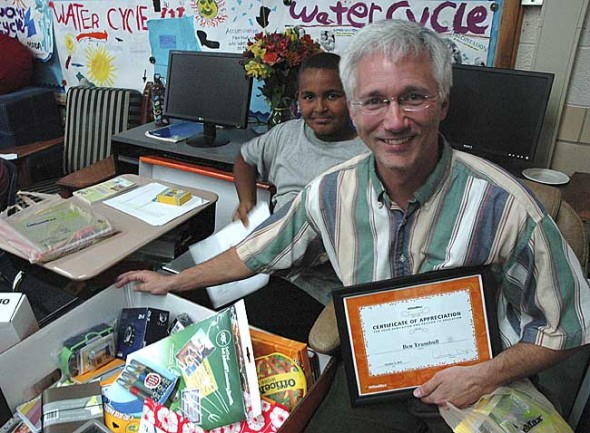 Mills Lawn teacher Ben Trumbull, here with one of his students, Chris Jennings, was surprised last Tuesday, Oct. 5, with $1,000 in free classroom supplies from a local Office Max store. Trumbull, who has taught at Mills Lawn for 15 years, was one of 1,100 teachers nationwide who received the gift. (photo by Megan Bachman)

Last week Mills Lawn teacher Ben Trumbull was in the middle of a math lesson when Principal Matt Housh and representatives from a local Office Max store walked into his classroom with a surprise — a giant box filled with more than $1,000 in classroom supplies.

“When I saw the balloons and flowers I thought, OK, this isn’t a normal visit,” said Trumbull, who teaches third/fourth grade.

The surprise event took place because Trumbull was a winner in Office Max’s national program, A Day Made Better, which provides teachers with materials they often have to purchase with their own money.

“It was well-deserved,” said fellow teacher Jody Pettiford of the award. “It couldn’t have come to a better person — he’s an amazing teacher because he’s an innovator, a go-getter.”

Trumbull’s students cheered and hollered while pulling folders, crayons, markers, planners, a pencil sharpener, a digital camera and a white board from the box, donated in part by a local Office Max in Springfield.

“I think the kids were overly excited, they were going crazy and actually they were very appreciative of their teacher,” said Anna Dyer of the Springfield Office Max. Trumbull was one of 1,100 teachers recognized nationwide on Oct. 5.

“It was exciting,” Trumbull said of the surprise. And though he didn’t scream, Trumbull admitted, “I felt the same way as the students, I just don’t express it in the same way — it’s nice to be appreciated.”

A native of Lansing, Mich., Trumbull, who has taught at Mills Lawn 15 years, came to the district after teaching six years in Maryland. He started at fifth grade until he moved to a combined third/fourth grade class this year, where he is adapting his methods to a younger and more academically diverse age group.

Though Trumbull was recommended for the award by former interim Mills Lawn Principal Ray Combs, Housh, the current principal, was pleased with the selection.

“He’s dedicated, creative and very student-centered,” Housh said. “He’s open to being innovative with the instruction and very interested in integrating technology into his classroom.”

Trumbull’s students have edited their own videos, posted slam poetry on YouTube, interacted on a Wikispace Trumbull set up for the school, mastered Excel and PowerPoint and are learning about energy as part of a recent STEM initiative.

“I feel technology is a great tool, but it’s just one fancy tool a teacher can have,” Trumbull said. “It’s great in today’s society, because that’s where kids are coming from and if you can engage them in that way, it can help.”

Among his fellow teachers, Trumbull is known for his hands-on approach.

“He engages reluctant learners by doing project-based learning activities with them,” said Dionne Barclay, who taught fifth grade with Trumbull for 14 years. “He will go to terrific lengths to find creative and engaging ways to help each student learn.”

Barclay’s son, Chase, who had Trumbull for fifth grade, enjoyed building a flashlight during a science study of electricity and putting together a magazine filled with articles on a research topic.

“The time he spends designing learning activities like this clearly show that this is much more than a job to him,” Barclay said.

In addition to being a dedicated teacher, he is a respected colleague at Mills Lawn.

“He is very easy to work with,” said kindergarten teacher Jeananne Turner-Smith. “He’s very approachable, personable and humorous and he’s an out-of-the-box thinker.”

“His energy and enthusiasm is contagious,” Barclay said. “I always feel inspired to think about the very best ways to work with my own students after I talk to him.”

The classroom supplies will come in handy for Trumbull, who is especially excited to have a new leather chair and a white board onto which to project movies. Pettiford noticed that a few weeks before the school year, Trumbull had already spent hundreds of dollars of  his own money to decorate and equip his new classroom to engage his students.

And in his first year as the Mills Lawn principal, Housh has found Trumbull a great resource, with “his friendly, warm, welcoming attitude and willingness to share what’s been successful in the past,” he said.

“They recognize the importance and value of a good school,” he said.

Visit https://www.ysnews.com to watch a video of Trumbull’s surprise award.