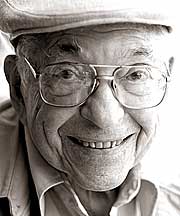 Irwin M. Abrams, a longtime professor of history at Antioch College, a pioneer in the field of peace research and a global authority on the Nobel Peace Prize, died on Dec. 16 at the Friends Care Center, just a block away from the house on Xenia Avenue where he had lived for almost 60 years. He was 96.

Abrams, who had not been ill, had become frail in recent years. He died peacefully, just as he had lived his life, according to his daughter, Carole Morrill, who was his primary caregiver.

Irwin was born in San Francisco in 1914. He graduated from Lowell High School in December 1930 at the age of 16. He went on to earn a bachelors degree from Stanford University and a masters degree and PhD from Harvard University. In 1936–37, Irwin traveled to Europe to do research for his dissertation. It was a formative experience. He met many outstanding leaders and scholars of the international peace movement and delved into previously unknown source materials.

“Abrams opened and explored archival sources on which a generation of historians would come to depend,” the Magazine of History said in a 1994 profile. “His dissertation, A History of European Peace Societies, 1867–1899, won the Charles Sumner Peace Prize and, although it was never published, it has been called ‘the most quoted unpublished dissertation in history.’ Whether or not that is factual, it has the ring of truth, for Abrams’ 1938 work and his subsequent writing gave direction and inspiration to historians on both sides of the Atlantic when the study of peace in history blossomed a generation later.”

In 1938, Irwin met the love of his life, Freda Webster Morrill, on the train from Chicago to San Francisco. Freda was a senior at Mills College and had returned home to Cincinnati for the Christmas holidays. They met at a New Year’s Eve party in the club car of the train as it rumbled across the Great Plains and into the new year.

They were married six months later, in June 1939, on a hilltop overlooking the San Francisco Bay. They had discovered in each other the same playful wit and humor, the same love of music and the arts and most important, the same set of values. In a 1990 article commemorating their 50th anniversary, Irwin said, “One of the reasons our marriage has lasted so long and been so solid is because we both made commitments to something bigger than ourselves.”

After their marriage, Irwin and Freda moved to Palo Alto, where he taught at Stanford, and together they joined the Society of Friends (Quakers). He later wrote that joining the Palo Alto meeting was the final step in a move away from liberal humanism toward the ideal of pacifism and nonviolence. He came to believe that “to change the world you had to change yourself.”

During World War II, Irwin fulfilled his obligations as a conscientious objector by working with the American Friends Service Committee, or AFSC, in Philadelphia. He researched international relief work, directed training for AFSC relief workers from 1943 to 1946 and organized the Quaker International Workcamp Program the following year. During that time, Freda stayed home with their two young children, David and Carole, born in 1944 and 1945, respectively. A third child, James (Jim), was born in 1948.

The family moved to Yellow Springs in 1947 when Irwin joined the faculty of Antioch College. He organized the Department of History and created an introduction to western civilization still fondly remembered by many Antioch alumni. He became a full professor in 1951, Distinguished University Professor in 1979 and “emeritus” two years later.

Throughout his Antioch years, Irwin was nudged beyond the classroom by his Quaker concern for peace, his pioneering studies of the historic European peace movement and his own international experience. He became, as he put it, “a theorist and practitioner” in study abroad and intercultural experience. The number of international exchanges, including study abroad, was rising rapidly, and he saw this as a valuable opportunity to encourage cross-cultural understanding.

After his retirement from teaching, Irwin had set out to write about international education, but a surprise invitation came from publisher G. K. Hall & Company to write a reference book on the Nobel Peace Prize. He considered the assignment for some time before accepting. While such a book might make a scholarly contribution, he felt it also had a role to play in providing positive role models, especially for young people who too often take their cues from pop icons and Hollywood celebrities. We need to do more to celebrate the real heroes of our time, he believed — the champions of peace, of human dignity and of moral courage.

When his book The Nobel Peace Prize and the Laureates appeared in 1989, he was surprised by its reception. It was recognized as an “outstanding reference work” by the American Library Association. Requests for interviews, lectures and follow-up books poured in from many directions. He and Freda were also invited to Oslo to attend the stately Nobel Peace Prize award ceremonies, which they would continue to attend regularly for over a decade.

He went on to publish other works on the prize as well, including Words of Peace, which brings together selections from the acceptance speeches of the prizewinners, and five volumes of Nobel Lectures in Peace.

He once quipped that being an expert on the Peace Prize made him newsworthy just one day per year — the second Friday of October, when the Norwegian Nobel Committee announces the winner of the prestigious award in Oslo. He became a frequent commentator about the prize and the laureates, appearing on CNN, NPR, BBC and elsewhere, and was often cited in the international press.

Of writing about the laureates, he said, “It’s been a rich experience to live with these people all of these years.” He met more than 20 of the prizewinners, including the Dalai Lama, Desmond Tutu, Willy Brandt and Martin Luther King Jr. Another laureate, José Ramos-Horta, the current president of East Timor, considered him a friend. Irwin “led a life of scholarly integrity, intellectual and moral rectitude, compassion and faith in humanity, encompassing a whole century of profound transformation in the history of our small world,” he said.

After Freda died in 1999, Irwin continued to receive invitations to Oslo from the Nobel Institute. They were always addressed to “Irwin Abrams and Spouse.” In 2001, he asked his grandson Scott, a California-based journalist with whom he had worked closely on several Nobel-related activities, if he would like to make the trip and be “spouse.”

It was the first of several trips the two of them would make to Oslo together. The award ceremony for President Jimmy Carter in 2002 was especially meaningful to him, because Irwin had helped Carter win the prize by nominating him for 12 straight years. At the Nobel banquet, President Carter came up to Irwin, his wife Rosalynn at his side, to take his hand and express his thanks. Irwin later said it was one of the high points of his life.

Irwin had a multitude of friends all over the world and was honored on numerous occasions by his colleagues and former students. In 1997, he received an honorary doctorate from Antioch University. In 2000, he was given a distinguished lifetime service award by the Peace History Society and the Peace History Commission of the International Peace Research Association.

In 2003, the Antioch College Alumni Association presented him with the Arthur Morgan Award “for his long and exemplary service to the Antioch College community, the education community and the global community.” Irwin has said that the happiest outcome of his teaching years was when his students in the class of 1955 came together in 2005 — 50 years later — and raised funds for a peace education memorial fund in his name.

He was inducted into the Dayton Walk of Fame in the fall of 2007 and has a square on the sidewalk on W. Third Street commemorating his achievements. The inscription states that “Dr. Abrams brought scholarship and recognition to Antioch University as a scholar, author, educator and humanitarian.”

For all his many accomplishments, Irwin expressed a “gentle greatness,” in the words of one of his dearest friends. His legacy is both a personal and a public one, one imbued with a deep respect for the individual and a genuine belief in each person’s capacity for making the world a better and more peaceful place.

The family would like to express its heartfelt gratitude to all the kind and devoted staff members at the Friends Care Center and to his personal caregiver and sometime assistant John Gray, who lovingly cared for him and attended to his every need over the last couple of years.

The family is planning a memorial service in Yellow Springs at a date to be announced.