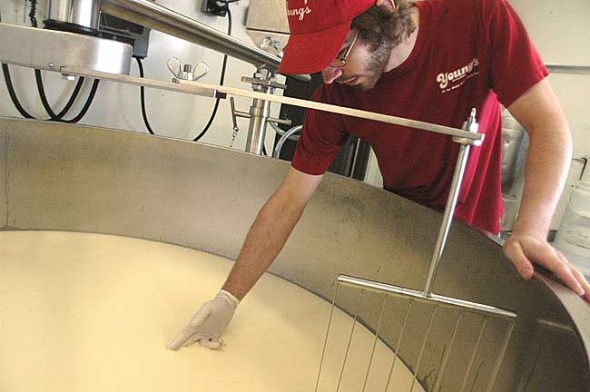 Nick Mronzinski stirred curds at Young’s Jersey Dairy in a cheese vat that has been used to turn the farm’s fresh milk into local cheese for the last 18 months. The yellow cheddar cheese made on a recent visit will be used to top burgers and salads at Young’s restaurants. (Photo by Megan Bachman)

Those who prefer local foods for freshness, taste or a lower carbon footprint can now add a variety of locally-produced cheese to their diets — from aged Ludlows to fresh garlic curds — thanks to two area dairies that have recently been turning fresh milk into cheese.

Young’s Jersey Dairy just north of Yellow Springs, best known for its ice cream, began selling cheese produced on-site in their stores and restaurants 18 months ago, the first time in its more than 50-year history of selling dairy products. Meanwhile, Tom’s Market now carries the cheese that Blue Jacket Dairy in Bellefontaine began commercially producing three years ago — and which diners at the Winds and Sunrise Cafes have tasted in various dishes.

For 30 years Blue Jacket Dairy shipped the milk from its Holsteins to a commercial dairy, until recently, when owner Angel King began experimenting with making cheese in her kitchen. Later she and her husband expanded their production, became a licensed cheese producer and have since given up their cows to focus full-time on fresh and aged goat and cow cheeses like feta, mozzarella and cheddar curds.

King said that whereas Ohio used to be a major cheese maker, there are now probably only 16 small-scale licensed cheese makers in the state.

From 1956 to 2002, Young’s sold the raw milk from their Jersey cows directly to customers. In fact, by 2002 Young’s was the last remaining farm to sell raw milk in the state, according to its chief executive, Dan Young. But since then, the milk produced by its Jersey cows was shipped to Reiter Dairy to be processed into an ice cream mix Young’s would use to make its signature product. Now its milk is used raw or pasteurized on-site to make into Colby, cheddar, Swiss, Monterey Jack and more, which, according to Young, fits with a family tradition of producing food for their stores and restaurants on their 122-acre farm.

“The cheese is a way to get back to some history and heritage,” Young said. “It’s a better product and it’s consistent with what Young’s is — we like to produce things here.”

At Blue Jacket Dairy, quality and freshness are priorities for the cheeses it sells at dozens of stores and restaurants and at the 20 farmers markets per week Blue Jacket attends in Southwest Ohio.

“People think there’s a value in flavor, so the cheeses we select have a lot of flavor because they’re fresh, as opposed to the cheddar cheese block that’s very commercialized and standardized,” King said. “They are not looking to accentuate the flavors that come out in the cheese. Customers can taste the difference.”

As King knows, a variety of factors influence the flavor of a cheese, from the animal’s diet to cultures to the aging process. Young noticed that the cheese produced in early spring, when the Jerseys began eating green grass, was creamier and more yellow in color.

So far Young’s has produced nearly 36,000 pounds of cheese, half of which it has sold directly in its restaurants as cheese slices on burgers, shredded cheese in omelets and as deep fried cheese curds, the Golden Jersey Inn restaurant’s most popular appetizer. Curds account for about 35 percent of Young’s cheese sales, which surprised Dan Young.

“In the business plan, curds were an afterthought,” he said. “Most folks in Ohio don’t know what a curd is.”

Young explains curds to his customers, who are sometimes grossed out by the name, by referencing Little Miss Muffet, who, according to the nursery rhyme, sat on a tuffet eating curds and whey. Curds and whey are the two products that the milk turns into when it begins to curdle after the introduction of rennet, which is vegetable-based at Young’s.

While curds are typically pressed into the more familiar cheese forms of blocks and wheels, they can also be skimmed off and sold fresh, usually within the first few days or weeks at Young’s. To some curds, Young’s adds flavors such as garlic, Italian and Cajun. The whey is then used to fertilize Young’s fields. Blue Jacket Dairy also produces curds, and especially popular are its dill and ranch curds. They feed their whey to Berkshire pigs to produce a “succulent and flavorful pork,” King said.

Young’s also has begun to produce aged cheddar cheese, which is more crumbly and sharper tasting, according to Young. While they used pasteurized milk for their fresh cheeses, raw milk is used to produce cheeses that will be aged, since the aging process itself rids it of any potentially harmful bacteria. In addition, Young’s Applewood-smoked Swiss cheese is smoked on-site the old-fashioned way — with wood chips.

Blue Jacket Dairy also ages some of its cheese, producing an aged Ludlow cheese from cow’s milk and aged Houtz cheese from goat’s milk, as well as a German-style cheese called quark that is similar to cream cheese. And the dairy is well-known for its grilling cheese, which customers say tastes like a grilled cheese sandwich without the bread.

“The world of cheese is very broad,” King said. “It amazes me how we can start with fluid milk and at the end of the process have a few hundred pounds of cheese.”

Young said he is also amazed at the process, which took several months to refine, and which he hopes to continue to improve. Soon his dairy will start to offer New York sharp cheddar.

“We want to keep improving on what we’re doing,” Young said. And while using the dairy’s homemade cheese in its restaurants can be more expensive than using the commercial counterparts, producing and selling food products with fewer artificial ingredients has always been a priority.