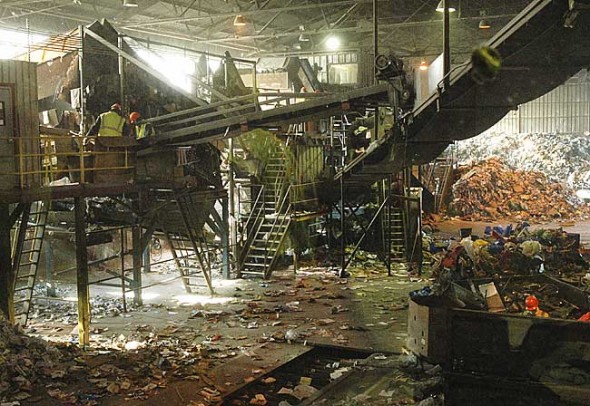 Rumpke’s recycling facility on Monument Drive in Dayton whirred with the movement of belts, lifts, pulleys and crushers last month operating to support the sorting, mashing and packaging of waste materials to be shipped off and repurposed for another use. Recycling is alive in Yellow Springs, but it could be better. (Photo by Lauren Heaton)

Yellow Springs has a relatively good recycling track record. The Village contracts with Rumpke Consolidated Companies, Inc. for residential waste removal, and according to the company’s numbers, Yellow Springers recycle about twice as much as residents of Germantown and about three times as much as Xenia residents. But according to a citizen’s audit completed in October by Ohio Citizen Action and POWER, a group of residents acting to contain Rumpke’s sanitary landfill in Colerain Township, the region should be moving toward a goal of zero waste, the way model communities around the country have begun to do.

According to Rumpke Customer Service Manager Jan Konkel this week, villagers recycled about a quarter of their total waste this past year, or about 26 percent of the waste they produced. Compared to Xenia, whose residents recycled 8 percent of that city’s total waste, and Germantown, whose residents recycled 10 percent, the effort is a good one. But it’s not as strong as communities in California, Massachusetts and Iowa cited in the citizen audit.

The amount of a community’s recycling depends both on the availability of the service and the willingness of residents to participate in the program. The recycling businesses themselves depend to some extent on the resale market to determine what they can accept to recycle, Rumpke spokesperson Molly Yeager said this week.

In the village, Rumpke offers a curbside recycling service for many materials, including metals, paper, cardboard, glass and plastic bottles. According to Dayton Recycling Facility Manager Rich Welker, Rumpke operates a single-stream process, meaning all recycled materials get comingled curbside and are sorted by automation and by hand at the company’s recycling facility. Rumpke accepts a wide variety of things but also rejects a lot for contamination and safety reasons. The Web site http://www.rumpkerecycling.com/residential describes in more detail what can and can’t be recycled and why.

• In paper, Rumpke will accept white, news, manila, magazines, sticky notes, envelopes with or without windows but will not accept candy wrappers, textbooks or dirty plates or tissues.

• In metal, Rumpke accepts aluminum and steel beverage, food and aerosol cans but not scrap metal (except at the buy-back centers), cooking pans, paint cans or coat hangers.

• In plastics, Rumpke accepts only bottles #1–7 as long as the mouth is smaller than the base, including milk jugs, water bottles and laundry detergent bottles. The recycler does not accept plastic bags, food tubs of any size, plastic plates or utensils, plastic toys or frozen food trays.

Last month Village Environmental Commission members visited Rumpke’s Dayton recycling center and the Cincinnati sanitary landfill, known as “Mount Rumpke” because at 1,070 feet, according to CityBeat.com, it is Hamilton County’s highest point. The 334-acre landfill is the sixth-largest waste site in the country.

Waste can be a threat to residents who live near it because of the toxic outgassing of chemicals including benzene, 1,1-dichloroethane, tetrachloroethylene, sulfides and carbon monoxide, which if inhaled can result in headaches, organ damage, developmental disabilities and cancer, according to the citizen audit. The gases from solid waste are also such a threat to the environment that, according to the U.S. Environmental Protection Agency, reducing solid waste is the single most effective way to reduce greenhouse gases.

Rumpke Sanitary Landfill is permitted by Ohio EPA to release 94,000,000 pounds of methane each year, in addition to the methane sold for natural gas recovery. But partly to contain its emissions, the waste removal company has been committed to growing its recycling program, including investing $6.5 million into the Cincinnati recycling center and an anticipated $2.5 million next year for a new glass recycling system at the Dayton site, Yeager said. The company is also offering both curbside and commercial recycling pickup in more areas and making larger recycling bins available for customers who want them, she said.

“We are looking to increase recycling, but it’s not entirely under our control,” Yeager said. “Not everything that society produces can be recycled.”

The market for reusable materials largely determines what can be recycled, Welker said. The paper market, for instance, was buying at $140 per ton in 2008, but after the election and an increase in competition from China, the price dropped to $10 per ton, Welker said. Cardboard, which is Rumpke’s most heavily recycled product by volume, went the opposite way, starting at $10 per ton in 2006 and climbing to $105 per ton in September.

Reducing the waste pile in Cincinnati means action from residents and regional municipalities that send their trash there. The audit reports that other cities have implemented waste reduction plans. A waste consultant for the city of Austin, Texas, for example, recommended that in order to increase its recycling to 50 percent of its waste, the city legislate for and incentivize companies to reabsorb their products and packaging, as well as encourage new companies to produce goods with post-use materials. The city was also encouraged to educate the public about reducing use, reusing items and composting.

Dubuque, Iowa, also aimed to divert 50 percent of its waste from the landfill by instituting a volume-based trash fee and incentivizing domestic, business and construction demolition recycling. The city also discussed establishing a resource recovery park at the site of the city’s landfill, where ancillary businesses such as salvage, repair, electronics manufacturing, scrap lumber processing and other businesses could operate with a steady source of materials.

Rumpke, headquartered in Cincinnati and serving most of Ohio and parts of Kentucky, Indiana and West Virginia, says it is committed to increasing recycling. How much of an increase could depend on the people and businesses around it.