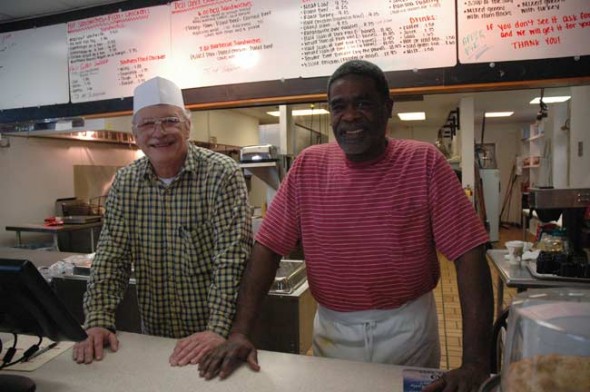 In 1920s Harlem, not unlike today, it was common for tenants to come up short when rent was due. Scrounging funds for housing often had to take a creative turn, and thus the “rent party” was born: community members would come out to hear live music by burgeoning musicians, a hat was passed, and any funds collected would help tenants pay their rent.

Yellow Springers have a chance to attend a rent party right here in town on Friday, Jan. 21, at CJ’s Southern Cookin.’ The event, which will feature music from local band Mack and the Rockets, seeks to benefit the restaurant which, in its first year of operation, is struggling to stay open.

CJ’s Southern Cookin’ opened up last summer just outside of downtown on Xenia Avenue, in a defunct building that had previously housed a KFC. Mack and the Rockets band member Ona Harshaw said she first heard about the restaurant’s troubles when her son was laid off just before December of last year. An admitted fan of the restaurant’s greens, mac and cheese and ribs, Harshaw approached the rest of the band and the owners Carl Moore and Jim Zehner with the rent party idea.

“The restaurant is so far away from the flow of traffic from downtown business that they need something to bring tourists as well as townies out that far to eat,” said Harshaw, citing her idea to hold the benefit at the restaurant during the village’s monthly Third Friday Fling. “CJ’s really hasn’t had the opportunity to establish itself. The restaurant needs community support through this rough patch to give it a real chance at success.”

The party begins at 6 p.m. with music from Mack and the Rockets and a Cajun menu featuring shrimp etouffee, seafood jambalaya and more at $20 per person. Regular menu items, priced separately, will be served until 7 p.m. For more information, call Rita Caz at 767-7713 or CJ’s at 767-2717.

Read the Jan. 20 issue of the Yellow Springs News for a full article on the upcoming party.