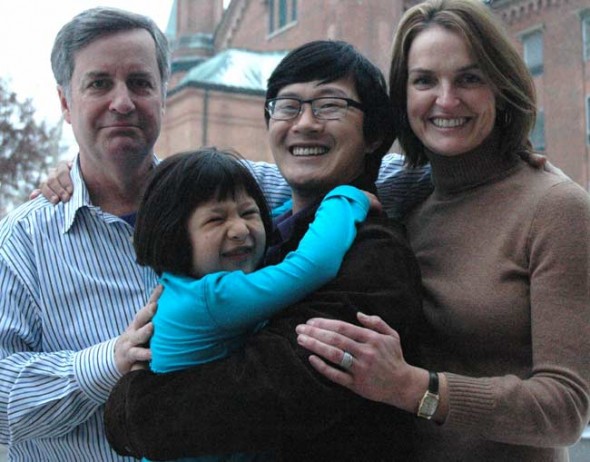 New Antioch College President Mark Roosevelt and his family recently moved to town with his wife, Dorothy, son, Matthew, and daughter, Juliana. Roosevelt said he and his family are looking forward to putting down roots in the Yellow Springs community. (Photo by Lauren Heaton)

Roosevelt ready to lead, and sink roots into community

To some of Mark Roosevelt’s colleagues, leaving a job as superintendent of the 30,000-pupil Pittsburgh school district to lead a reopened small-town college hoping for 25 students next fall did not seem wise. But Roosevelt said he could not pass up the chance to become the first president of a revived Antioch College. Even though he has never been a college administrator, Roosevelt has focused much of his career on reforming education, which he sees as one of America’s greatest failures, and said he believes he has the skills to lead Antioch through this critical period.

“I’ve been a non-traditional applicant for every job I’ve applied for,” Roosevelt said in an interview last week. Particularly attractive about the post at Antioch was “an incredible history and opportunity to re-think the role of faculty, role of co-op and basic questions around foundational curriculum.”

“It’s not about the numbers [of students],” Roosevelt said. “It’s the ideas that help the college come to life, grow and prosper.”

The allure of small town life and the vibrant arts and culture of Yellow Springs also drew Roosevelt to the position, which he begins Saturday. Having grown up in Washington, D.C. and living most of his life in Boston, Roosevelt, 55, along with his wife, Dorothy, 44, wanted a close-knit community in which to raise their four-year-old daughter, Juliana.

Yellow Springs had all of the amenities the couple was looking for — arts, music, good coffee, good food and lots of recreation — and they felt the potential to develop roots in the community. Plus, Dorothy Roosevelt, a former yoga instructor, has an interest in wellness, which also makes Yellow Springs a good fit. The couple recently bought a home on Hyde Road.

Though Mark Roosevelt plans to take in his share of local chamber music and hit the tennis courts (he is an avid tennis player), his focus has been firmly on the college since arriving Dec. 9. And though he said he does not believe the vision for the college should come from him alone, Roosevelt is already full of ideas for Antioch’s rebirth.

“I don’t think it’s an institution where one person articulates the vision,” he said, adding that he will work with board and faculty to build on Antioch’s strengths, like its co-op program, and address its weaknesses, such as student retention, which nationally is only around 50 percent and has historically been a problem at the college. To keep students, Roosevelt is starting to look at ways to better mentor students with academic and co-op advising.

“We make several transitions in life harder than they need to be,” Roosevelt said. “Antioch is uniquely positioned to speak to a better transition between high school to college and college to work.”

Roosevelt also brings a self-described obsession with American history to his new job, having recently taught classes on the historical roots of public discourse at Carnegie Mellon University and Brandeis University. He said he hopes that all Antioch students graduate with an historical understanding of the different viewpoints in this nation, as well as what it means to be an American. Roosevelt admits to being a “total Lincoln fanatic,” who has already adorned his South Hall office with five portraits of the Civil War president.

After serving five years as superintendent in Pittsburgh, where he spearheaded an unprecedented five-year contract with the teacher’s union incorporating performance-based pay and raised millions for college scholarships for students, Roosevelt said he is prepared again to work to bring different groups together for the best interest of students. Roosevelt said he will continue a student-centered approach, along with a focus on workforce morale, in addition to helping Antioch raise the millions of dollars needed to achieve a new vision.

“The college has a history of poverty, which is a morale- and opportunity-depleter,” he said. “This is not an insignificant challenge.”

Educational reform has been Roosevelt’s driving force since he guided passage of an education reform bill through the Massachusetts state legislature in 1993 as chair of the House Education Committee. He said he views education failures as one of America’s massive systemic challenges that has had implications for the nation’s economic competitiveness.

Dorothy Roosevelt also has a passion for education, having worked at Project Zero, an educational research group at Harvard University, where Mark Roosevelt received his bachelors and law degrees. The couple met 10 years ago when Roosevelt’s niece, who was taking a yoga class with Dorothy, introduced them.

Their daughter, Juliana, who was adopted from Guatemala, will attend preschool at the Antioch School, Roosevelt said. He also has a 25-year-old adopted son, Matthew, from a previous marriage.

For Roosevelt, his tenure at Antioch is a new opportunity to pursue educational reform, and his time in Yellow Springs is a chance for small-town life.

“We’re thrilled to be here,” he said of Yellow Springs. “We’re very much looking forward to sinking roots down and becoming part of the community.”