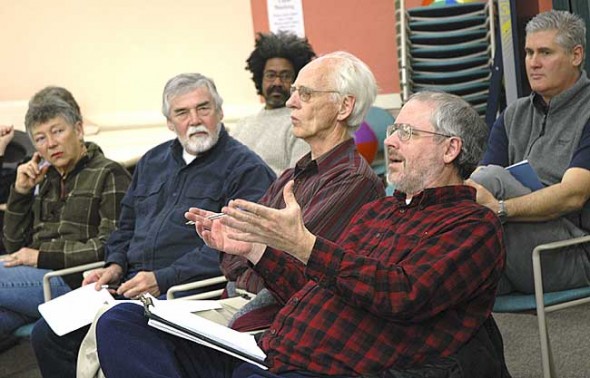 Does Home, Inc. serve moderate-income residents? How will Home, Inc. maintain its houses over time? Are lot sizes at the proposed Cemetery Street project large enough to build livable affordable homes? Is affordable housing even needed in the village, or should economic development instead be the focus?

These were among the questions raised at a public meeting last Sunday sponsored by the James A. McKee Association, when representatives from Home, Inc. shared plans for an affordable housing project slated for Village-owned land on Cemetery Street and addressed what they consider misconceptions about the land trust’s approach to increasing modestly-priced housing in the village. About 50 people attended the meeting.

“If we spend our time fighting with each other, we won’t be able to do what we need to do, and one thing we really need to do is economic development,” said Executive Director Marianne MacQueen to applause from the audience.

Home, Inc. sees new home construction as a key to economic development. The non-profit has invested $2.5 million in the community over the last 10 years in building or renovating 15 housing units for rent and purchase, according to Program Manager Emily Seibel.

“We agree that economic development is a priority for the village,” Seibel said. “It’s obvious we need to create and retain jobs, and jobs and houses go hand-in-hand.”

It was the first of three “community conversations” this spring organized by the James A. McKee Association, a civic group with 22 active members. Upcoming forums will cover the direction of the Yellow Springs schools, on Sunday, April 3, from 4 to 6 p.m. and the Village tax levy renewal on Sunday, April 10, from 2 to 4 p.m. All meetings are at the Senior Center.

Seibel and MacQueen said that local housing costs are high compared to neighboring communities and the median income in the village, argued for the benefits of homeownership, discussed the advantages of the land trust model and described Home, Inc.’s clients.

Of Home, Inc. households, 43 percent are single mothers, 43 percent have children under 18 years old and 29 percent include people of color, Seibel said.

In response to a question from villager Dave Turner, MacQueen said Home, Inc.’s goal is to make 10 percent of the village’s housing units affordable, which would be about 180 houses or rental units. Including efforts by the Greene Metropolitan Housing Authority, there are now nearly 100 such homes in town and nine additional Home, Inc. homes are in the pre-development phase.

Home, Inc.’s houses range from 500- to 1,400-square feet, averaging about 1,200 for a three-bedroom, two-bath home, Seibel said. Local resident Chris Till said the homes would be more affordable if they were smaller, while Enshane Nomoto said that size is too small.

“There’s a market out there that if you don’t meet, you won’t sell your houses,” MacQueen responded, adding that Home, Inc. plans to build larger houses to accommodate families.

While Home, Inc. plans to add more local affordable rentals such as a new efficiency apartment on Xenia Avenue that will be available in May, Seibel said homeownership is still important to promote, citing a statistic that homeowners stay four times longer than renters.

Funding for Home, Inc. projects comes from private donors and public resources, primarily the Ohio Housing Trust Fund and from volunteer labor, donated land and a homeowner’s sweat equity. About two-thirds of all projects utilize public dollars. As a result of these subsidies, the average Home, Inc. sale price is $113,000, compared with an average 2010 Yellow Springs sale price of $236,000, according to Seibel.

In response to a question from resident Kent Bristol, MacQueen explained that in the community land trust model, Home, Inc. retains ownership of the homes, oversees all major renovations and sets the sale prices so the properties remain permanently affordable. Homeowners sign a 99-year lease with Home, Inc. and pay all Village and county taxes.

But villager Jerry Sutton said that since the title belongs to Home, Inc., the debt rests with that organization, which could be called into foreclosure. Currently Home, Inc. has had no foreclosures on its homes.

Home, Inc. is responsible for the long-term maintenance of its homes, MacQueen said in response to a question from resident Sue Abendroth. And though Home, Inc. routinely upgrades its homes between sales, it is still considering the best ways to finance and complete major improvements to its properties.

Last week Council unanimously approved a memorandum of understanding, or MOU, written in collaboration with Home, Inc. to build four affordable homes on 0.7 acres of Village-owned land on Cemetery Street using the community land trust model. Home, Inc. has not been chosen as the developer but is expected to submit a proposal once the Village sends out a request for proposals, the next step in a process that may take two to four years.

The MOU specifies that the Village will sell the land for half of its appraised value, which is estimated at $160,000, so the organization can leverage the Village donation to acquire more subsidies, which MacQueen said would be around $200,000.

“Affordable housing is very competitive,” MacQueen said. “Selling it at half its value puts us in a better competitive position to bring in more money.”

The land would not be transferred to the developer until all funding is in place, she added.

Still, there are many issues that need to be resolved, including determining if the land, which is zoned conservation, has any conservation value that needs to be protected with a deed restriction or other mechanism, MacQueen said.

“I see an awful lot of resistance to this project,” said Paul Abendroth, who questioned putting the project in the greenbelt on land that slopes down precipitously to the creek.

Sutton said he was concerned the small lot sizes of approximately 50-by-75-feet wouldn’t be adequate for families. He added that about half of lots in the village are twice that size and even still, many homeowners own adjacent vacant lots to have sufficient space.

MacQueen said she appreciated that the meeting brought together supporters with those who may disagree.

“Council meetings aren’t a place for people to talk together — they’re just not set up for it,” MacQueen said. “So in setting up these forums, the James A. McKee Association is doing a great public service.”

“It was a phenomenal turnout,” said James A. McKee Association President Rick Kristensen, who is also a Home, Inc. board member. “I think it clarified a lot of misinformation out there and gave people a chance to get their questions answered.”