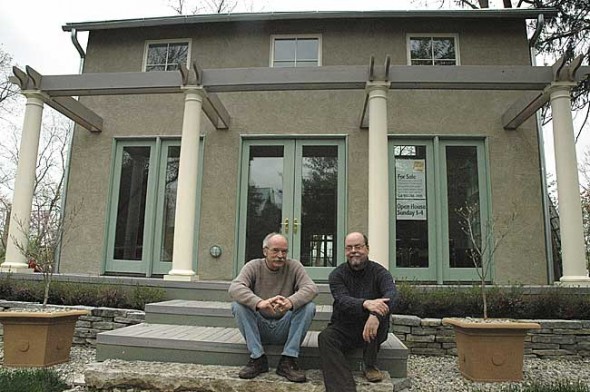 On a modern rehab on North Walnut Street, Erik and Deirdre Owen of BauWow construction company gave an old 19th-century house new life, with the help of Bob Bingenheimer and Deb Slater Pictured are, from left, Bingenheimer and Erik Owen. (Photo by Megan Bachman)

Call it the Miracle on Walnut Street. A dingy, dilapidated house — the eyesore of the neighborhood — is transformed into a stately, sleek modern home with a neighbor’s investment and a local couple’s vision.

“We had our money in the stock market and thought, ‘Why not instead put the money into something that’s good for the community and that improves the community?’” said Bob Bingenheimer, the neighbor who financed the project with his wife, Deb Slater.

The 1,600-square-foot home at 209 North Walnut Street celebrates the original structure’s 19th-century heritage with cedar shingles and wood-paneled ceilings; it pays homage to classic architecture with columns, symmetry and large, inviting spaces; and it has a modern sensibility with picture windows, high ceilings and tall doors and handcrafted pottery sinks.

“We tried to stay true to original architectural intent because of the neighborhood,” said Erik Owen from BauWow construction company, who designed and built the project with his wife, Deirdre. The home’s roofline and original footprint were kept, even though the house was completely gutted, except for several oak studs and three walls. What was once the entire house — which was built in the late 1880s, didn’t have a kitchen and likely housed cows — is now an airy, spacious living room.

“I just love the fact that it was resurrected because it was a lovely house and deserved a second chance,” said Deirdre Owen. “Opening it up just turned it into a gem.”

The house, currently listed at $329,000, shows off BauWow’s signature combination of aesthetics and efficiency previously demonstrated in its houses on King Street, Stafford Street, Yellow Springs-Fairfield Road and the couple’s home on Glen Road. It has wood floors, access views, tile and marble but also tight construction, passive solar windows and a super-insulated floor.

To Owen and Bingenheimer, the house is a deal at $329,000, since many of the materials used to build it were sourced wholesale (a $60,000 window package was bought for $7,000). And though the price per square foot is high, the house was built small for a reason.

“This is the epitome of the not-so-big house, where you don’t have many square feet but better square feet,” Erik Owen said. “The trend is to move everything to small footprints, so you gain energy efficiency and lifestyle efficiency — you’re not cluttering up your life with stuff.”

Bingenheimer is pleased with the outcome of his investment.

“We’ve improved the eyesore of the neighborhood, employed local people and increased the local tax base,” Bingenheimer said. “I think it’s beautiful.”