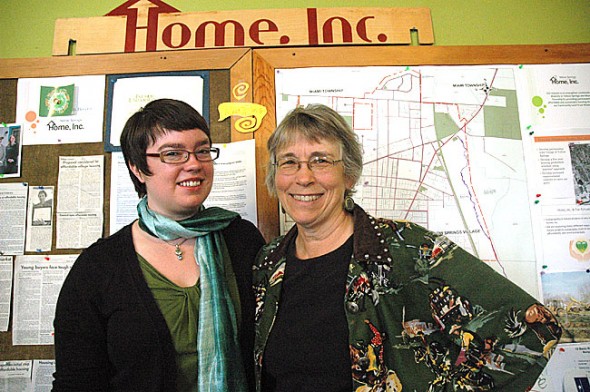 Emily Seibel, left, takes over as the executive director of Home, Inc. next month when Marianne MacQueen, the affordable housing group’s founding board member and first director, steps down after more than 10 years at the helm. (Photo by Megan Bachman)

Almost four decades separates Home, Inc. founding board member and first director Marianne MacQueen from her successor, Emily Seibel. Handing over the organization to the next generation was intentional to MacQueen, 66, who steps down next month from the local affordable housing group after more than 10 years at its helm.

“It’s time for me to leave and we need younger, energetic and passionate people for the staff of the organization,” MacQueen said in an interview last week.

Reflecting on the transition, MacQueen said she is satisfied to have built a strong nonprofit but disappointed that more progress couldn’t be made, while Seibel, 28, is both nervous and optimistic as she prepares to take over as executive director.

MacQueen has led local affordable housing efforts since the mid-1990s, first exploring the land trust concept while at Community Service, Inc. and later helping to found Home, Inc. in 1998. During MacQueen’s tenure, Home, Inc. leveraged more than $2.5 million in outside investments to build or rehab 15 homes and serve 30 local residents using the community land trust model, where the land is held in trust so the property remains permanently affordable.

But MacQueen said she is “tired of fighting,” and though she would have liked to leave having built more and a greater variety of owned and rental units, Home, Inc. has been a success. Limiting the organization has been the always-risky nature of housing development, increasingly scarce public and charitable funds for affordable housing groups and nonprofits in general and local opposition to land use changes.

“I’ve been very surprised and disappointed at the resistance to Home, Inc. and the affordable housing work in Yellow Springs,” MacQueen said. “As long as we meet resistance, the harder we have to work and the less we can do.”

MacQueen retires to focus more on her roles as a Friends Care Community board member and proprietor of the Village Guest House, feeling that Home, Inc. is in good hands with Seibel, who has been the program manager since 2009.

In addition to being passionate and competent, MacQueen said that Seibel is “very bright, has a strong work ethic and loves Yellow Springs.” A 2006 Antioch College graduate, Seibel was hired and trained using a portion of a Morgan Family Foundation grant. She completed more than 25 affordable housing trainings and earlier this year was certified as a housing development finance professional by the National Development Council.

“Emily brings an incredible amount of energy and thoughtfulness in whatever she does,” said Home, Inc. board member Len Kramer on the leadership transition. “She brings a real passion for our mission and that’s priceless.”

“It’s incredibly rewarding and empowering to be able to help families like me,” Seibel said, since she herself grew up in a low-income household.

While not planning any major changes to the organization, Seibel said she hopes to “ignite” Home, Inc.’s work by exploring the potential of senior apartments, the eco-village concept, artist work-live lofts, and workforce housing for local industries.

Seibel said she is most concerned about the decrease in state funds for Home, Inc. operating expenses, which are about $100,000 per year. Now Home, Inc. will have to depend more on local support, according to MacQueen. Yet Seibel is also optimistic because of the support of a strong board and many villagers. Home, Inc. counts approximately 10 percent of the community as dues-paying members and has had about 75 regular volunteers to help out.

“As heartbreaking as the resistance [to Home, Inc.] is, I’m equally inspired by how willing people are to give their time,” Seibel said.

MacQueen leaves the organization with a veteran board, including those with experience in banking, real estate, and housing development, she said.

“We’re so fortunate to have young staff but also older and middle-aged people on the board — it creates a really strong organization,” MacQueen said.

Hired in Seibel’s place in the program manager position was Tom Clevenger, 29, who has five years of nonprofit experience, most recently as the projects administrator for Yellow Springs Kids Playhouse. He was previously a contractor’s apprentice and college recycling coordinator.

“[Clevenger’s] incredibly intelligent and I was impressed with his immediate, relevant nonprofit experience and his kindness,” Seibel said.

Seibel has learned a lot from her mentor, MacQueen, who will continue to consult with the organization during its transition.

“[Marianne] has worked really hard and that resolve is something I will take with me the rest of my life,” Seibel said. “She’s a great leader and coordinator and she’s really good at inspiring people to come together.”

In the meantime, many Home, Inc. projects are in progress. The group recently completed and rented an affordable rental rehab on Xenia Avenue, and construction should begin this fall on two Home, Inc. houses on Davis Street. In addition, Home, Inc. was the only organization that submitted its qualifications to develop four affordable homes on Village-owned land on Cemetery Street in a potential public-private partnership.

Seibel said she is particularly excited about this larger development so Home, Inc. can more quickly meet the needs of the 11 families currently on its waiting list and because a Village partnership is symbolic of community support.

Despite her worries about funding, Seibel looks forward to the opportunity to help local families in need.

“We’re more challenged in terms of funding for operations and projects, but it’s also the time when there’s the most need and when we can make real and lasting change,” Seibel said.