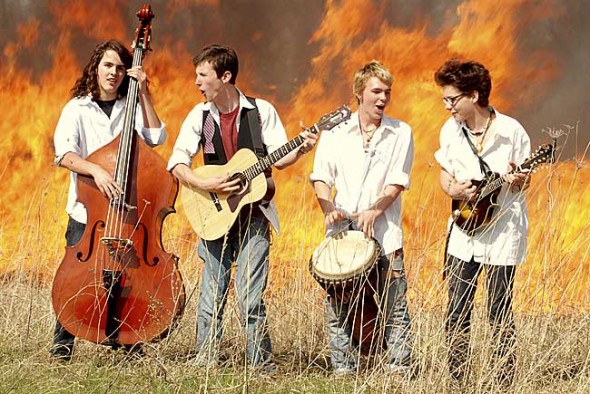 From left, local teens Sam Crawford, Rory Papania, Jamie Scott and Sam Salazar are Wheels, a homegrown band celebrating its first CD. Wheels will perform at a release party for “Fields of Fire” on Sunday, May 29, at 8 p.m. at the Canal Street Tavern in Dayton. (Submitted Photo by Savanah Amos)

Listening to local band Wheels — the poetry of their lyrics, the crispness of their music and sweetness of their harmonies — the listener may not believe that this group of teenagers have played their instruments for just a few years. Now the quintessential homegrown four-piece band, delivering jaunty folk music with bluegrass roots, but with pop harmonies (think Bill Monroe meets the Beatles) has a full-length album to its name and a growing reputation— all in a little over a year.

Wheels will play songs from “Fields on Fire” at a release party for the CD on Sunday, May 29, at the Canal Street Tavern in Dayton. The show starts at 8 p.m., is open to all ages and costs $5. With a debut album Wheels hope to take its act to the next level — to play more shows, write more songs and get recognized by national acts, including their musical heroes and principal influence, the Avett Brothers.

Not too bad for Yellow Springs teens Sam Salazar and Sam Crawford, both 14, and Rory Papania and Jamie Scott, both 16, who began as a street act busking for spare change.

“Wheels is a serious treasure of Yellow Springs,” said Tim Berger of Exceptional Sounds, sound engineer and co-producer on Fields on Fire. “What a brilliant collaboration of four people,” he added, and not just for their age.

In their live shows, Wheels adds a dynamism to traditionals like “I’ll Fly Away” and “Angel Band” and covers of John Prine, Gillian Welch and The Band while impressing with daring originals about lost love, friends in trouble and childhood.

“People said we were Americana or folk, which we didn’t like,” Salazar said. So the group takes folk and bluegrass tunes and ‘wheels them up,’ adding their sweet harmonies and a funky groove to make it danceable.

Wheels also performs at the Clifton Opera House on Wednesday, June 1, at 7:30 p.m., at the Yellow Springs Street Fair on Saturday, June 11, and at the Emporium wine tasting in August.

What became Wheels was seeded in the summer of 2009 when Salazar and Papania — having just returned from Friends Music Camp, where they met — started picking a ukulele and guitar together in front of Tom’s Market. They would lay down a black Bob Dylan songbook in front of them and jam for six-hour stretches.

A few months later, Scott, wanting to get in on the fun, picked up a harmonica and joined in. The threesome’s light, cheery sound and beautiful three-part harmonies went from precious to powerful when Scott began mixing in hand drums and upright bassist Crawford was added to the lineup at the end of last year.

“It felt like something was missing,” said Papania of the group before Crawford, whose nickname among band members is “Manchild,” joined. “The songs sounded kind of empty.”

The album features eight original songs by Salazar, Papania and Scott, all singers and songwriters who take turns as the lead vocalist and together harmonize at choruses. Salazar’s vocals have a rock edge, Scott’s a sweet tenor and Papania’s a soulful depth. Together, they blend beautifully.

“I thought some of their harmonies were as stellar as Crosby, Stills and Nash,” Berger said.

Papania is the band’s principal guitarist and most experienced musician, having played the guitar for just over three years, while Salazar chimes in with bouncy flourishes at the mandolin and ukulele, instruments he’s played for just a year-and-a-half.

“Sam is just a genius, a child prodigy,” Papania said. To his band mates, Salazar is the Bob Dylan of the group — a poet and natural performer. Scott is the band’s Frank Sinatra, with a jazzy vocal style and passion to spare, while Papania’s style resembles fellow guitarist George Harrison and Sam Crawford is the Thelonious Monk of the stand-up bass, band members said.

“Playing live, there is so much more energy and a much more intimate connection between us,” Salazar said. Salazar plans to slip a copy of Fields on Fire to the Avett Brothers at their concert this weekend.

The lead track, “Sticks and Stones” exemplifies the band’s rich barbershop-style vocals, driving rhythm and Salazar’s nostalgic lyrics and silvery mandolin solos. Papania’s “Those Days” features his bluesy baritone along with tempo changes and dramatic mandolin interludes. Scott’s wholesome, heartfelt voice shines through on his song, “Sit Down,” about an elder imploring a young person to listen. In “I’m Going Back” Salazar sings ironically about returning to “sweet Ohio,” with its harsh winters:

Wheels quickly graduated from street corners to open mic nights at Peach’s and Brother Bear’s to paid gigs at area bars and concert venues and eventually to festivals around the state and region. They played at the Highland Spring Jam in Terra Alta, West Virginia, last summer to a crowd of more than 100 people, including a memorable attendee named “Sometimes” who danced wildly to their music donning a ceramic mushroom as a hat, and at the historic Newport Music Hall in Columbus last New Year’s Eve as the opening act for Ekoostik Hookah.

“It was crazy — I don’t want to say we were out of our element but we were close to it,” Scott said of the Newport show, attended by about 600 people. To Papania, it was a “larger than life experience.”

This summer the band will return to West Virginia and also has gigs in Cleveland, Marietta and Dayton. The future looks bright for Wheels, who hope to keep “rolling on,” as their band name implies.

To Berger, Wheels’ music seems inspired by nature and by the town of Yellow Springs. It’s fitting that the band thanks the entire community in the album’s liner notes.

“The sound comes from the community of Yellow Springs that they grew up in and are a part of,” he said.