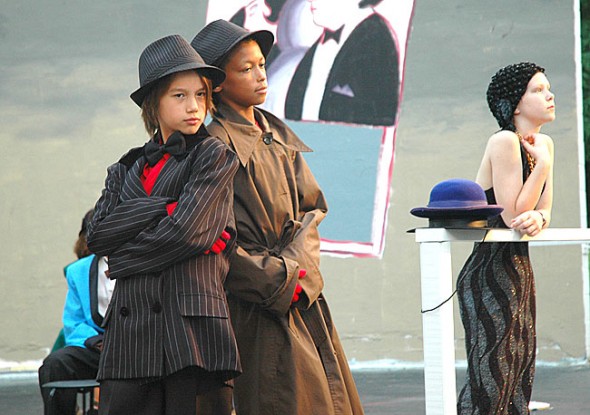 At the entrance to The Cotton Club, Old Hostess (Greta Kremer) stands by to receive the nightly guests, while gangsters Speak Easy (Jonah Trillana) and Peg-leg Bates (C.J. Johnson) lean in to wait for their boss, Big Frenchy, to enter and hustle up some dough for their bootleg hooch. The joint really starts jumping when the band starts tootin’ for the YS Kids Playhouse production of The Cotton Club, begining tonight, Thursday, July 7, at 7:30 p.m. at the college amphitheater. The show runs this weekend and next. (Photo by Lauren Heaton)

Hey, did you hear? There’s a new juice joint in town! Out in Harlem, aka the Antioch College Amphitheater — run by the bosses at YS Kids Playhouse. They say it’s the cat’s meow, but you gotta be a big cheese to get in, or else you gotta be one of the swells. Aw, but the dames and hoofers — they’re hittin’ on all sixes, and the music is so nifty it’ll knock your socks off. It’s called The Cotton Club, and the show starts tonight. Anybody who’s anybody will be there.

It’s the Cotton Club Stompers who rule the night, playing the darlings of swing and Duke Ellington favorites under the direction of John Fleming in this original play about the 1920s New York jazz club. Musical director and chief box (keyboard) pounder Neal Kirkwood is joined by Josh “Easy” Seitz on the clarinet, Claire “Southie” Heister on the sax, Mike “Cincy” Kremer on bass, Skip “Doc” Leeds on guitar and others to heat up the scene. They play for the gorgeous flappers and fan girls Azsa Coleman and Louresha Cheatom, who ankle to the joint every night to help band leader and M.C. Cab Calloway (Lela Dewey) to entertain the likes of an English tycoon (Lucas Mulhall), an Argentinian cattle baron (Marya Weigand), and world heavyweight champion Jack Dempsey (Gabe Trillana). They are all graced by the presence of most distinguished guests, Cornelius Carnegie Rockefeller (played alternately by McKenna Banaszak-Moore and Taylor Tocci), Edgar J. Hoover, (Alex Thorp), with his floozy Anita Loos, (Sage HaleWolfe).

But no one gets into the joint without a cold once-over by the shrewd Old Hostess (Greta Kremer).

The night club, run by Boss Own-y, played by Lenaya Leeds, is the talk of New York in the 1920s. Its guests and their star-studded lives are reported in the papers by a burgeoning new style of press “agents” like the famous Walter Winchell, (Nia Stewart), and others played by Isabella Ehret and Reese Elam. The club also attracts the seedy-side likes of Big Frenchy (Jason Sine) and his henchmen, Speak Easy (Jonah Trillana) and Peg-leg Bates (C.J. Johnson).

Some trouble with the pugilist and an arrest serve to thicken the plot, but the real color of the show is in the music and dancing that characterized the roaring 20s and popularized the Ellington hit, “It Don’t Mean a Thing (if it ain’t got that swing).”

According to Kirkwood, The Cotton Club was the venue that launched Duke Ellington, one of the major figures in the jazz world. The club’s large stage pushed Ellington to arrange for expanded parts and harmonies that gave rise to the big band. Bubber Miley and Tricky Sam Nen started using the newfangled plunger mute, which gave their brass instruments the grunge sounds that went with the “exotic” flapper dancers and became known as “jungle” style entertainment. Many of the style elements came out of a black culture that the white populace wanted to experience, according to John Fleming, who wrote and directed this summer’s show. While the youth talked about the big role that cultural segregation played in the era, YSKP made a conscious choice not to include that element in the show.

Rather, Fleming said, The Cotton Club highlights the characters and the high style of the urban ’20s, with its prohibition-era gangsters, a maturing newspaper and radio media that gave birth to celebrities and the attitudinal jargon of the jazz age.

Banaszak-Moore’s “Corny” character has to have the attitude to go along with the period she sees as the time of jazz and gangsters, she said last week. She has fun playing the richest man in the world, and likes it when she hands a ruby to the hostess, who says, “You’re the king of the shack for as many nights as you can pull bills off the roll.” Though YSKP’s “shack” serves bootleg milk and heavy cream, it’s really the music and dancing that Shekinah Williams, who plays Kitty Hello, loves about the show. And she thinks others will love it too.

The show runs from Thursday–Saturday, July 7–9, and Thursday–Sunday, July 14–17, at 7:30 p.m. The show on Friday, July 15, will include a Carnival of street performers, beginning at 4 p.m. at the amphitheater. Tickets are $10 for adults, $5 for students and seniors; children 3 and under are admitted free of charge.