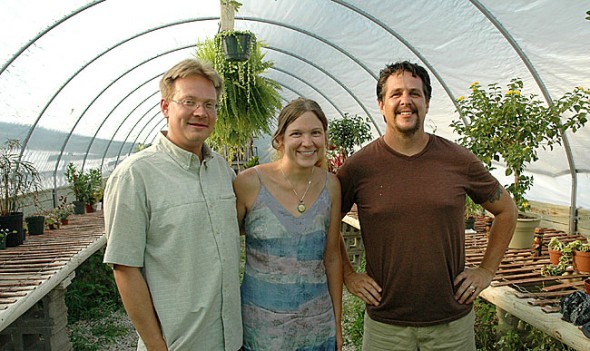 Yellow Springs Botanicals, made up of the plant enthusiasts, from left, Mitch George, Erin Currier and Kyle Lewis, is a new exotic and rare plant business opening on the Village property formerly occupied by Stutzman’s Nursery. (Photo by Megan Bachman)

Exotic plants take root on US 68

When a group of plant enthusiasts took over the Village property on U.S. 68 North that was formerly the home of Stutzman’s Nursery, the weeds were so high that the property’s dozen greenhouses were barely visible above them. After four months of clearing eight acres of weeds and debris, repairing greenhouses and formulating a business plan, a new company — Yellow Springs Botanicals — has been born.

The green thumbs behind the vision are Mitch George, owner of Village Greenery, Kyle Lewis, an Antioch College landscaper, and Erin Currier, a social worker in Springfield, all Yellow Springs residents who want to share their love of plants. As they continue to clean up the site, which has lain fallow for two years, the new company’s principals are also looking for funds to seed their new rare and exotic plants business, with hopes of opening by next spring.

“We can’t compete with Lowe’s and we don’t want to compete with them. We want to carry things they don’t,” said Lewis, who has a degree in horticulture.

The new company is looking to raise $150,000 over the next few months to continue renovating on-site structures, purchase solar hot water panels to heat their greenhouses and pay its principals. Inheriting the remains of the Stutzman’s operation has been both a boon and a challenge.

For more than 20 years the land was rented by Stutzman’s Nursery, Garden Center and Landscaping before the company was evicted in 2009 when the its owner failed to provide evidence of liability insurance.

Yellow Springs Botanicals is a natural extension of George’s Village Greenery, which has sold exotic houseplants from its Kings Yard location for the last four years. George wanted to grow his business by having greenhouses for back stock and to raise his own plants and a botanical garden to show off interesting species and add educational value.

“This could be a true institute for rare plants,” George said. “There’s a whole world of exotic plants.”

Lewis, known locally for an exotic garden at his Wright Street home, said he is most excited to propagate and sell rare native plant and tree species like big leaf magnolias, hardy orchids and pawpaws. He also plans to help re-populate the area with rare native bog plants from the Cedar Bog Nature Preserve in Urbana, with which the company is developing a partnership.

A key feature of their business plan is to work cooperatively with local growers, who can rent greenhouse space to propagate plants and sell their wares on-site in an arrangement that is modeled after the Village Artisans Gallery. Yellow Springs Botanicals will take a share of the sales and require growers to work there as employees. That way, Yellow Springs Botanicals will have knowledgeable and enthusiastic gardeners who can teach customers about plant care rather than laborers with little plant expertise, another advantage over many garden centers, George said.

Additionally, Yellow Springs Botanicals has subleased the back 12 acres of land to Ranch Menagerie, an animal sanctuary run by Nick Ormes, with animals from the Stutzman operation and other abandoned domestic and farm animals.

On a recent evening, Currier celebrated the blooming of an orchid cactus, while Lewis tested different fish emulsion fertilizers for growing irises and George took in the scent of his key lime tree flowers. The three passionate plant-lovers look forward to sharing the beauty of the plant kingdom.

“The discovery within the plant kingdom makes me feel young,” George said. “I’ve seen things I could never dream of.”

For Currier, plants can be an emotional experience.

“Plants make people happy,” she said. “It feels good to watch something grow and thrive and to know that your care for that plant is a big part of its success.”