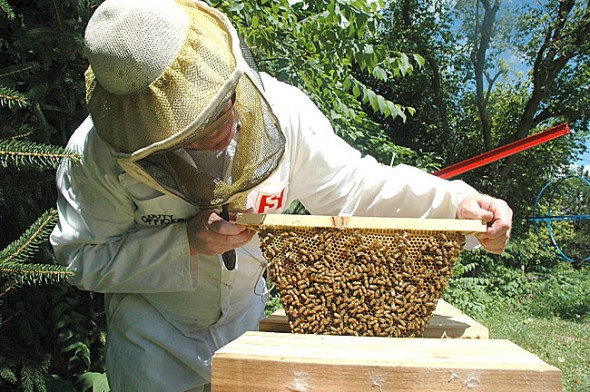 Brian Johnson checked in on one of his hives on a recent warm afternoon, when the bees would be happy enough to let him take a peek. Lifting up a comb on a top-bar hive on Yellow Springs-Fairfield Pike, Johnson said the honey is forming well and will soon be ready to harvest. Johnson is one of a growing group of local beekeepers. (Photo by Megan Bachman)

The village is breaking out in hives

While the number of honeybee hives is rapidly declining around the country, in Yellow Springs they may be increasing. Thanks to village beekeepers, the town’s flowering trees and vegetation might be healthier, backyard gardens more productive and fruit trees more fruitful. But who are these intrepid villagers doing their part for the local ecology and why are they doing it?

To say that keeping bees is a labor of love is an understatement. Stings are frequent, honey yields variable and aggressive hives and swarming are always possible. On a small scale, it’s hardly profitable. Plus there are growing threats of parasites, viral infections and contaminants leading to the dramatic disappearance of bees across North America and Europe known as colony collapse disorder.

Yet more and more villagers are getting hives, according to village beekeepers. Even the town’s mayor keeps bees. So what’s all the buzz about?

“They’re endlessly interesting,” said Joyce Morrissey, assistant to Antioch College President Mark Roosevelt, who sometimes watches her hive from a nearby chair for hours. Retired builder Tom Noftle also “hangs out” with his bees to learn from their highly efficient social systems and said he is doing his part for the environment by keeping them.

“As a species, bees are struggling now because of all of the insecticides and genetically-modified crops,” he said, pointing to other culprits implicated in colony collapse disorder.

For Lynn Sontag, the bee-human relationship is paramount.

“I love that I can be friends with an insect and that I can work with them in concert,” said Sontag, who has kept bees on-and-off for 30 years.

The close relationships beekeepers develop with their bees was evident on a recent afternoon, when Johnson donned his bee suit and bonnet and went out to check on his hives on Yellow Springs-Fairfield Pike. Carefully pulling out the combs he quickly spotted the queen, which is just slightly longer than the other bees, in a hive with about 40,000 residents. The feat seemed impressive, but for beekeepers, it is imperative to keep tabs on their queen.

In a hive, a single queen rules all. The female worker bees gather pollen and make honey and the male drone bees — “the couch potatoes,” according to Johnson — are only around to mate with the queen. Everything revolves around keeping the queen bee alive and happy. In the winter, the bees form a moving ball around the queen to keep her warm, each single bee cycling to the inside and back to the outside every five minutes, Sontag explained.

In her first year, Morrissey faced the ultimate challenge for a beekeeper — her queen died. With her scent fading, after about three hours, the entire hive knew that she was gone. They responded by “roaring,” she said.

“[Roaring] is comparable to them crying,” she said. “They’re putting out a message that they are without a purpose — they’re lost.” Because workers can only lay drone eggs, Morrissey will have to re-queen her hive. Queens can be purchased for about $25 and be ordered through the mail or bought locally.

When a new queen is introduced, she must be protected from the other bees for about a week while they get used to her scent, or they will eat her on the spot, Johnson said. Once they’ve accepted the queen, her new genetic makeup will change the behavior and temperament of the hive. Sometimes if a hive is too aggressive, a beekeeper will re-queen.

Most challenging may be battling the many diseases that can destroy a hive. The Varroa mite, which feeds on baby bees, along with 16 different viral infections, can threaten a bee colony, Johnson said. Colony collapse disorder, which showed up in 2006, is a real danger.

When Sontag started to keep bees in 1980, diseases were relatively rare. Despite decades of experience and having her own commercial operation at one time, Sweet Skies Apiary, she decided last year to take a beginners’ beekeeping class to learn how to deal with these new threats.

Various organic treatments are available to deal with disease. And even stings can be mostly avoided by careful, slow movements, the use of smokers, which cause the bees to engorge on the honey and thus make them less likely to sting, and other precautions, beekeepers said. Still, some beekeepers will admit there’s something slightly crazy about what they do.

“There’s something that’s pretty chaotic when they start to swarm around you,” Morrissey said. “I thought: This is a really crazy thing to be doing with these insects that can sting you.”

Though keeping bees is allowed within Village limits, if a nuisance complaint is made, the beekeeper has 10 days to move the hive, according to a local ordinance. But most potential problems can be avoided by carefully planning bee flight paths so they don’t interfere with the lives of neighbors.

Beekeeping can be challenging, but the benefits flow too. Johnson reported that a walnut tree that had never before produced is now filled with walnuts after bees were kept on the property and that neighbors said their vegetable gardens were more productive. Noftle’s apple trees yield larger quantities of fruit. Beekeepers have honey to eat, sell or give away to friends.

Johnson savors his honey in tea and on toast — comb and all. One benefit of an established hive is that its crop of honey can last for years, he said, adding that honey found in Egyptian tombs is still edible.

But pollination and honey are just the beginning. The social systems of bees offer many lessons for humanity, beekeepers said.

“I think if people in general could cooperate together as bees do, the world would be much better off,” said Noftle. “With no oral communication their cooperation is astounding — we don’t communicate as well.”

Communication inside a hive can be instantaneous, he said. For example, when a bee is squashed, it lets out hormones that alert other bees to the potential danger.

Morrissey gleans secrets for community living and the rebuilding of Antioch from her hives.

“It’s about Antioch but it’s also about the world — we need to stay focused on working together,” she said. Morrissey said she is especially impressed with the cleaning and maintenance that happens in a hive and the entire hive’s “devotion to the cause,” a lesson for Antiochians.

Antioch College may soon keep its own bees on campus as part of its new farm and is, next week, bringing a nationally known bee expert to town. Biodynamic beekeeper Gunther Hauk will speak on the honeybee crisis at the Glen Helen Building on Wednesday, Aug. 31, at 7 p.m. He will also field questions after a screening of Queen of the Sun at the Little Art Theatre on Tuesday, Aug. 30, at 7 p.m.

Hauk is the guru of the top-bar hive, a more natural approach aimed at promoting the health of the bees, Sontag said. By using top-bar hives, beekeepers instead become bee guardians, she said.

Soon, local beekeepers will harvest this year’s crop of honey, leaving enough for their hive to eat to survive the coming winter and leaving the rest up to the bees. That mystery is yet another reason why local beekeepers keep on.

“There’s something mysterious about it and about the fact that the bees have this completely harmonized organization that happens without us,” Morrissey said.

“About the time you have [the bees] figured out, they do something you don’t expect,” Johnson said. He’s even seen two queens ruling a hive side-by-side.

While Johnson said one reason he went into beekeeping was for the solitude, it’s no longer the case in Yellow Springs as more villagers look to keep hives.

“You used to just put on a bee suit and you’ll have all the quiet time you need,” Johnson said. “But in Yellow Springs, people come up to you and ask what you’re doing.”

Sontag can attest to the typical privacy that having hives allows. Her grandfather, a French peasant who kept bees during World War II, hid papers of the resistance in his hives.

“No one will bother your bee hive,” she said.

Bee expert speaks
Nationally renowned biodynamic beekeeper Gunther Hauk will come to Yellow Springs on Aug. 30 and 31 as part of Antioch College’s new sustainability initiative.
Hauk will join the public for conversation following the screening of Queen of the Sun at 7 p.m., on Tuesday, Aug. 30, at the Little Art Theatre. Antioch College is hosting the screening and donations of $5–$10 will support beekeeping education.
Hauk will also deliver a public lecture on beekeeping and issues related to sustainability. “The Honeybee Crisis: Symptomatic for all our Present Crises,” will be presented at 7 p.m. on Wednesday, Aug. 31, at the Glen Helen Ecology Institute, located at 405 Corry Street. Members of the Greene County Beekeeping Association will be on hand with information about local beekeeping classes.