When I was a kid, Halloween was a holiday that could not make up its mind: there were ghost stories, which introduced us to the dark mystery, the tingling awe and fear of things unseen, the whisper of the possibility of life after death. There was also the jubilant promise of candy, one unbridled night of serious, all-American gluttony; sacks full of treats we were to discover, only later, were not to be eaten all at once, but would be meted out over the course of several months, possibly even a full year. The candy my sister and I collected was each year communally poured by our mother into one large, plastic bowl, which she then stored on top of the refrigerator, where we could always see it, but where we had no hope of reaching it. There it sat, forgotten by our parents, but never by us, as we would ask each night, pitiful as Dickensian waifs: “Can we have some? Please?”

Then there was another, real fear, instilled in us by parents and teachers alike: it was the early ’90s, a time when tales of malcontent spread not just through phone trees and word of mouth, but through national media. These stories of broken glass and needle tips, hidden in candy by strangers with vicious intent, meant that our mother inspected every piece of candy thoroughly after we brought it home. If a wrapper looked even remotely tampered-with, if a popcorn ball came from someone whom she did not know closely, these things went unceremoniously into the trash can, a loss we mourned personally and very, very vocally. Such did this fear pervade my mother’s sensibilities, and such was I imparted with stories of rampant candy-tainting, that it was not until a few years ago that I learned that no child had ever been killed or even seriously injured by glass-or-needle-laden Snickers bars from strangers. The notion was not totally fabricated, but like the hook on the roof of the car and the call coming from inside the house, it was, for the most part, the stuff of urban legend.

Outside of all of this, the best part of Halloween was, and still is, dressing up. This is a tradition that, for me, carries on to this day. Even in college, when I was fighting each day to be recognized and accepted as the adult I thought I was, I abandoned all pretense and donned silly wigs and moustaches to assume an alternate identity. The rationale, of course, was that if it’s done ironically, it’s still cool. 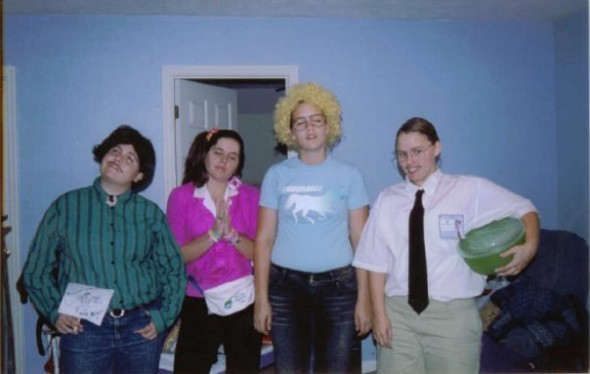 The cast of "Napoleon Dynamite": me as Pedro, Mary as Deb, Cherie as Napoleon and Leah as Kip.

And now, this weirdest of holidays has come full circle for me, as our culture and my love for adorable things mandates that I dress my only child in a costume. Last year was Lucy’s first Halloween, and the selection of a first Halloween costume, like a first birthday and a first haircut and a first ceremonious urination in a toilet, is to be preserved, with much pomp, in the annals of the baby book. The selection of the costume had to be perfect, aligning both with the pop-culture savvy of the demographic to which Anthony and I belong, and to the cuteness that Lucy naturally exudes. And what could be cooler, and cuter, than dressing a baby as one of a group of iconic ’80s villains: 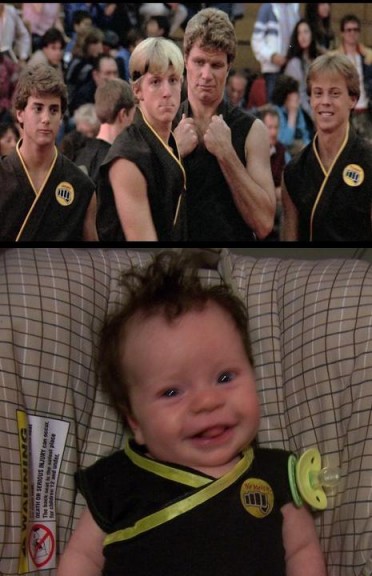 Our first family Halloween in Yellow Springs was quiet and pleasant. One of the annual village bonfires was practically at our doorstep, in front of the Union Schoolhouse. It was a chilly evening, and we were thus obliged to fashion Lucy a second, weather-appropriate costume. 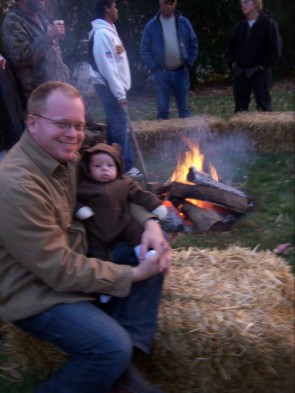 Papa bear and baby bear at the bonfire

It was a great night, sipping cider by the fire and meeting new people. One of the ladies there told me why this particular spot was one of the original bonfire locations: the Union Schoolhouse was once the community center and police station, and since the police sponsored the bonfires, it was natural that there would be one close by.

One enduring memory of that night was hearing a fire truck pull up at the end of Union Street and blast its siren. As it did so, what can only be described as a gaggle of school children, in full Halloween regalia, burst across the open field at the corner of Stafford and Union Streets, ready to receive the gift of sweets from the firemen. They appeared out of the October evening fog, moving with one purpose.  How could I not imagine my own kid, at that time a mere two months old, someday scampering across the grass in pursuit of glass-and-needle-free treats? I can only hope that, when the time comes, I’ll be ready to fend off her doleful pleas as I tell her, “No, you can’t eat it all tonight,” and place the plastic bowl on top of the refrigerator.

As for this year, we have decided on a costume for Lucy. On the advice of a reader from my last blog, Anthony, Lucy and I recently visited the Johnny Appleseed Museum on the Urbana University campus. If you happen to know of the best way to fashion a toddler-sized papier-mâché pot, please: leave your suggestions in the comments section.

One Response to “BLOG – Happy Halloween, everybody”