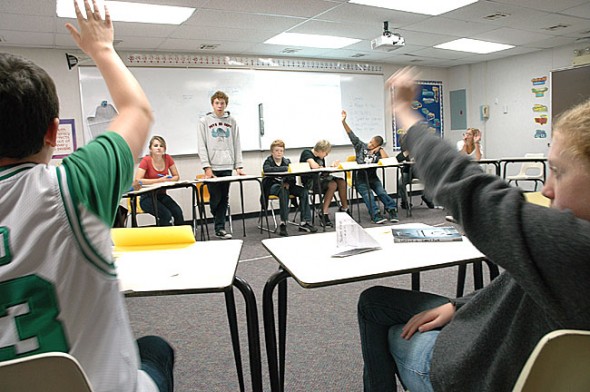 YSHS student facilitators Ben Green and Lucy Callahan, background, moderated a discussion for McKinney Middle School students on problem-solving school issues. The facilitators are part of an effort to train student leaders who can advocate for themselves and others to solve issues that youth find important. (Photo by Lauren Heaton)

On Tuesday morning, McKinney Middle School students were highly engaged in discussions about bullying in their school. Some students said that no one really bullies here because students all know and love each other, “like a family,” one said. Others believed that bullying happens a lot, sometimes in subtle ways. The students were thoughtful, respectful, and willing to disagree. The groups, which talked for hours, were moderated by a small but mighty bunch of Yellow Springs High School students who have been learning how to give voice to those who want it and to help students and adults share their views with each other.

Informally known as the Yellow Springs youth facilitators, a group of about 11 students has been attending workshops for the past two years to gain skills that allow them to be heard, and to help other youth cultivate their own voice too. They have facilitated discussions for adults and youth around controversial films at the Little Art, and helped to facilitate several leadership workshops with students at Mills Lawn. And on Tuesday, they facilitated part of a workshop at the high school and McKinney that has students crafting solutions to the problems, such as drug use, bullying, student governance, and having a voice in their education, that they have perceived and identified as issues in their own school. The facilitators volunteered for their role because they are committed to finding ways to increase understanding, acceptance and harmony among not only the school community but within the community at large.

Several of the high schoolers who sat down to an interview last week expressed what they perceived as a communication gap between youth and adults in the larger community, including Yellow Springs. The gap was illustrated by a community discussion that went “very badly” when students tried to moderate a forum on Prom Night in Mississippi last spring at the Little Art Theatre. Adults dominated the discussion, talking over kids, and pulling discussion away from topics the youth found most profound and relevant to them, the youth said.

“Adults were very rude and showed no respect for the kids at all,” facilitator Lydia Jewett said.

The example is representative of a general experience kids have growing up in society, according to local resident Don Wallis, who over the past five years has coordinated a series of listening sessions among local youth and published their discussions on topics of drugs, racism, self image, youth culture and local issues. During the over 20 sessions he has recorded, he has heard youth speak consistently about not feeling heard in the community. They express the pain of feeling “criticized and penalized for being kids,” Wallis said. Yet what they really want, he said, is to connect to the community in meaningful ways.

“They seek to connect to the larger community, and that may be something Yellow Springs doesn’t know about its youth,” Wallis said.

Village Human Relations Commission member Joan Chappelle heard something similar when her group sat down two years ago to consult with a group of youth over community concern about youth hanging out downtown. The young people requested two things: access to dialogue with adults, and access to the skills to facilitate that dialogue around issues that are important to them, she said. So the HRC made empowering youth one of its four chief goals and budgeted several thousand dollars to sponsor workshops and events to train youth on how to facilitate the kinds of discussions they wanted to have.

Meanwhile, longtime YSHS Principal John Gudgel, who retired last year but still works in the schools, had been holding school-wide “pulse” meetings at McKinney and YSHS to encourage students to express their opinions and discuss their own school culture. Along with the listening sessions Wallis continued to produce, the youth were already working up to a more formalized induction into roles of leadership.

The first workshops were led by Dana Patterson, former director of Antioch College’s Coretta Scott King Center and currently director of Wright State University’s Bolinga Black Cultural Resources Center. Patterson engaged groups of youth in several workshops modeled after the National Coalition Building Institute, which according to Chappelle, aims to build peace and community by addressing issues of difference. Some of the high school students who volunteered for the NCBI training also participated in another program through the National Conference for Community and Justice to help students at Mills Lawn to recognize bigotry and promote cross-cultural understanding.

In facilitator training, students are first asked to share their experience of self, and then acknowledge patterns of common experience among themselves, Chappelle said. They examine bias and its causes, and then are asked to utilize their broadened perspectives to represent their peers and promote the kind of change they want. Finally, participating students had the option of going one step further to facilitate dialogue for others — to help give others their own voice too. A core group of about 11 students accepted the role and exercised their newfound skills as discussion moderators during the school’s 2020 strategic plan film series last spring.

The results were mixed. Having the opportunity to lead the discussion — to decide who got to talk — was extremely empowering, said Lydia Jewett, who is a senior this year.

“It was us letting the adults talk, instead of the other way around,” she said. And the student facilitators used their authority to allow their peers to speak and to “let the community know that we are interested in the world around us,” and have opinions to share about it, she said.

But the discussion also got out of control, the students said. The film was about the first integrated prom at Charleston High School in Mississippi. And as the students began to share their views on the topic of racism especially, according to facilitator Maryah Martin, adults, both parents and teachers, began to assert their dominance by speaking beyond the time limit, talking over students and repeatedly changing the topic of conversation. And though designated as leaders, the facilitators felt overpowered and looked to their greatest support person for answers.

“We were like, Mr. Gudgel, what do we do?” facilitator Keturah Fulton recalled.

The community failed to understand that its youth have strong feelings about complicated issues and are very capable of expressing themselves, facilitator Liana Rothman said.

“People think teenagers are petty and egotistical, and that all we care about is ourselves, but a lot of kids do care about more than that,” Jewett said.

According to the surveys that students at McKinney and the high school took in the spring, the youth care about drugs in their schools, bullying and intimidation, racial self-segregation, and the kind of learning they are tasked to do every day. And in fact, they also care about helping others to voice what they care about, which is why they were excited to lead their peers in an exercise this week designed to help them craft solutions to the issues they believe need to change.

YSHS Principal Tim Krier supports the SPIRIT (Student Problem Identification & Resolution of Issues Together) workshop that occurred at the high school on Tuesday because it is the kind of exercise that helps youth to be active agents in solving their own issues. Yellow Springs has been innovative in its cultivation and implementation of communication programs that will allow its youth to lead their peers now and later when they’re adults and active citizens in their communities, he said. And he hopes to continue a youth empowerment series that will give students more opportunities to interact with adults around community issues.

“I’ve never heard of what John (Gudgel) and the HRC have started at the student level, with the film discussions led by kids and then continuing to develop their capacity to lead activities with the youth facilitators,” he said.

The local youth facilitators have embraced their role to the fullest degree, going a step beyond giving others a chance to speak, by encouraging their peers to actually cultivate their voices.

“We’re called the facilitators because we get people to talk,” facilitator Savita Bathija said last week.

Giving people space to come together and then giving them a platform to share their views, no matter how disparate they are, is the foundation for the healing and peacemaking endeavors people everywhere are in need of, Chappelle said.

The facilitators agreed that being heard and being allowed to lead is a powerful feeling, and one they want to share with others. Last year, a group led by YSHS senior Stephanie Scott visited the sixth grade girls at Mills Lawn to talk about self esteem and issues the younger girls wanted to talk about. The experience allowed the high schoolers to see that there was also a communication gap between themselves and their younger peers as well, Jewett said.

“It made us realize that we want to increase understanding between youth of all age groups — to close all the gaps between all age groups,” Martin said.

They believe that once other youth understand they have the power to demand an audience for their voice, they themselves will continue on as facilitators to help others discover theirs.

“It’s an amazing feeling to be heard,” Rothman said.