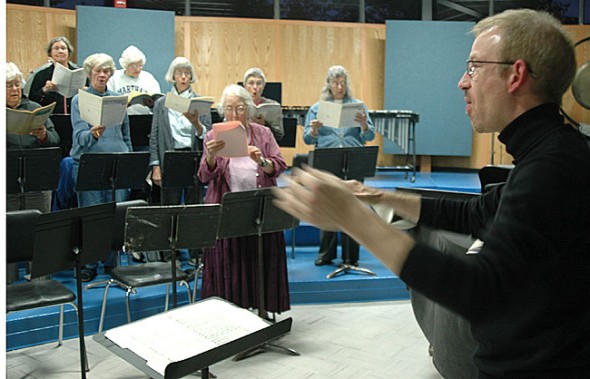 At a recent rehearsal, James Johnston led the Yellow Springs Community Chorus in “It Is An Illusion You Were Ever Free,” a piece that the chorus will premier with professional piano trio Triple Helix from Wellesley, Mass. on Saturday, Nov. 5. The Yellow Springs Chamber Orchestra will perform two Beethoven pieces with Triple Helix that evening. (Photo by Megan Bachman)

Three is the magic number for an upcoming collaborative concert of three ensembles. The local Chamber Orchestra and Community Chorus and a visiting piano trio, appropriately named Triple Helix, will perform three works over an evening, including Beethoven’s “Triple Concerto” and “Leonore Overture No. 3,” his third attempt to write an opera.

Triple Helix, which is scheduled to put on its own concert on Sunday, Nov. 6, as part of Chamber Music Yellow Springs’ series, was booked for Saturday’s unique collaboration of amateurs and professionals thanks to a grant from the Yellow Springs Community Foundation.

To offer more such events and increase support for the local ensembles, Yellow Springs Community Music, a new umbrella group for the local orchestra, chorus and band was just formed.

“Amateur players doing what they love to do and stretching is laudatory and worthy of support,” said James Johnston, who conducts all three local groups.

The well-known Beethoven “Leonore Overture” will feature the local orchestra playing with Triple Helix, while the world premiere of the soprano-alto-tenor-bass version of Yu-Hiu Chang’s “It Is An Illusion You Were Ever Free” brings the local chorus together with Triple Helix. The program concludes with Beethoven’s “Triple Concerto” for the visiting piano trio and the orchestra.

The pieces are challenging and the pressure is high to play well with professionals, according to Johnston, but the local groups are willing to step up.

“I usually hold the bar up there, and with a little work, people can get it,” Johnston said. “People are usually up for a challenge, which I can say is an aspect of people in this town.”

Yellow Springs Community Music will aid Johnston, who not only conducts the ensembles but organizes its concerts, duplicates music, raises money and more.

“The group is to help [Johnston] out because he can’t do it by himself,” orchestra member and YSCM board member Richard Simons said. “It’s to free up his time to focus on musical purposes.”

Other board members are Kelly Hall, Lauren Heaton, Susanne Oldham and Mary White.

In lieu of its own tax-exempt status, the group will use the Yellow Springs Arts Council as its fiscal agent to accept tax-deductible donations. The Yellow Springs Community Foundation granted $1,800 for Saturday’s concert to pay an honorarium to Triple Helix. Johnston hopes to raise more consistent funding for operating expenses and special events such as “Triplicty” and last spring’s production of “Orfeo ed Euridice.”

“The true meaning of community involvement plays out regularly in the groups,” Johnston said of the committed musicians and singers who rehearse weekly throughout the season.

Johnston has been drilling the chorus and orchestra in their parts over recent weeks to prepare for the concert. For the chorus, the modern work “Illusion” has been particularly challenging with its rhythmic difficulty and frequent dissonance, Johnston said, in addition to the fact that the singers have had to practice without the trio present.

The arrangement brings together the existential text of Wellesley poet Frank Bidart with music composed by Chang, a Taiwanese-American woman on the faculty at Brandeis University. Themes include death and dying, the meaning of life, personal choices and the nature of freedom.

Johnston said he hopes “Illusion” will prepare the chorus to sing more modern pieces over the coming months. Planned are a holiday concert featuring Benjamin Britten’s “St. Nicolas Cantata” and a musical theater piece in the spring, Gian Carlo Menotti’s “The Unicorn, the Gorgon and the Manticore.”

The orchestra has been rehearsing the two Beethoven pieces, including his “Leonore Overture,” a Napoleonic era story about the rescue of a wrongfully accused prisoner, that includes an off-stage horn part.

They’ve also been working on Beethoven’s “Triple Concerto”—a rare concerto for three soloists playing violin, cello and piano—and a “monument in musical literature,” according to Simon, himself a former professional musician and conductor.

“The piece is well known, famous and challenging,” Simons said. “It has probably never been performed in Yellow Springs or in the area.”

Simons, who taught music at Antioch College and Yellow Springs High School in the 1960s, moved back to town in 2007 and was pleased to see the local music scene as vibrant as ever. While he had not intended to join the orchestra, after attending a rehearsal he was inspired to participate.

“Everyone gives their best effort,” Simons said. “The enthusiasm and opportunity for people to make really good music is wonderful for a village like Yellow Springs.”

“Providing these opportunities to actually play or sing in a pretty good chorus is James Johnston,” Simons said. “We’re lucky to have him.”

Johnston is always looking for more musicians for the groups, which range from 20 to 40 musicians. There is a particular need for more strings for the orchestra and tenors and basses for the chorus, he said.