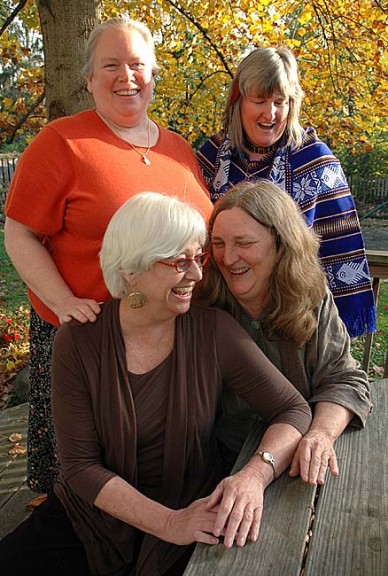 Organizers of the upcoming community singing event, “Singing from the Heart,” are, from left front, Denise Runyon and Theresa Horan-Sapunar, and from left back, Linda Griffith and Jannirose Fenimore. The event takes place next Saturday, Nov. 19, from 7–9:30 p.m. at Westminster Hall at the First Presbyterian Church. (Photo by Diane Chiddister)

Singing from, and for, the heart

Singing brings people together in a way that unites and enriches, according to the organizers of “Singing from the Heart,” a Yellow Springs Community Sing that takes place next weekend.

“Singing together connects us in an incredible way that’s so satisfying and rich and nourishing,” said Theresa Horan-Sapunar. “What we want to do is not really about musicality, but really about the heart and community.”

To Denise Runyon, “Singing is fun, uplifting and healing. Sound has a power, a living energy — when we’re singing together, something is happening.”

The two women, along with Jannirose Fenimore and Linda Griffith, have organized the local event that takes place Saturday, Nov. 19, from 7–9:30 p.m. at Westminster Hall at the First Presbyterian Church. While organizers suggest a donation of $10–20, they say that no one will be turned away.

All four women take part in the Threshold Singers, the local chapter of a national movement called the Threshold Choir, composed of groups of women who “sing at the bedsides of people who are struggling, some with living, some with dying,” according to the Threshold Choir Web site. The choir is a fulfilling experience, all said, but they also wanted to do something more inclusive, and hope that both men and women not part of the Threshold group come to the upcoming event.

For Horan-Sapunar, one inspiration has been trips to Germany, where singers have begun a movement to hold biannual events called “A Night of Spirtual Singing” in villages, towns and cities. A longtime leader of singing events, she was invited to lead one in Germany, which hundreds of people attended.

Unlike most singing events, the upcoming community sing will not focus on a certain kind of song, such as Christmas carols, nor rely on shared memory. Rather, participants will be taught new songs, which are “simple ones, easy to learn,” said Horan-Sapunar, one of the two song leaders for the event. The songs focus on love and gratitude, and are sung a cappella.

“I’ve been leading singing events for 35 years, and I’ll be bringing my current favorites, the ones that sing to me,” she said.

The second song leader will be Shelley Graff of Cincinnati.

The idea for the upcoming event initially came from Runyon, who said, “My heart kept telling me to do this. I had a growing sense this would be important to the community.”

Times are hard for many people, she believes, and singing seems a way to lift spirits.

To Fenimore, singing is a way to heal divisions in a community.

“It gives us an invitation to be on the same wavelength,” she said.

“People can come and hum along if they want,” said Horan-Sapunar. “Or they can just listen.”

One Response to “Singing from, and for, the heart”