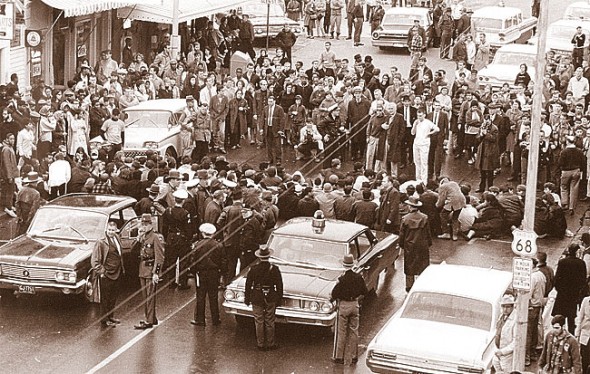 Hundreds of local and area students, residents and law enforcement officials jammed downtown Yellow Springs on Xenia Avenue during a chaotic March 1964 demonstration against Lewis Gegner for refusing to cut the hair of black people at his barbershop. Fifty years ago this month, African-American resident Paul Graham began a legal case against Gegner that reached the Ohio Supreme Court. (Photo courtesy of Scott Sanders, Antiochiana)

A civil rights milestone, 50 years on

Fifty years ago this month, African-American villager Paul Graham walked into Lewis Gegner’s barbershop on Xenia Avenue, sat down in his barber chair and asked for a haircut.

“I can’t cut your hair,” the white barbershop owner replied, according to Graham’s account. “I don’t know how. That’s all there is to it.”

That day Graham filed a complaint against Gegner’s discriminatory practices with the Ohio Civil Rights Commission in a case that reached the Ohio Supreme Court.

The historic moment was part of a 20-year effort to desegregate Yellow Springs, which escalated to the dramatic 1964 confrontation between police and protesters picketing Gegner’s shop  —  an event that landed 100 people in jail and thrust Yellow Springs into the national spotlight during the height of the civil rights movement.

Soon after the confrontation, Gegner sold his shop and moved out of town, and the Supreme Court refused to hear Graham’s case. Gegner had never consented to cut a black man’s hair when pressured.

Today, the villagers and Antioch College students who participated in the Gegner actions look back on the incident with a mixture of pride and disappointment, and draw lessons from a struggle which both defined and divided the -community.

Segregation in a tolerant town

Though Yellow Springs had the reputation as an open and welcoming community, it was really a microcosm of the segregated U.S. at the time, said Graham, now 82. In the 1940s, the Little Theatre, now the Little Art Theatre, forced black patrons to sit behind a rope in the back of the theater; the Glen Café and Ye Olde Trail Tavern refused to serve African Americans; and none of the village’s three barbershops would cut a black person’s hair.

“It became apparent that Yellow Springs wasn’t the type of community we thought it was,” Graham said.

Over the next 20 years, a local citizens group, the Yellow Springs Committee for Fair Practices (YSCFP), successfully pressured most local businesses to accept black patrons through boycotts, picketing, civil disobedience, court action and the passing of an anti-discrimination ordinance. Gegner was the lone holdout and soon became the focal point of a decade-long desegregation campaign by the YSCFP in addition to the Antioch Committee for Racial Equality and the Antioch College chapter of the NAACP.

To then-Antioch student Prexy Nesbitt, discrimination taking place in a Northern town that considered itself tolerant was an added motivation to activists.

“The whole Gegner incident served as a reminder…that you could look right around the corner and find manifestations of the same bigotry and close-mindedness as in the South,” Nesbitt said, adding that this was a “particular affront” that fueled local activists.

The YSCFP organized picketing at Gegner’s shop on Saturday mornings with two to three people at a time in a public display that became as much a part of the downtown scene as the weekly peace protest on Xenia Avenue is now, Graham said.

In 1961, the YSCFP selected Graham to be the test case for a complaint the group planned to file to the newly-formed Ohio Civil Rights Commission. He was accompanied by Hardy Trolander, a YSCFP member who was also a co-founder of Yellow Springs Instruments. At the time, Graham was a chemist for Vernay Laboratories, having graduated from Antioch in 1952.

“I just figured that something had to be done,” Graham said. “I thought it was just filing a complaint. I didn’t realize it could become a full-time job.”

After the Ohio Civil Rights Commission ordered Gegner to stop his discriminatory practices, Gegner filed an appeal to the Greene County Court of Appeals and won. Graham then won the appeal at the district level, sending the case to the Ohio Supreme Court. It was the first time Ohio’s public accommodations law had been challenged since it was passed in 1878, Trolander said.

But many Antioch student activists felt that the legal route was too slow and urged an escalation of direct action at Gegner’s shop, according to Graham. They began acts of civil disobedience, sitting in the shop and refusing to leave.

One student was Nesbitt, who went to Gegner’s shop, sat in his barber’s chair and asked for a haircut. Gegner draped an apron over his face and Nesbitt stayed there for 30 to 40 minutes before he was arrested by then Police Chief Jim McKee.

Antioch students also started picketing additional days of the week and increased the number of picketers, causing a reaction from Gegner and a group of downtown merchants.

“We were uptight but controlled,” Trolander said of the YSCFP. “The [Antioch] students got involved and took over with a bit more of a heavy hand.”

Gegner and the downtown merchants, claiming that the protests were hurting business, won an injunction at the Greene County Court that limited protestors to no more than three at a time. To continue picketing in large numbers, the activists would have to disobey the law.

“There was a good bit of feeling among students that townspeople were not moving fast enough,” Graham said. “They felt that the lawsuit wasn’t going to get anything done, that the only way was to do direct action.”

Graham recalls participating in discussions at Antioch until midnight to try to convince students of the advantages of the legal course. But the students were “impatient,” he said.

The day after the injunction was granted, students planned a large demonstration in front of Gegner’s shop for Saturday, March 14, 1964, in defiance of the court’s order and the Antioch College administration, which said it would suspend any participating student.

The Antioch student protesters, who were joined by villagers and other students from Central State and Wilberforce, walked downtown, sat in the middle of Xenia Avenue and linked their arms. Outside police forces were called in and chaos ensued as the approximately 150 police officers turned fire hoses and tear gas upon the protesters while villagers watched in shock.

News of the event, which was labeled a “riot,” went national. Gegner never re-opened his barbershop and the Ohio Supreme Court refused to hear the case without a defendant.

Graham was disappointed that after years of work, his case would not be heard in the state’s highest court. And after the highly-publicized confrontation, Graham began to receive threatening letters and phone calls, some from as far away as Mississippi and Alabama.

Trolander too was frustrated but realized that the confrontation was inevitable.

“Everything was leading toward that incident,” Trolander said. “The only way for that to be avoided was if Gegner changed his mind. It reached a point of no return — there were too many people involved and committed.”

As it turned out, the federal Civil Rights Act of 1964 was passed later that year, outlawing all forms of racial discrimination in the U.S.

According to Nesbitt, even though Gegner never consented to cutting a black person’s hair, it was a “moral victory” that he closed his shop. The escalation itself proved that the protesters made an impact and gave Yellow Springs a lasting reputation.

“I think that when we get this escalation it means that you’re having an effect,” Nesbitt said. “When the forces of repression are very worried and want to stop it, I think that’s a point where we say that we’ve made a dent. In the case of Yellow Springs and the barbershop, it sent a message to all of southern Ohio that Yellow Springs stood for something.”

Former village resident Bomani Moyenda, just a third grader at the time, watched the police tear gas protesters from the sidewalk with his mother and sister. The incident had a lasting personal effect on him.

“It was important for people in the village to take a stand against something that was overtly racist,” Moyenda said. “It meant a lot for me to see townspeople standing up against what they perceived was racial injustice.”

Whether or not the Gegner incident was a victory, those who played a part agreed that more work still needs to be done. Though the incident made it clear that Yellow Springs will not tolerate blatant racism, discrimination is likely still present in how police and schools treat people of color, said Nesbitt, who spent decades fighting racism in Africa and around the world.

Moyenda said a racial achievement gap at the schools needs to be addressed, and greater efforts made to stem the decades-long decline of the local black population, which fell from one-quarter of the village in 1970 to just 12 percent in 2010.

Graham said he agrees that more could be done to increase diversity in the village. He believes the decline in diversity has diminished the lives of villagers, even though much of the decline was out of the village’s control.

“We’re not making a special effort at diversification, it’s just not on the radar,” he said, adding that increasing African-American participation in civic affairs would be a good first step.

Today, villagers may be challenging other perceived injustices, Trolander said. Evidence that the activist spirit is still alive in the village can be seen in the fight to stop the controversial shale gas drilling technique known as fracking and around other environmental and energy issues, he said. The local civil rights actions may have more of an impact on the nation than on Yellow Springs, Trolander added.

Local historian Scott Sanders of Anti-ochiana said he believes the Gegner barbershop incident may be the most significant event in Yellow Springs history.

“The entire event is bigger than anyone thinks and remembers,” Sanders said. Because it garnered national media attention, involved both Antioch and the town and took place over a decade, it may be more significant than the Miami Deposit bank robbery, downtown fires, railroad construction or Antioch College strikes.

“Few events have been so important,” Sanders said.

One Response to “A civil rights milestone, 50 years on”