When I was nine years old, my dad gave me my first computer for Christmas. This was in the days before Windows was standard on PCs, and so when it booted up in DOS, there beside the tree that morning, it waited for my dad to give it a command. He typed in a few unintelligible letter combinations, and a program started up. There on the screen, the pixellated figure of a deer strode across a moonlit field, the ground of which was being covered by the falling snow, then faded into the image of a warm, festive-looking room, with a fireplace ablaze. A midi version of “O, Tannenbaum” was playing, and over this tranquil scene, the words “Merry Christmas” scrolled, followed by the words “And now, a message from Santa.” The music stopped, and I heard a familiar voice: “Ho ho ho, merry Christmas!

I turned to my dad, clueless of the amount of time it must have taken him to have put together such an elaborate presentation. “That wasn’t the real Santa talking,” I said, with ultimate snottiness. “That was a clip from Rudolph. Does this thing come with Sound Blaster?” 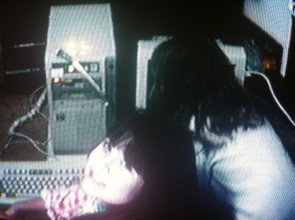 I can recount the scene mentioned above with such fidelity because I have it on tape; here I am, Christmas 1993, with my sister, Hayley, minutes after receiving my first computer.

As of this post, my daughter Lucy is now 16 months and two days old, and in those 16 months and two days, she has mastered several skills, and the best of these seems to be destruction. For example, she has removed at least seven tiles from the flooring in one of our bathrooms. She ruined a wayward copy of Harry Potter and the Half-Blood Prince. Anthony tells me that, a few days ago, she somehow managed to procure from a trash can one of her dirty diapers, which she ripped apart, proceeding to walk around the house with handfuls of her own poop. This poop, by the way, she managed to spread over the DVD remote control, which she had taken because she was unable to use the buttons on the DVD player itself, now that we have covered them in duct tape, much as we have covered the buttons on the TV, the VCR and every electrical outlet.

But what does this have to do with Christmas, you ask?

Well, for one thing, it has a lot to do with the things that come along with this ubiquitous holiday. In our fear that our child would inevitably wrap strings of colored lights around her neck or pierce her own ears with ornament hooks, we decided to do this with our Christmas tree: 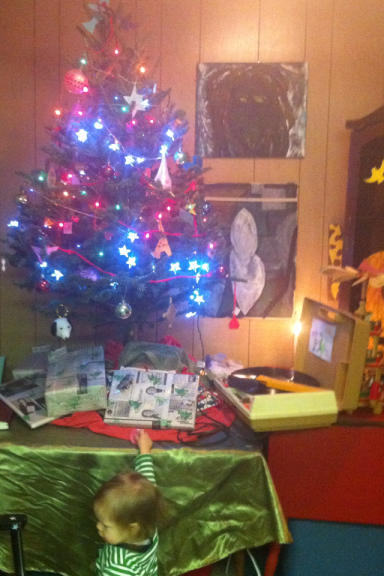 Caught in the act; notice that we also had to put the record player up there, for similar reasons. Also note that we love the News so much, we decided to wrap our presents in it.

Likewise, in the event that we might like to wrap a present without having it snatched out from under us and ripped apart while we watch, we must wait to do so until Lucy is asleep, praying as we do so that the crinkle of paper does not awaken her.

Really, our daughter’s capacity for destroying everything that she sees just means that she is beginning to transform from a blob of protoplasm into a little personality. To make another vague Harry Potter reference: she’s like a little wizard, just discovering she has all this power, and not quite being able to control it, and not really wanting to. She knows now what it means to dislike a food, and knows that the best way to exhibit that feeling is to throw the food on the floor. She also knows what it’s like to enjoy a hug, and that the best way to get that is to give one. She has opinions.

But again, what does this have to do with Christmas?

What it means is that my kid is developing consciousness. At this age, the cultural significance of the holiday has yet to impact her at all; the only thing I’m giving my kid this year is a hat I’m knitting her, provided she lets me finish it without grabbing a knitting needle and stabbing me with it. I’m guessing that by next year, she will have caught on. She will have heard of Santa somewhere, I’m sure, and despite our best efforts, she will probably know all about presents. After two whole years of getting stuff from friends and family members, she’s gonna look at me with the sass that she’s already developing, and that look is going to say, “Mom, a hat just ain’t gonna cut it.”

That look is going to kill me. It will be her ultimate act of destruction.

This holiday, my wish, vain though it may be, is that my kid will always look at me the way she (mostly) does now: like I’m the one that makes the magic happen. She might not like the food I feed her, but as far as she’s concerned, I craft those frozen peas with my own two hands, and those hands also bless her with her beloved crackers, which are her favorite food. In Lucy’s eyes, Anthony and I are veritable demigods who, though we sometimes have to take the poop-covered remote control from her, are always benevolent and loving and basically the coolest. 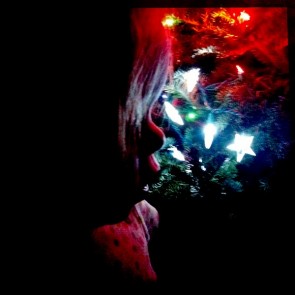 "Mom, this means nothing to me."

I can never apologize to my parents for all the household items I destroyed over the years. More importantly, I can’t really say how sorry I am for all the sassy looks, and even sassier words, with which I have presented them. And which, if I’m honest, I continue to present.

All I can really do is let them know, that I know, that one day I will do my penance; one day, my kid will be looking at me on Christmas and saying, “That’s not the real Santa talking, Mom. That’s just a clip from the 4-D movie experience, Rudolph 2020: Rudolph Resurrected. Does this thing come with teleportation?”