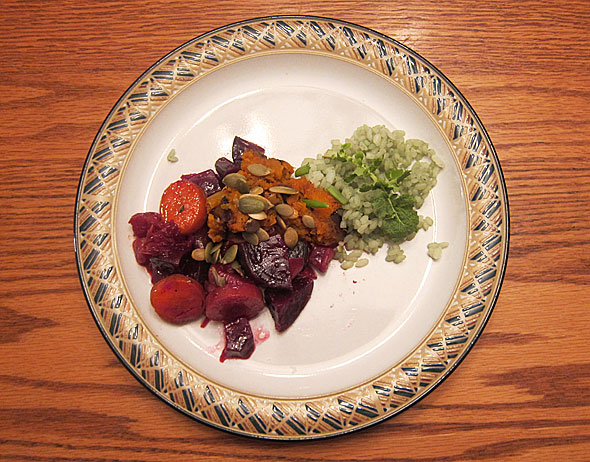 Often at sundown, my stepfather—a professional videographer—would drive us through the foothills of Tioga County, New York to one of its many overlooks to witness nature’s chromatic display. He was keen to record sunsets and, until recently, I didn’t understand his fascination. My moment of solidarity came slicing into a ripe beet. I literally gasped as the knife revealed the vivid red flesh, variegated like a onion; its intense inner beauty made me yearn for yet another. 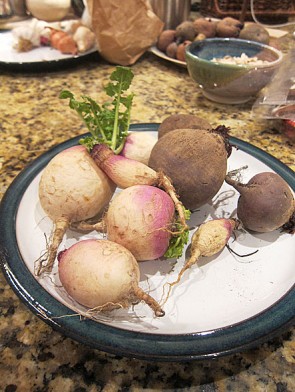 This fine vegetable was from Patchwork Gardens and one I was preparing for New Years Eve dinner. That morning, my husband had accepted a challenge from two close friends, and we had 6 hours from word go to prepare a New Years Eve party for 6 adults and 7 children. The main dish had to be simple but sizable and, so, roasted chicken it was.

I had returned from the farmers market with vegetables, pretzels, and nuts, from the Winds WIne Cellar with cheese and olives, and from Current Cuisine with two 4-pound chickens. Before moving to Yellow Springs, I never considered roasting a whole chicken. However, this community boasts wonderful sources of fresh chicken—New Liberty Farms, Ed Hill, and Dale Filburn—and I have gotten decidedly into the habit. My first recommendation is to get a meat thermometer; my second is to check out a video or two on prepping a chicken. Initially, I joined Julia Child’s school of cooking but soon played hooky from trussing the bird on the encouragement of Molly Ringwald. My latest inspiration came from a video on roasted duck. After a bit of experimenting, I now use a 450 degree oven and turn the bird breast down to sear the skin and trap juice in its white meat. 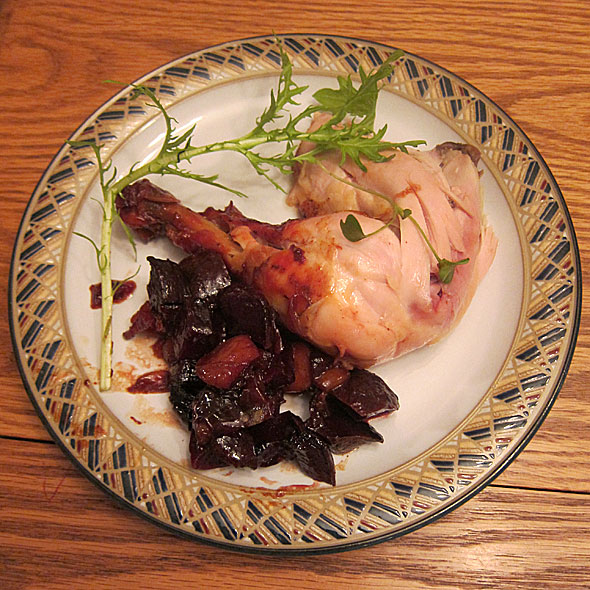 Preheat the oven to 450 degrees. Prepare the chicken by rinsing the bird including its cavity. Salt and pepper its surface inside and out. Place a bouquet of herbs in the cavity along with the orange slices, cloves, and some onion. Place the stuffed bird in a dutch oven or roasting pan breast down, tail up. Cube the remaining vegetables to a uniform size and surround the chicken with them. Pour the grape juice over the vegetables and splash the bird with sherry. Cook until the chicken’s internal temperature reaches 180 degrees. Remove from oven and let the bird rest at least 10 minutes before carving.

The beets and the sherry turn this dish a brilliant red. The vegetable medley itself is rich enough for a meal, and I plated mine with bamboo rice (It’s green!) from the Winds Wine Cellar, pureed squash from Peach Mountain, and pumpkin seeds from Starflower Natural Foods. It is a plate animated with nature’s array and my camera, like my stepfather’s, tries to capture its glory. 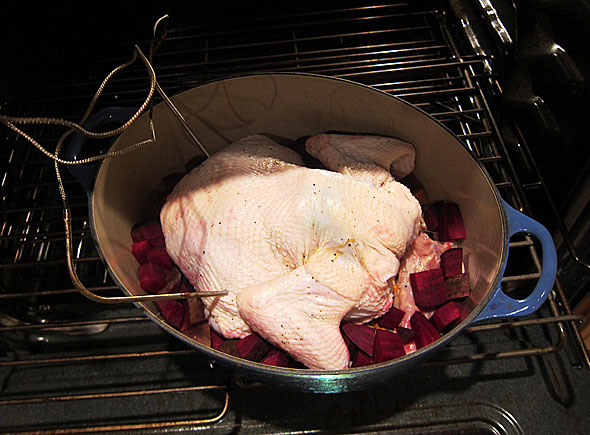 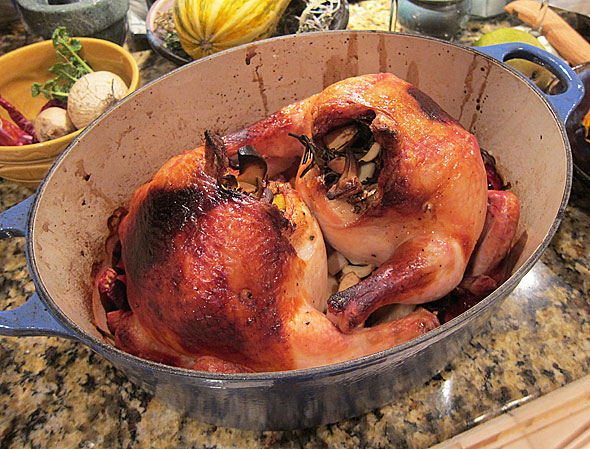