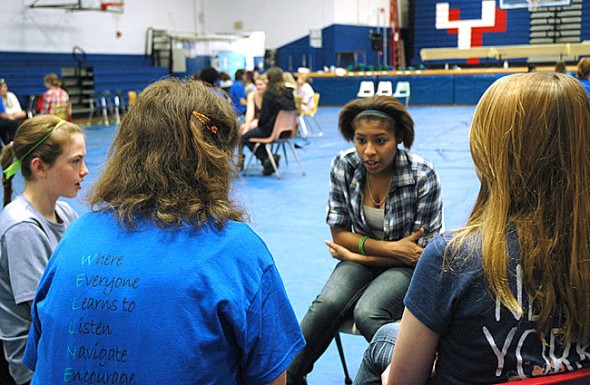 Students at McKinney Middle School are experiencing a “Wellness Week” this week at the school, focused on learning healthy behaviors along with becoming aware of the warning signs for troubled peers.

On Monday, the week began with the Re-Do Day Challenge, a character education program from the Violence Free Coalition. McKinney teachers Sarah Lowe and Elizabeth Gilbert, along with counselor Linda Sikes, earlier this year visited a school in Lebanon, Ohio, that was offering its students the program, and came away determined to bring it to McKinney, according to Lowe. The anti-bullying program focuses on topics such as attitude, respect, anger management, and stereotypes, using role playing and small group discussions as well as presentations. Pictured above are McKinney students taking part in Monday’s program.

Bullying is a problem at the school, as it is at all schools, Lowe said in a recent interview. While bullying may not be on the rise compared to past years, young people now have new arenas for bullying with the increased use of social networking, she said.

For the rest of the week, the students will see films and engage in dialogue around the issues of gender stereotypes, along with suicide prevention training.
See the March 29 Yellow Springs News for a longer article.