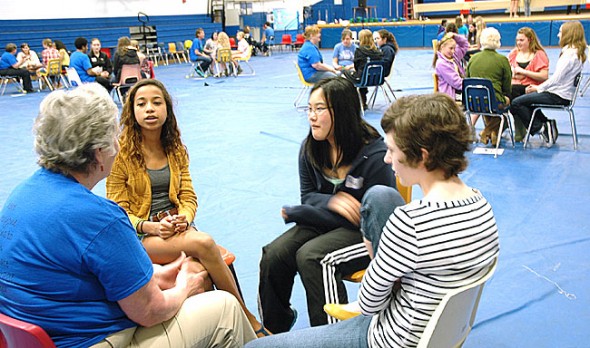 McKinney Middle School students are shown last Monday during small group discussions that were part of Re-Do Day, an anti-bullying program. All students took part in the activity, which was part of a weeklong McKinney Wellness Week. The week also included presentations on male and female body image and suicide prevention. (photos Megan Bachman)

Bullying is a problem everywhere in schools today, according to longtime ­McKinney Middle School teacher Sarah Lowe, and Yellow Springs is no exception. The prevalence of social networking media in particular offers a new, virtual venue for what once took place only in classrooms and schoolyards.

“Bullying is intensified with social networking,” Lowe said in a recent interview. “Sometimes we’re drawn into it even if it happens after school. If kids are cyberbullied at home, they won’t leave it there.”

Along with new venues for bullying, students today must also confront pervasive media images of violence and sexuality that make growing up even more difficult than it once was. While boys have their own challenges, girls must deal with the media’s constant sexualizing of young females.

“I think they’re bombarded,” Lowe said of female students. “It’s really difficult to be a girl today. It’s hard to be a guy too, but there’s so much negativity for girls.”

To address what they see as the critical challenges facing middle school students today, Lowe and fellow teacher Elizabeth Simon, along with guidance counselor Linda Sikes, organized the first ever McKinney Wellness Week for all students. The event took place throughout the week of March 19–23, and offered a variety of activites.

On Monday, all students took part in a daylong program called Re-Do Day, an anti-bullying program presented by Pete Bryant from Change Point in Cincinnati. This event, which the three McKinney teachers had experienced earlier this year when they took a professional day to visit Lebanon schools, sparked the idea for the Wellness Week, according to Lowe. The event, which includes small group discussions and role-playing, aims to “create a safe, fun and transparent environment” for students with a focus on attitude, respect, anger management, stereotypes, authenticity and affirmation, according to a Re-Do brochure.

Throughout the rest of the week, students heard presentations and had discussions about other aspects of being young people in today’s world. Cherie Dixon from the Greene County Family Violence Prevention program gave a program on dating and family violence, while all girls took part in a three-day program, “Uniquely Me,” focusing on female body image. When the girls were occupied, the boys met with former YSHS Principal John Gudgel and Mr. Neal of Daybreak of Dayton to discuss issues unique to young men. On Thursday, all students walked to Antioch University Midwest to view “Killing Us Softly,” a documentary about advertising and the female body image.

On Friday of last week, all students took part in a suicide prevention program with Project Brite Star of Beavercreek. Young people need to be aware of how to address the signs of potential suicide, and feel empowered to alert adults about possible problems with themselves or others, Lowe said.

“We want to make sure they have these tools,” she said of the students.

Increased awareness of these challenges affecting young people is a good thing, Lowe believes, but she believes that even with more awareness, growing up now is a challenge.

“I see girls struggling even more than they used to,” she said.

Lowe is especially pleased to have initiated an annual wellness event before she retires at the end of next year. She’s been teaching in Yellow Springs 34 years, and graduated from high school here in 1973. Because of financial shortfalls in the school budget, the McKinney teachers had to themselves find the funding for the event, which cost about $2,600 for the week. She received donations from the Greene County Prosecutors Office, the Student Council and the local police department to help fund the event.