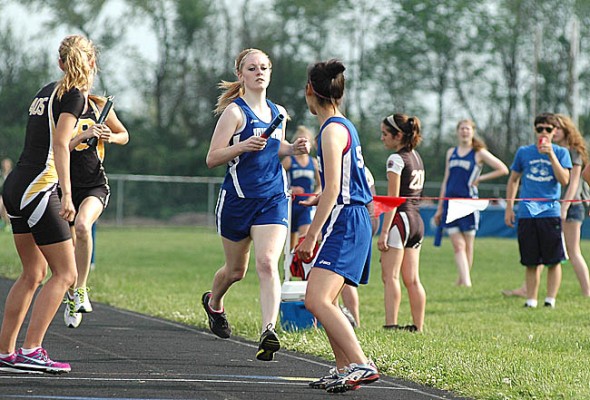 The Yellow Springs High School girls 4×800-meter relay proved at their home track last week that lighting can strike twice, delivering a lightning-fast first-place run before lightning from the sky ultimately caused the Bulldog Invitational to be canceled.

Antone Truss ended up with a share of first in the boys high jump (6´0˝), since that event was halted midway through. He also came in second in the long jump (19´08˝).

Earlier in the week, the meet at Shawnee was also cancelled because of inclement weather. Truss, nevertheless, came away with a second-place finish in the long jump.

The YSHS softball team pounded out 12 hits and scored six runs at Belmont last week but it wasn’t enough as they lost 26–6.

Every starter but one got a hit during the game, according to Coach Jimmy DeLong.

“Our hitters were getting their swings today,” Coach DeLong said. Though the Bulldogs outhit their opponents 12–8, the YSHS pitchers struggled with control, leading to walks that ultimately scored runs, DeLong said.

The Bulldogs defense turned a double play in the third inning when Worsham came racing in to snare a popup. She completed the double play by quickly tossing the ball to shortstop Holmes.

“Worsham made an outstanding play to get to the ball and then my shortstop Leanne Holmes alertly covered the bag at second to double off the runner,” Coach DeLong said of the play. Holmes further displayed her defensive skills when the next batter hit a hard groundball that deflected off the pitchers glove and Holmes changed direction to glove it. She then fired a bullet to first base to nip the runner and end the inning.

“Holmes is one of the top shortstops in the league this year and she proved it on that play,” Coach DeLong said.

At their home meet, the McKinney Invitational, the boys took the runner-up trophy while the girls placed fifth.

The McKinney pole vaulters dominated the competition. Kaliyah Fulton won the girls competition (4´0˝) and the boys doubled up with Oluka Okia winning with a jump of 7´6˝ ahead of second-place jumper Gabe Trilliana (5´6˝).

Joe Plumer proved he is the backbone the team in field events, winning the discus competition with a toss of 97´04˝ and placing second in the shot put with a throw of 32´ 5.75˝. Dee Johnson has continued to improve over the season, placing fifth in the discus with a throw of 68´03˝.

Another highlight of the evening was the boys high jump where Kaner Butler and Oluka Okia tied for second place with jumps of 5 feet.

A dramatic second-place run by the 4×400-meter squad of Cameron Haught, Levi Brown, Hayden Orme and Johnson (in 4:29.77) secured the runner up trophy for the team.