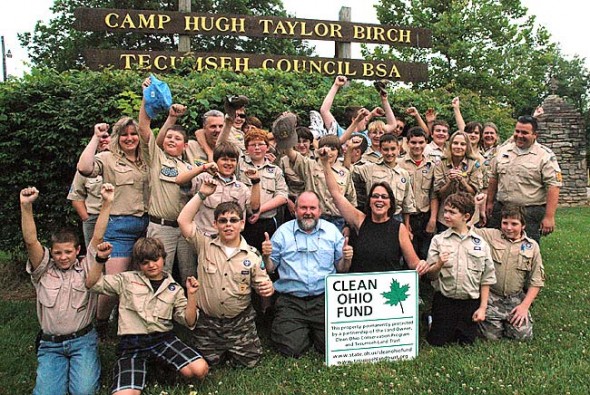 Boy Scouts at Camp Birch cheered at the news that Clean Ohio finally received funding for its open space and agricultural easement purchase programs. Last year Camp Birch used more than $600,000 from the statewide program to permanently protect the farms and wetlands at the 400-acre, 80-year-old camp. Pictured is Springfield Troop #311, along with, front center, Don Hollister of Ohio League of Conservation Voters and Krista Magaw of Tecumseh Land Trust.

Thanks to the tireless efforts of Krista Magaw of the Tecumseh Land Trust, Don Hollister of Ohio League of Conservation Voters and several other environmental groups, Clean Ohio’s open space and agricultural easement purchase programs are once again fully funded.

On Monday afternoon Governor John Kasich signed a mid-biennium review bill that contained $42 million dollars for Clean Ohio, program passed by voters in 2008. In recent years however, government authorization of bonds had ceased, keeping the local land trust and other organizations from accessing the money to preserve land. 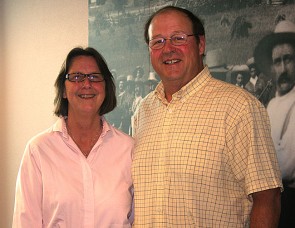 To date, Tecumseh Land Trust has protected 9,029 acres of prime farmland in Clark and Greene Counties through the Agricultural Easement Purchase Program of Clean Ohio and an additional 2,618 acres of land traversed by streams,rivers, and wetlands through Clean Ohio’s Open Space program. The land trust has received a total of $11 million from the program since 2008.

“We are absolutely thrilled to have Clean Ohio funded again,” said  Magaw, executive director of Tecumseh Land Trust in a press release. “In this business, timing is everything and we never want to lose momentum among interested landowners. We are incredibly grateful to Senator Chris Widener for making certain the funds were included in this budget bill and to Governor Kasich for signing the bill.” 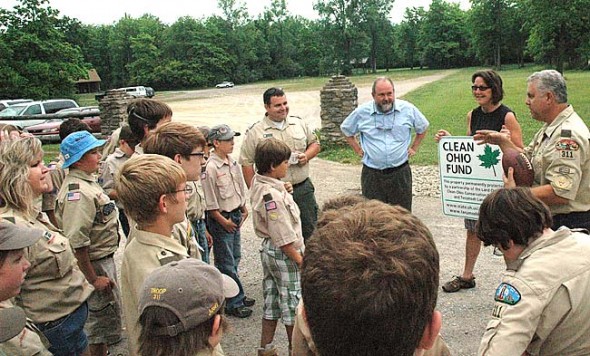