T-ball’s festival of love and play

“I enjoyed your article,” Elijah Yelton, one of the most fantastic four year olds in the whole world, says.

“You what?” I ask, stunned, not believing my ears. The boy is only four.

“I enjoyed your article,” he repeats, telling me his grandfather, Charlie Bunton, read it to him. “I am sorry we were late,” he adds. “We were eating dinner.”

“It’s okay to be late,” I say, repeating what parent coach Sally Lamping said to me, “it’s Yellow Springs time.”

“We just met a dog,” Caroline Tucker, 4, says. Her running-into-the-outfield partner Ayla Current, 5, nods. “His name is Bowser,” Ayla says. “Bowser,” Caroline repeats. “Will you put Bowser in the paper?” she asks.

“Who are you going to put in the paper?” Nathan Schindler, 7, asks, his eyes sparkling joyfully with hope.

“The beautiful Abigail Guthrie,” I say, whose t-shirt says “Oui, Oui, Oui.” “Or her handsome brother, Pete. Maybe even you, Nathan!”

David Reed, 4.95, and Aurora Liston, 5, have two balls each, the pair of them coming at me, their faces so lit up with pride and joy it is like a couple of lighthouses approaching. Kian Barker, 5, however, is distressed: “You’re only allowed to have one ball,” he says. I say, “Oh, no. In t-ball you can have two, three, five, a hundred balls!”

“My dad says you can only have one,” he says.

“Oh, well, we have to obey your dad,” I say, before he toddles over to his dad, Derek Barker, to renegotiate this deal.

“You want to use a smaller bat?” 3-year-old Kian Rainey’s mom Amy Boblitt asks him, her tone clearly communicating he probably should, that it would be easier for him to hit the ball if he had a smaller bat. The boy is standing at the tee, ignoring her entreaties, holding an old, old, wooden bat that is longer than he is tall, and probably half again as heavy as he is. When Kian ignores her, Amy switches tacks: “Let’s see what Jimmy thinks,” she says, tossing me this hot potato.

“You wanna smaller bat?” I stupidly ask. He ignores me now, staring straight ahead at the tee in front of him, that huge, heavy, old, old wooden bat dragging on the ground. I remember this is t-ball, where we give kids permission to decide some things for themselves, so I ask, “You wanna use that bat?” My brilliance astounds him. “Yes!” he exclaims, his face brightening so quickly it is like someone has just flicked a switch, ka-boom! Flooding the room with light.

“Okay,” I say, and Amy nods, smiling, resigned, willing to let it be what it will be. And then, by golly, in one mighty, nearly perfect, baseball-player swing, this beautiful, shining happy happy big-old-old-heavy-wooden-baseball-bat-wielding boy smacks that ball, sending it zinging into the infield grass. “Guess that was the right bat,” Amy says, laughing happily, proudly.

Geneva Gano’s our parent-coach on third, Scott Tucker’s on second again while the sparkling, spirited and peppy Lara Bauer is on first. Geneva’s third base turns into the Bermuda Triangle: kids run from first to second and disappear on the way to third, none of us knowing where they’ve gone. Though Geneva’s surrounded all night long by four, five, six kids: her daughter, the logical, deep-thinking Dorothy Paddison, 6, the dazzlingly handsome Mateo Basora, 3, the luminous and radiant Sierra Sundell-Turner, 22 months, who apparently read last week’s article where I mentioned she ran off the field with every one of the 47 ground balls she caught, because tonight she is dashing straight to me hit after hit, ground ball after ground ball, bringing me every one of the 512 balls she scoops up!

“I think I sent more runners home to you than you had at the plate,” Geneva says at the end of the night, proud, happy, she being marvelous and hanging in there right to the very end of a perfect night of t-ball.

And that’s our Perry League, Yellow Springs’ t-ball program for all our community’s children regardless of race, color, creed, national origin, sexual preference, ability, disability, or gender – a great festival of love and creativity, of joyous play and silliness, of goodness and grace abounding. And we’ll be out there at Gaunt Park for the next three Friday nights till our final night, August 3, the night of our wiener-roast potluck picnic, when we give every child who shows up a lovely little golden Perry League trophy. So come on out: you can begin play at any time, up to and including our very last night of play, and there is no requirement to play every week. We’d love to have you, we honestly and truly would. 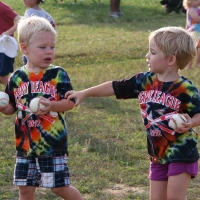 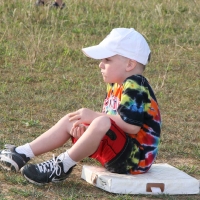 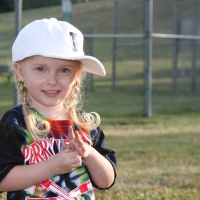 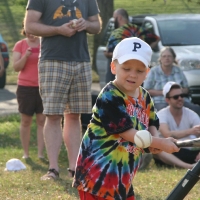 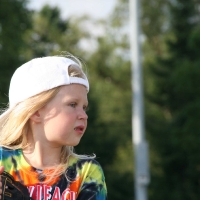 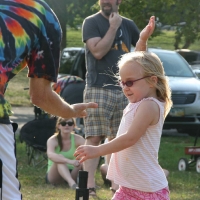 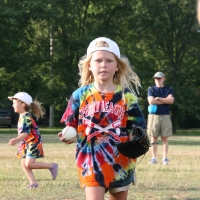 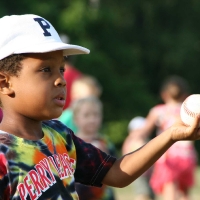 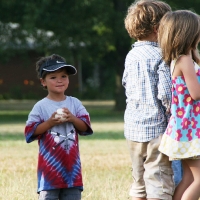 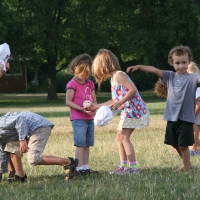 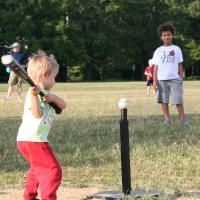 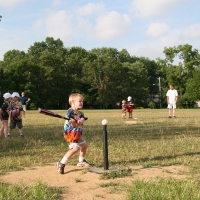 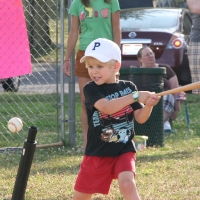 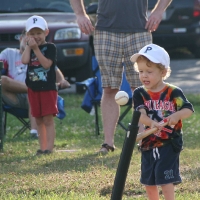 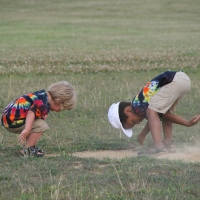