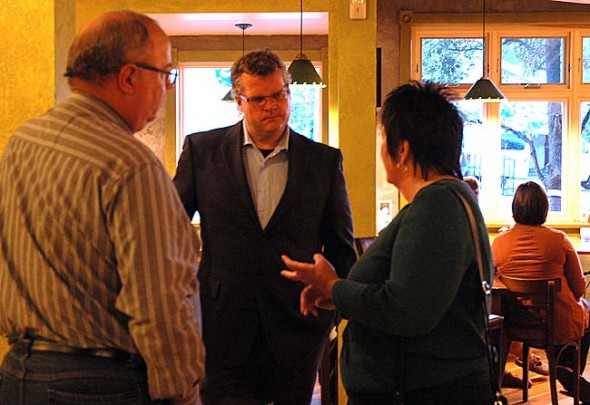 Yellow Springs resident and Democrat Jeff Robertson challenges incumbent Republican Chris Widener in the District 10 Ohio Senate race. Robertson is throwing a “pre-victory” party at the Glen Building on Oct. 19. Pictured is Robertson talking with villagers at The Winds after his book signing. (Photo by Megan Bachman)

Being a Yellow Springer, and a long shot, Democratic candidate Jeff Robertson’s run for the Ohio Senate — an ambitious undertaking in a Republican-leaning district — is anything but conventional. At a campaign fundraiser at The Winds Cafe this week, Robertson eschewed a tie, served an all-vegetarian meal, spent more time reading from his recently published political thriller than stumping, and seemed more interested in raising awareness than raising money.

With a grassroots campaign on a shoestring budget, the passionate first-time candidate wants to turn the political tide in Columbus. If elected, the 41-year-old Robertson would fight to bring back state support for local governments and schools, stand up for organized labor, public sector workers and collective bargaining rights and help strengthen the middle class. It’s an uphill battle, but one that he is more than willing to fight.

“I think it’s such an important election I want to help the [Democratic] party regardless of what happens,” Robertson said in an interview this week. “I want to motivate people to vote, and vote for everyone on the ticket.”

At a campaign “pre-victory” party from 6 to 9 p.m. on Friday, Oct. 19, at Glen Helen Building, Robertson invites all citizens to learn about his campaign and celebrate with music and food. And he’ll be signing books.

Robertson takes on Republican incumbent Chris Widener in District 10, a relatively new district that includes Greene, Clark and Madison counties. In Widener’s last election in 2008, the former three-term state representative defeated his Democratic opponent with 62 percent of the vote. Owing to conservative majorities in many of Ohio’s districts, this year Republicans run unopposed in five of the 17 statewide races. If Robertson hadn’t stepped in, voters in District 10 might not have had an option for state senator on Nov. 6.

That’s why Robertson, who has previously only worked campaigns and has never been a candidate, agreed to run when leaders of the Greene County Democratic Party prodded him. But he was also motivated to seek statewide office because of what he perceived as upsetting legislation coming from the overwhelmingly Republican state house. Two examples include Senate Bill 5, which sought to restrict collective bargaining rights for public workers until it was repealed by referendum last year, and a biennial budget that stripped local governments and schools of needed infrastructure money.

“When you start going after cops, teachers and firefighters, people should be upset,” Robertson said of Senate Bill 5. In fact, he helped circulate petitions for its repeal. As for the biennial budget, Robertson said that $27 million in taxpayer money was taken from public schools and local governments in District 10 alone. That’s money Robertson, if elected, would seek to restore.
“I’m not interested in raising taxes, I’m interested in spending the taxes you pay in a better way,” Robertson said. Widener played major roles in both pieces of legislation, Robertson said. He was the 17th and deciding vote for Senate Bill 5, which passed the chamber 17–16. And he championed the biennial budget as chairman of the Senate Finance Committee.

Robertson, a native of Wooster who has lived in the village for the majority of the last 14 years, has spent most of his career in education while always keeping one foot in politics. He was a teacher’s aide in special education at the Greene County Career Center, and a math and writing tutor at Yellow Springs High School before starting a private academic tutoring business for high school and college students.

As a volunteer, Robertson planted hundreds of native hardwoods as part of a tree-planting program he started for Green Environmental Coalition. And for three years he was the volunteer coordinator at the Glen Helen Nature Preserve. In politics, Robertson was the Greene County coordinator for Jennifer Brunner’s successful 2006 bid for secretary of state and a volunteer for the 2008 Obama campaign in Las Vegas.

Merging his love for writing and politics, Robertson self-published a work of fiction this summer, Buried Treasure, a satire about a mayoral election in a town like Yellow Springs, in which a hippie girl descended from the Shawnee takes on a corrupt Republican incumbent. The fun party town with an aging population, called Orange Spring and located in Gold County, is home to a liberal arts college named Azure. But Robertson, who has Choctaw ancestry, denies that the story in any way parallels his campaign.

Robertson has only a few thousand dollars in campaign funds, compared with Widener’s estimated war chest of a half million dollars. But he remains optimistic. And though he jokes that people say, “Why didn’t you run as an independent so you have a chance?” he believes he has a strong base of support in the traditionally Democratic city of Springfield and in Xenia.

“That’s my base,” Robertson said of the two largest cities in the district. “There are a lot of working people who have been shafted. Policemen, teachers are getting zero representation in Columbus.”

At the fundraiser, Robertson waxed nostalgic about the good old days when the U.S. economy and middle class was growing, thanks to high wages and manufacturing jobs.

Robertson also pledged to try to allocate more state money for K–12 education and colleges, since he believes education is critical to keeping more young people in the state. And though he doesn’t support a statewide ban on fracking, a controversial method of oil and gas drilling, he would seek to protect places like Glen Helen and improve drilling site inspection, since “there is a right and a wrong way to do things,” he said.

Yellow Springs resident Alban Holyoke, who attended the fundraiser, said he is voting for Robertson because of his support of working people and knowledge of the issues facing his district.

“It’s going to be tough because he’s so passionate and wants to make a positive change and politics are so ruthless,” Holyoke said. “But someone has to do it.”