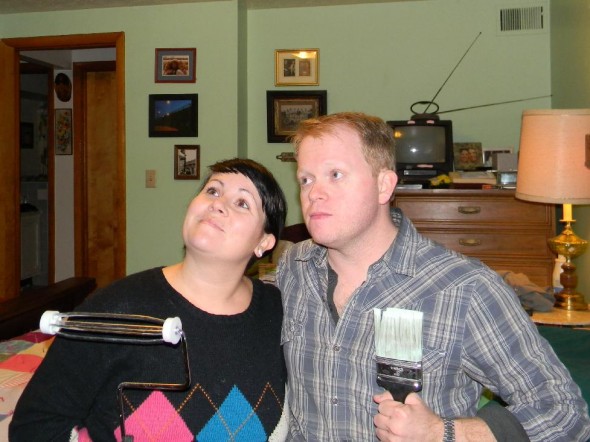 BLOG – A house of a different color

A few months ago, I came home from work to find a foot-sized hole in my bedroom wall. According to Anthony, he and our daughter, Lucy, were dancing around the room to The Who, when things got, as he puts it, “a little too rock and roll.” This, it seems, is to be all the explanation that I will ever receive on precisely what went down that day.

The hole in the wall stared me down after that, not only an eyesore, but another addition to the panoply of sites in our apartment where Lucy can hide stuff. This is one example of her insatiable energy, a major player in a list of reasons it took Anthony until last week to patch up the hole, at which point he declared we might as well go ahead and paint the whole room a new color. Odd as it may seem, I could follow this logic.

Technically, I like painting rooms. I like the idea of making your old, familiar surfaces at least vaguely interesting again. The act of actually painting, however, and all that is involved, is just about the worst: the endless bending over and then straining upward, the kneeling in cramped corners, the slick and sickly feeling on your toes when you accidentally step in the stuff, the fiery rage when you forget you stepped in it and walk across the carpet. Not for me. 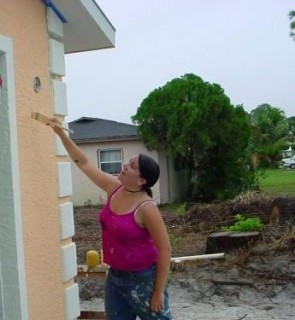 Sometimes we painted the outsides of houses, in colors that were very much NOT eggshell.

Six years ago, I was working in South Florida with Habitat for Humanity and Americorps, building houses. We must have painted the interiors of a few dozen houses, all the same shade of eggshell. We weren’t messin’ around: we lugged in five gallon buckets and knocked the job out in a few hours. I was never particularly good at it; for example, I never learned to avoid putting too much paint on the roller. Inevitably, I’d soak the thing, then lift it on its pole over my head and onto the high wall, where it would skid and then, eventually, rotate, sending little white drops down onto my head. I’m not exaggerating when I say that I had paint in my hair for about nine straight months.

Despite these details, it was one of the best parts in the process, a signal of good things to come. Painting was almost the last step on each house before a new homeowner would be able to move in. It meant that soon, a family would make this a home.

Walking through the hardware store, Anthony declared that he wanted a light green color, but definitely NOT anything in the “sea foam” family of shades. We searched through all the colors in the first display we ran across, holding up little cards and making generic, but important-sounding, remarks about a color needing “a little less blue” or “slightly more gray.” Eventually, we found the perfect shade.

Then we realized the brand we’d picked was about three times too expensive, and we picked something else.

The color we bought, like all paint colors, has a jazzy little name: “Sprite Twist,” it calls itself. Anthony sniffed at the moniker, and declared, “I don’t care for that.”

We started painting Monday night, while Lucy had a sleepover at her Mimi’s house. I was designated as the doer of the trim work. I chuckled to myself, thinking, “Heh, I got the easy job!” But this particular work necessitates much of the abhorred crouching and straining I mentioned before, with some balancing on chairs and bumping elbows thrown in for good measure.

The job took us two nights to finish. The end result?

Despite all this, I must conclude, for the sake of this blog having some sort of point, that the painting of a room is not just slapping some color on a wall. It requires a good deal of work, and as such, is a symbol of permanence. Anthony and I have lived in this apartment, in this town, together for three years and change now; this has been Lucy’s only place of residence thus far.

So, at least on some tacit level, painting our room is one way of acknowledging that we plan on being here for a while. Come what may, we have thrown in our lot with these sea foam walls.

If I didn’t want to stay here, I shouldn’t have bought paint with a 15-year guarantee (whatever that means), as I intend to see if “Sprite Twist” holds up.