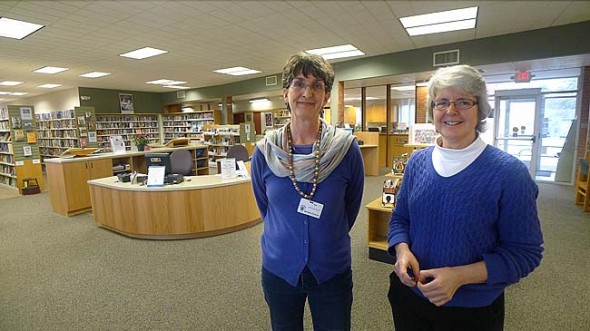 Librarians Ann Cooper, left, and Connie Collett helped design the new layout of the Yellow Springs Community Library, which recently underwent a major renovation. The more spacious lobby area seen behind them will promote better flow, while the new HVAC equipment, windows and doors may keep the 50-year-old building in good shape for another 50 years. (Photo by Megan Bachman)

Library turns over a new page

Patrons of the Yellow Springs Community Library have probably noticed a recent makeover which includes new carpeting and checkout stations as well as an expanded reference desk and rearranged book and DVD shelves. But it’s the least visible updates to the 50-year-old building — brand new heating and cooling equipment and new windows and doors — that are considered the most significant, and that will likely extend its life another 50 years.

Chipping in for the greatest portion of the nearly $300,000 remodel was the Village of Yellow Springs, which spent $205,000 for a new HVAC system, windows and doors. That money was earmarked in a facilities improvement fund from the 2006 property tax levy. In addition, Greene County Public Library spent $85,000 on new interior furnishings, carpet and a back office update, and the Yellow Springs Library Association is paying to reupholster chairs.

In fact, more was spent on this year’s renovation than to erect the Xenia Avenue building in 1965. And while circulation has quadrupled since then from 50,000 annual checkouts to more than 200,000 today, the building is still meeting the community’s needs, according to head librarian Connie Collett.

“This is a fantastic library building with the brick and marble and all the windows,” Collett said, adding that the half-century-old building “is still a great library in 2013, and with these changes is good for another 50 years.”

According to design architect and project consultant Ted Donnell, the structure is in great shape, but needed an overdue systems upgrade to extend its life and save energy. With its unique architecture, the investment is well worth it, he said.

“The building is in great shape structurally,” Donnell said. “It’s reaching that point where it is going to start becoming historical. It’s a gorgeous building architecturally.”

The Village, which owns the building and property, paid $16,500 in energy costs in 2011, and could soon realize a 30 to 40 percent annual energy savings thanks to the renovation, Donnell said.

Among the energy-efficiency upgrades: an antiquated boiler, which took up two rooms in the rear of the building, was replaced with five compact, 95-percent efficiency gas furnaces. A compressor “that sounded like a railroad engine,” according to Collett, was replaced with four air conditioning units, each with its own thermostat control. And the original single-pane windows and doors, whose seals were cracked and leaking, were replaced with new double-paned, low-E glass.

In the next few years both the original roof and the floor-to-ceiling windows on the building’s south façade need to be replaced, according to a building audit Donnell completed in 2011. The library is also eyeing a bathroom remodel and sustainable site improvements such as a parking lot island and rain gardens, he said. For now at least, the 8,200-square-foot building is sound.

Inside the library, patrons may find that there are more tables and plug-in spaces for computers (which are always in high demand), their favorite shelves have been moved, and the teen and preschool areas have been remodeled. The return slot, self-checkout stations and reference desk are now separated, promoting better flow in an area that was once cramped, according to librarian Ann Cooper.

“It feels more spacious,” Cooper said. “People seem more comfortable browsing displays and checking out because they’re not worried about getting out of the way. They are subtle changes, but it’s fresh — it feels clean.”

And printing from computers is now self-serve, whereas before a librarian had to assist. Because of that and the decreased activity around the reference desk, there is more time for librarians to help customers with reference questions or account issues.

“It’s better use of staff time,” Cooper said. “Most interactions at the desk are at a higher level now.”

Though patrons are reserving more materials from home and checking out digital copies, visits and circulation figures at the Yellow Springs library continue to rise and remain the highest per capita in the county, according to Collett. A brick-and-mortar library will be needed in the community for some time, she said.

“A lot of people don’t have technology at their house, some people are attached to books and people are definitely attached to each other,” she said. “I think there will always be a need for that.”

The Yellow Springs Library Association, founded in 1901, originally spearheaded plans for the building, which cost $225,000 in 1965 with $100,000 coming from the Vernay Foundation and the rest from community gifts and the Village. Prior to that the library was located on the corner of South Walnut Street and Short Street, where the Yellow Springs Board of Education offices are today.