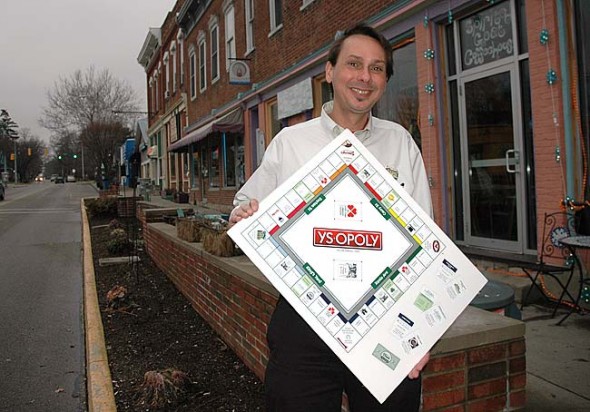 Brian Housh holds a copy of YS Opoly, a new Yellow Springs-based monopoly game, which is a fundraiser for the Yellow Springs Arts Council. Organizers are offering businesses and nonprofits who sponsor the game a featured place on the board. (Photo by Megan Bachman)

Go directly to the Jailhouse Suites. Do not pass go. Do not collect $200.

A local version of the 80-year-old fast-dealing property trading game of Monopoly is coming to Yellow Springs. If YS-Opoly becomes a reality, forget about Marvin Gardens and the B&O Railroad; you buy Current Cuisine and Antioch College. Press your luck with a chance card — “Yarn bomb a tree downtown, collect $100.” “Go sledding at Gaunt Park and hit the utility pole, pay $150 in medical expenses.” Or pick up a card from the community chest — “Donate $100 to the Widow’s Fund.” “Spend the day building a Home, Inc. house.”

Envisioned as a way to promote the town, its businesses, non-profits and quirky culture, an informal group of merchants and villagers designed a local Monopoly board game over the last few months. Next is to line up sponsors for board spaces and cards.

According to Brian Housh, who is leading the effort, sponsors are fast reserving their spot in the game because it’s a creative and fun way to advertise themselves. Sponsorships are also key to making YS-opoly a truly Yellow Springs game.

“The whole goal is to make it reflective of the flavor of Yellow Springs, so it makes sense that all the iconic organizations and businesses participate to reflect that,” said Housh, who is also the marketing coordinator of the Yellow Springs Arts Council.

The board game, initially the vision of Jailhouse Suites’ Bob Swaney, is meant for villagers and visitors alike, Housh said.

“I see this benefits both our local community and our image-building around the region,” Housh said.” It’s nice for everyone to participate in this project to have community collaboration and something cool that we can all enjoy.”

Businesses and organizations that want to be featured in the game should contact Housh at ysopoly@gmail.com or 937-319-1116 by Feb. 28. Those with suggestions for cards or other aspects of the game can email them to Housh or post them to the YS-opoly Facebook page.

Sponsorships rates vary from $50 to $1,500, depending upon whether the organization wants to brand the game’s money, reserve a regular or prime spot on the board (it costs more for a corner spot or one with a logo), be on a chance or community chest card, underwrite a player piece, or be listed as a sponsor on the box. Families and individuals who buy a game ahead of time at the retail price of $25 will also be listed on the game’s packaging.

The Monopoly board game by Parker Brothers debuted in 1934 and was based upon an older game designed to show the negative aspects of concentrating land in private monopolies. Since then there have been numerous spin-offs, from Anti-Monopoly, where players try to indict monopolized businesses and bring back the free market, to thematic versions like Faerie-Opoly, Cat-Opoly and Bible-Opoly to other geographic adaptations like Cleveland-Opoly. YS-Opoly would be officially licensed through the copyright owner and produced by a small Cincinnati company, Late for the Sky.

Though some villagers have said a capitalist game is a strange fit for Yellow Springs, Housh said there is common ground between community and commercialism.

“We shouldn’t beat around the bush about how important it is economically to promote the village,” Housh said. “It’s hard to deny that we need to rely on the tourism industry to thrive as a community…I’d like to think the commerce and community pieces can blend together.”

The initial design of YS-Opoly has its own unique features. The four sides of the board correspond to the four retail areas in town — Xenia Avenue, Corry Street, Dayton Street and King’s Yard. Instead of the four railroad companies, there are the four pillars of the YS Experience — Nature (Glen Helen), Wellness (Yoga Springs), Arts (YS Arts Council) and Education (Antioch College). Of course, until sponsorships are confirmed, nothing is set in stone.

The group hopes for an initial run of 1,000 to 2,000 board games. In addition to getting out their brand, sponsors will receive a YS-Opoly game for every $25 sponsored that they can either sell or give away.