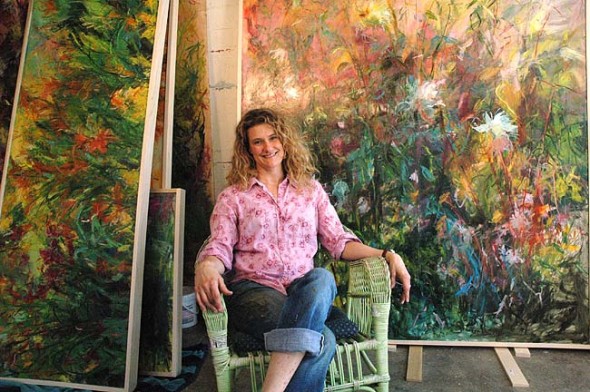 Jennifer Rosengarten sits in front of her many large, colorful oil paintings which are on display at the Dayton Visual Arts Center. (photo by Diane Chiddister)

Rosengarten’s large, expressive oil paintings will fill the walls of the exhibit, “Constructions of Space: Tess Little and Jennifer Rosengarten,” in which Little, a sculptor, will exhibit her work on the floor space. The exhibit runs through June 15.

While Rosengarten has exhibited her work in many Dayton, Cincinnati and Santa Fe galleries, she has worked for the past year and a half to get ready for this event.

“It’s the most significant show I’ve had,” she said in an interview last week.

Rosengarten describes her work as “on the fence between abstraction and representation,” and lists as her influences Cezanne, Matisse and Joan Mitchell, among others. Her paintings are clearly inspired by the natural world, such as the image of a golden maple in October, or white dahlias in her garden on a summer evening when the doves begin cooing, her favorite time of day.

But the finished work is far from just representation. She takes the spark of that image into her studio, where it mixes with memories, photos and emotion to become its own creation.

“People think I paint from life, and it starts that way, but then becomes a dialogue with the painting itself,” she said. “The color, the lines, the shapes take on their own life.”

For instance, the painting that began with the white dahlias ended up with deep blues as well, in what Rosengarten sees as the tension between light and darkness that animates any good painting.

Rosengarten sometimes worries that her paintings are too “pretty,” and she aims for something different, incorporating beauty but going beyond beauty as well.

“To me, there has to be an element of coming through something, because to me that’s what beauty is,” she said. “The level of emotion has to do with that contrast between light and dark.” And many of her works have to do with endings, such as how it feels to be in the garden at the end of summer, or at the end of a day.

And after many years of painting, Rosengarten finally realized that perhaps there’s a reason her works are so large.

“If there’s one reason I paint, it’s that I’m always trying to create a space for me to be in, a space where I want to be,” she said. “It needs to have a lot of life force, the energy of living things.”

Rosengarten moved to Yellow Springs with her husband, Chad Runyon, and their son, Jack, 12 years ago. The two grew up in the Dayton area, and Yellow Springs figured into Rosengarten’s career as an artist, as her Wright State University teachers Ernie Koerlin, Deborah Chlebek and Diane Fitch were all artists who lived in the village. She then spent several years in the area preparing her portfolio for graduate school, and won a full scholarship to Boston University, where she received an MFA. Also at Boston, she won the art school’s $15,000 annual award, which allowed her to travel to Europe to see the great paintings she’d always wanted to see. She then lived in Rhode Island for several years, working as a waitress, teaching at Providence College and painting in her free time. Then Rosengarten re-connected with Runyon, whom she had known growing up, and the two lived in Taos, N.M., Portland, Maine and Rhode Island, until deciding they wanted to be closer to their families.

“We thought the only place we could live in Ohio would be Yellow Springs,” she said.

Rosengarten has taught part time at University of Dayton for the past 11 years, although she recently gave up that job. She’ll miss the students, she said, but looks forward to having more time to paint. Her art is selling well, especially to corporate clients who can make use of her large canvases, and she recently sold work to Premier Health Partners and to the Dayton developer Richard Danis. Galleries sometimes say her work is too large to exhibit, although she has displayed work at the Meadowlark restaurant in Dayton.

Over several decades as a painter, Rosengarten’s work has evolved. It’s hard to believe, looking at her current work bursting with life and color, but her early work focused on interiors, and she used darker colors.

“I guess I was hiding,” she says of earlier work. “I finally came out of my room, into life.”

Her work, as well as becoming more inspired by the natural world, has also become “looser in mark and lighter in palette,” she said. And she has grown out of her earlier need to make big artistic statements, she said.

“I think it’s enough to be in the day, and talk about what that was,” she said. “The day can be dense with emotions. I’m letting go of the pretense of what I should be doing as an artist to experience things as fully as I can.”

The Dayton Visual Arts Center is located at 118 North Jefferson St., Dayton. Hours are Tuesday through Saturday, 11 a.m. to 6 p.m.