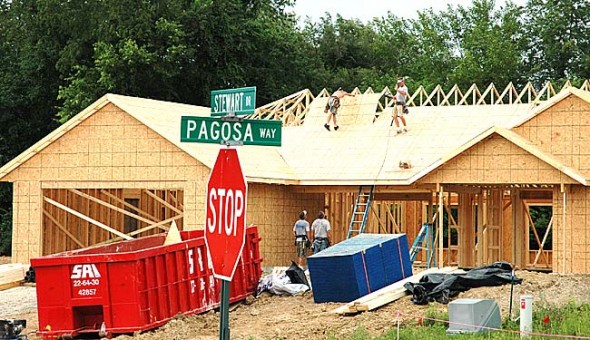 Construction has picked up at the Birch III development on the village’s south side where 21 houses are completed or under construction in the 40-lot subdivision. This week workers from Trippensee Construction erected the roof on a custom home built for an out-of-town couple. On the roof are, left, Tyler Ball and Bobby Trippensee. On the ground are Terry Kitts and Ron Smith. (Photo by Megan Bachman)

Building on again at Birch III

Development of a 40-lot subdivision on the village’s south side, first approved eight years ago, is finally taking off under new ownership and a rebounding housing market. In the last two years, the number of homes in the 21-acre Birch III development increased from seven to 21 with construction pending on three lots. Four other lots have already been sold leaving just 12 lots still available.

Builder Chuck Crabill of Sugartree Homes, who bought the remaining property in July 2011, attributes his success in part to a distinctive business plan in which Crabill finances and partially builds a spec house which can then be custom-finished to a buyer’s wishes and completed in about 10 weeks.

“We’re always trying to keep a home or two under construction,” Crabill explained. “Is that unique for the market today? Absolutely.”

According to Crabill and Birch III realtor Rick Kristensen, the development is also unique in the local real estate market because it features new custom and semi-custom houses.

“This is there for people to build their dream home,” Kristensen said. “We’re trying to give people an opportunity to purchase something new, which is something Yellow Springs is really lacking.”

While house prices are above the local average, Kristensen noted that Birch III homes are sold at a “competitive value” and have a square footage price typical for the village.

Birch III’s custom homes typically sell from $250,000 to $350,000, which includes a lot listed around $60,000. The subdivision is located between Glen View Drive and Stewart Drive and just north of East Hyde Road on the southern end of the village.

Crabill previously built five homes in the plat for homebuyers when it was owned by Mark Bertke and Doug Eastham. He also donated his time to manage the construction of a Home, Inc. house on Davis Street. Crabill’s own construction company, Sugartree Homes, is based in Clarksville in Clinton County, where he resides with his family.

In addition to putting the final touches on one of Crabill’s spec homes, buyers can also design a home from the ground up. The look and features of many houses in the development are similar and include bright external colors, basements, open floor plans, vaulted ceilings and screened-in porches, Crabill said. But each house is different. The variety in house designs was part of the original developer’s vision because it is more interesting for home­owners, Crabill said.

“The original goal of the subdivision was to be unique rather than cookie cutter — we’re just following through on that plan,” Crabill said. “When you do the same designs, there’s no fun in that. There’s no putting personality in it.”

The development is zoned Residence A, the lowest density residential area in the village. It also carries additional covenant restrictions to preserve the look of the subdivision and value of existing homes, Crabill said. For example, houses must be a minimum of 1,800 square feet for a one-story house and 2,200 square feet for a 1.5 or two-story house, which is far larger than the minimum allowed in the Village’s proposed zoning code.

Energy efficiency is a factor in house design, Crabill said, and some residents have gone even further; the development has two residences with geothermal heating and cooling systems and one with a solar photovoltaic array.

Additional amenities at the development include two cul-de-sacs to limit thru traffic, a conservation easement around the property’s periphery to encourage native plant species and a five-acre parcel of protected greenspace owned by the Glen Helen Association which abuts the property to the southeast, according to Kristensen.

Antioch University sold the Birch III plat in 2005 to developers Eastham and Bertke, who were partners in the company Purple Sage. Their development plan for 40 single-family homes was approved later that year. When that partnership ended in 2006, Bertke owned the development outright before looking to sell it in 2011, according to Crabill. Crabill, who has worked in the construction industry for 25 years, done quality control for large construction companies and built between 400 and 500 homes, jumped at the opportunity to buy the development, he said.

Crabill said he is pleased with the turnaround in sales over the last 18 months and also credits the village itself as an added selling point for his homes.

“It’s a nice little community — that’s why people want to live here,” Crabill said. “It’s a safe, family-friendly environment and has a lot to offer.”

Birch III isn’t the only place of recent housing growth. Local real estate sales have rebounded in the last two years, according to Kristensen. In 2012, 50 homes were sold, a tally not seen in the four previous years. And sales in 2013 are on pace to reach as high, he said. There has been a particular increase in house sales in the above-average price range of $250,000 to $400,000. Low interest rates are helping to spur sales, he added.

New homeowners in Birch III are mostly moving into Yellow Springs from outside the village and include families with children, empty nesters, and people working at Wright-Patterson Air Force Base, Kristensen said. Most new buyers have some prior connection to the village, Kristensen added.