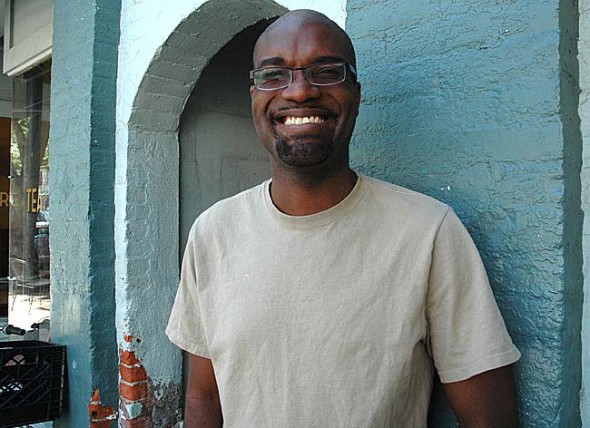 For the last year Derrick Weston has been the pastor of the First Presbyterian Church and director of Antioch’s Coretta Scott King Center for Cultural and Intellectual Freedom. Weston leaves next month to return to his hometown of Pittsburgh, where he will work for a faith-based organization that empowers inner-city youth. In light of the acquittal of George Zimmerman in the fatal shooting of Florida teen Trayvon Martin, Weston said his work with young African Americans will be even more critical. (Photo by Megan Bachman)

Pastor Derrick Weston broke down in tears during his sermon last Sunday. Talking about the outcome of the trial in Florida of George Zimmerman, the man acquitted in the fatal shooting of 17-year-old African-American Trayvon Martin, Weston told parishioners at the First Presbyterian Church that they should be equally heartbroken.

“We have a system that tells African-American males that their lives aren’t worth much … and we shouldn’t settle for it. We should constantly be pushing on a system that gives that message,” Weston said in a later interview.

Weston will soon leave the church he has led since January 2012 to work towards just that cause as he becomes the director of a non-profit community development organization that empowers inner-city youth in Pittsburgh. Weston’s final sermon is Sunday, Aug. 4.

While he was here, Weston spurred a growth in both membership and attendance at the First Presbyterian Church which has had a dwindling congregation and difficulty keeping a pastor.

In addition to working part time at the church, Weston was the director of the Coretta Scott King Center for Cultural and Intellectual Freedom at the revived Antioch College, where he helped create an atmosphere on campus where diversity was appreciated, he said.

Weston said splitting his time between the two institutions was emotionally, physically and spiritually draining but that he leaves with “great love and affection” for the Yellow Springs community.

“As much as I love the organization I’m going to, it wasn’t a slam dunk decision. I was very compelled by the idea of raising my children in this community,” Weston said, citing the close-knit, community feel of the village. Weston, who lived in Springfield with his wife and two young children, was actively looking to buy a home in Yellow Springs.

Weston will return to his hometown to head the Pittsburgh Project, a faith-based organization in the city’s rough north side that provides free-of-charge home repairs and runs after-school and violence-prevention programs for inner-city youth, among other programs. Weston worked at the nonprofit for 10 years before leaving for seminary with hopes of returning to lead the organization. As the director, he’ll oversee a staff of 28 with an annual budget of $2–3 million.

At the First Presbyterian Church, Weston’s topical sermons regularly drew between 50–60 congregants on Sundays, whereas before his arrival attendance hovered in the 30s, Weston said. The pews swelled with both new visitors and young families. Weston said he learned to preach with the Bible in one hand and a newspaper in the other.

“Religion can feel like we’re talking about this old, dead book and then everyone’s going to check out,” Weston said. “One of the things I’ve tried to do really well is connect what our faith tradition teaches us with what’s happening in the world today. … It makes our faith relevant and makes people feel they have some agency in the world and that we can do our small piece for justice.”

Weston said he can’t take all the credit for the church’s rebirth. He just emphasized the church’s strengths — its creative and passionate members and social justice leanings. He leaves with hope for the church’s survival, but said all churches today need to be more collaborative and less territorial in the face of the cultural trend of fewer churchgoers.

“It’s a challenging road ahead and it also has a lot to do with culture,” Weston said. “The more [church] gets associated with right-wing politics, that’s going to hurt churches. … We bear the burden of responsibility that there are progressive Christian voices out there who care about social justice, LGBT issues … and who do so because of their faith.”

Several times during Weston’s tenure he scrapped a prepared sermon to address a timely issue, such as when there were mass shootings in Aurora, Colo. and Newtown, Conn. Last Sunday, Weston awoke at 5 a.m. to find out the news about the Trayvon Martin case. Coincidentally, the readings for the week were on the story of the Good Samaritan, in which Jesus defines loving thy neighbor as helping a person who had been beaten lying by the side of the road.

“Justice requires more of us than helping hurt people on the side of the road. We should ask the question: Does the road itself need to be changed?” Weston said he told congregants.

People were moved by Weston’s sermon. Later in the day at a candlelight vigil at Gaunt Park for Trayvon Martin, Weston was heartened to see a mix of white and black villagers sharing the same concerns and same hurt over the verdict, he said.

Weston is also proud of his accomplishments at Antioch. He helped organize, with villager Cathy Roma, the World House Choir, a choir dedicated to singing about social justice and peacemaking. A highlight was when the World House Choir performed at the Madison Correctional Facility and a choir of 16 inmates sang along, he said.

On campus, Weston organized a forum on gun control and was impressed how respectful attendees were while holding divergent views on the topic. He said he helped create a climate on campus where diversity was appreciated and students with different backgrounds could learn from one another.

But with Antioch’s small student population, differences were amplified and cultures were “challenged rather than reinforced,” he said. As a result, the college lost students it had difficulty accommodating, including, for example, a Muslim student who did not have a place to pray, Weston said.

As Antioch grows (it will double in size this fall), Weston hopes the college focuses more on diversity. While he understands the college’s need for caution in addressing issues around race, class, gender and LGBTQ representation, he warned against inaction.

“Unfortunately because of accreditation, there is a narrative that the school is very fragile. It’s not a false narrative but because of that there are some things we don’t want to tackle,” Weston said. “That is unfortunate. I think in the process you run the risk of not voicing the concerns of the very people that will find a home at Antioch.”

Weston said working in Yellow Springs has been rejuvenating for him since his values were so supported by the local community. While he leaves to work in a more needy community, he said there is still important work to be done in Yellow Springs, especially through the 365 Project, which seeks to recognize African-American culture year-round, and in keeping diversity a centerpiece at Antioch.

“I don’t want people to lose sight of the fact there are issues of justice and diversity in the community,” Weston said. “You can’t sit aback and rest and say, ‘We have all of our issues solved.’”

For more information on the Pittsburgh Project, visit http://pittsburghproject.org/.