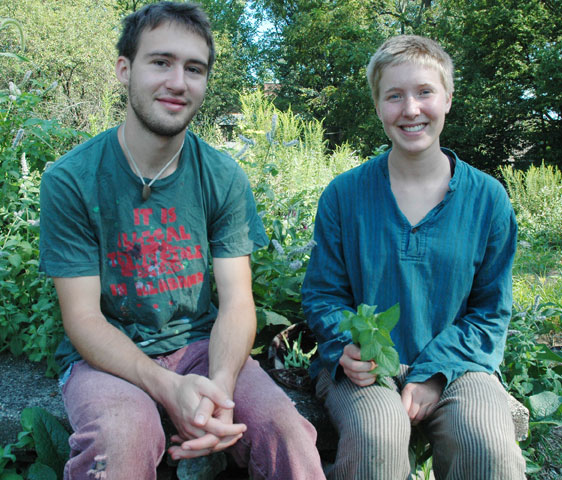 Antioch students Gabe Amrhein and Norah Mermis are two of the organizers of an upcoming skill-share workshop from 10 a.m. to 4 p.m. on Saturday, Aug. 24, in McGregor Hall on the Antioch campus. The event features 16 sessions on everything from zine-making to fermentation and is free and open to the public. Here Mermis and Amrhein gather spearmint in preparation for Mermis’ session on making herbal tea remedies. (Photo by Megan Bachman)

The sessions, taught by students, faculty, alumni and local community members, are all free and open to the public. In fact, that’s the whole idea behind skill-share, according to Gabe Amrhein, one of the students putting on the event as a final project for the Global Seminar on Education.

“The idea behind it is that there is a lot of untapped knowledge and skills that don’t necessarily surface,” he said. “This is just to get that knowledge or skill circulating.”

As part of the skill-share workshop, Antioch’s artist-in-residence Curtis Goldstein will offer a session on plastic fusion, a process of ironing and layering recycled plastic bags and embedding trash objects into the layers. Participants will make their own individual pieces, which will later be joined together to create a plastic quilt to be displayed on campus and in the community. That workshop will be at the sculpture annex next to the Antioch Amphitheatre from 1 to 5 p.m., and participants should bring an iron and extra plastic bags if they can.

Organizer and Antioch first-year student Norah Mermis will teach how to make herbal tea from plants she grows at the Antioch Farm, including mint for digestion and headaches, echinacea for immune-building and catnip as a sedative. The self-described tea enthusiast harvests and dries the herbs on campus for the dining hall, and uses them for her own health and well-being, she said. Mermis looks forward to both teaching and learning at the workshop.

“I’m really excited to be a part of it,” Mermis said. “I’m amazed by people in the community of Yellow Springs. We have so many people with knowledge here. This brings us together to share things with people we normally wouldn’t.”

Global Seminar on Education instructor Geneva Gano said that the workshop is an opportunity for intergenerational and lifelong learning and fits the college’s vision of a strong town-gown relationship, known as “Antioch Village.”

The non-traditional model of education of a skill-share has had some history at Antioch, Gano added, including most recently in the period of the NonStop Liberal Arts Institute, a group of former Antioch faculty and staff that organized educational events in town when the college closed in 2008. Some former NonStop instructors will be teaching at the skill-share workshop, including Migiwa Orimo (sushi-making) and Michael Casselli (3–D printing).

The skill-share workshop is organized into four sessions, with four one-hour workshops during each session. Four of the workshops are specifically designed to accommodate children as young as seven. There will be free coffee and pastries in the morning and a free community pizza lunch at 11:30 a.m.

According to Amrhein, a first-year student from Yellow Springs, there was such an overwhelming demand to teach a session that organizers had to cut off requests. Amrhein himself is teaching a session on using human urine as a fertilizer from what he learned on co-op. He expects a good turnout from students, even though it’s not a class requirement that they attend. And Amrhein appreciates that students could organize the event as part of a class — otherwise students are too busy with classes and extracurricular activities to pull something like this together, he said.

The educational model of skill-sharing is one that Amrhein, for one, believes in.

“It’s really about sharing, about giving something and taking something in return,” he said. “It seems like such a basic concept to most people but it’s something we take for granted and it’s not how the world operates.”

For more information and the full schedule of workshops, visit https://www.facebook.com/ysskillshareworkshop .