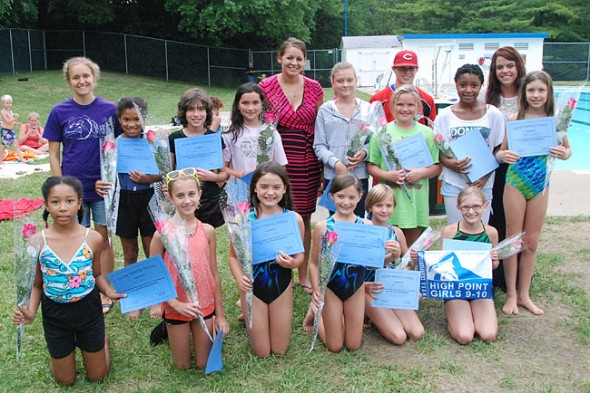 Henry David Thoreau said, “All misfortune is but a stepping stone to fortune.” That pretty much sums up the Sea Dogs swimming season. After only three practices, the Gaunt Park pool closed for an indefinite period of time. The Sea Dogs re-scheduled and changed the venues for meets, but were unable to practice. Eventually, the pool re-opened, but with only six practices under their belts, the Sea Dogs faced the Forest Ridge Fighting Fish at their pool and lost. One week later they took on the Clinton County Barracudas, but again were defeated.

The team knew they had to practice harder to make up for lost time, so they began practicing five days a week instead of four. On July 9, they were primed and looked great in the water for their first home meet against the Waynesville Blue Dolphins. Unfortunately, it was rained out. In their final away meet against the Greene Valley Recreational Swim Club, the Sea Dogs suffered one more defeat.

Still, the Sea Dogs were determined (cue the theme from Rocky here). In the final two meets, and their only home meets, the Sea Dogs were victorious, with a 228 to 220 win over the Oakwood Dolphins and, in a re-match with the Forest Ridge Fighting Fish, 333 to 252. At championships, it is rumored they needed a wheelbarrow to cart all their medals to the car. The 9–10 girls also won the high point award for scoring the most points of any team in their age group.

Throughout the season, team spirit and unity were amazing as they turned misfortune into fortune. Parent support was incredible. At the end-of-season awards banquet, the Sea Dogs honored two special parents: Tommaso Gregor was selected as the volunteer of the year for refurbishing the blocks and flag poles, and Rachel McKinley was recognized for her years of dedicated service as a board member.