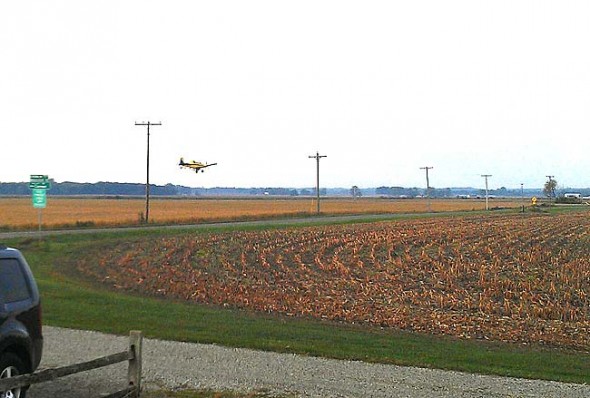 Local farmer Jim Clem will soon begin aerial seeding on his fields north of the village. Clem is spreading the word that the aircraft won’t be spraying pesticides but seeding cover crops to help enhance the soil. Here an aircraft seeds an area field. (Photo courtesy of Integrated AG Services)

Seeds, not pesticides, fall from sky

The small, low-flying aircraft that will soon buzz area farm fields are nothing to worry about, according to local farmer Jim Clem. At this time of year, the planes aren’t spraying pesticides but spreading seeds in an effort to plant cover crops that will improve the soil.

For the second year, Clem will use aerial crop seeding in fields with standing corn and soybean plants to establish a winter cover crop of annual rye grass before the fall harvest. Over the winter, the rye grass will “put a blanket on the soil” to protect it from erosion by wind and water and will also increase its organic matter, improve its structure and reduce soil compaction, according to a letter Clem delivered to his neighbors. The fields will be green all winter long.

“We want people to know what we’re doing. We’re trying to be good stewards,” said Clem, a no-till farmer for the last 25 years. Added Clem in his letter: “We are planning to live and farm here for many years to come. Because of this we want to do everything we can to protect our community and our farm land.”

Clem and his son, Brian, farm much of the land surrounding Yellow Springs, including at Whitehall farm across from Ellis Park and a 100-acre tract just north of the village on East Enon Road, which Clem purchased last year from the Pitstick family. Residents can expect to see the planes in both areas sometime in the next two months. A plane can seed a 100-acre field in about 20 minutes, according to Dave ­Schneiderer of Integrated Ag Services, a local consulting firm that Clem uses.

Clem, a farmer of 34 years and Tecumseh Land Trust board member for the last four years, is hoping that the aerial application of seeds pays off for his farm operation. While the benefits of cover crops are clear, the problem is how to plant them during a small window of time.

According to an article in the publication No Till Farmer, rye grass should be planted in September in the Midwest since it needs about 60 days growth before a hard freeze to get established and survive the winter. But corn and soybeans are sometimes not harvested until October. Because of the cool summer, this year’s corn crop won’t be harvested until mid-October, far too late to plant rye grass, Clem said. Spreading the seeds from the air is becoming an increasingly popular solution, added Clem, who is still experimenting with the method.

“This is now hitting the mainstream,” Clem said of aerial cover crop seeding. “It’s in its early stages, but there’s no question of the benefits of cover crops.”

Another challenge for farmers is what to do with the cover crop before planting next year’s crop, Clem said. Many farmers “burn down” the rye grass in the spring using a glyphosate herbicide like Roundup, according to No Till Farmer.

Clem doesn’t use aerial application for any other agricultural process, but other farmers in the area might, he said. The best way to determine what’s being sprayed from an aircraft is by the time of the year. Herbicides are often sprayed in the spring ahead of the planting season, while area corn farmers sometimes spray fungicides on their corn fields in the summer months, Clem said. Fall typically means the spreading of cover crop seeds, since farmers would have no reason to use pesticides so late in the season, he said.

The first aerial application of pesticides in the U.S. took place in Troy, Ohio in 1921, while today aerial application accounts for up to one-fourth of the delivery of crop production products in the U.S., according to the National Agricultural Aviation Association. Aerial seeding has more commonly been used to replant vegetation in area ravaged by wildfires but is increasingly being used to plant cover crops, according to the publication AgAir.

Residents also shouldn’t worry about drifting seeds, since the pilots can expertly deliver the seeds while dodging telephone wires and cell phone towers using GPS navigation systems, Clem said. They typically fly just 10–50 feet above the crops, he added. And there is nothing harmful about annual rye grass seed, which is non-GMO and available as grass seed at area garden stores, Clem said.

For a video of the process — “Cover Crops: A Farmer’s Tool in Environmental Stewardship” — visit: http://youtu.be/zFtSpifIA1g

One Response to “Seeds, not pesticides, fall from sky”