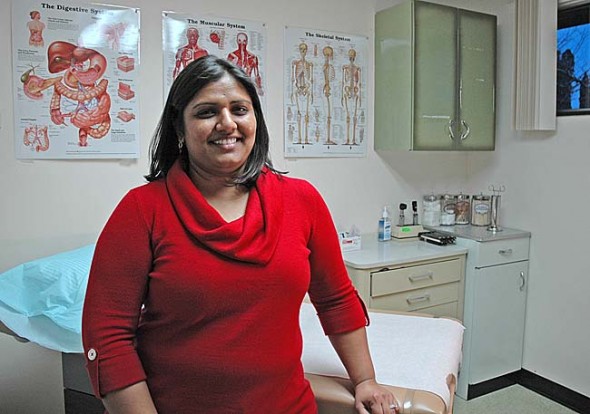 Dr. Neha Patel joined Community Physicians of Yellow Springs last month when Dr. Paul Van Ausdal retired. Patel, who specializes in internal medicine and pediatrics, said her focus is on educating patients about their health and how they can make lifestyle changes to fight disease. (Photo by Megan Bachman)

When patients leave her office, new local physician Dr. Neha Patel wants to make sure they have their hands full.

Patel, who believes in the importance of lifestyle changes in fighting disease, wants her patients to leave armed with knowledge — and handouts — on what they can do to get better or stay healthy. It’s part of a focus on education that Patel, a primary care doctor and pediatrician, brings to Community Physicians of Yellow Springs.

“I love teaching about what’s going on,” Patel said in an interview this week. “Even if it’s diabetes and you’ve had it for 10 years, I want to make sure you know what our goals are for treatment and the newest recommendations. I like to have [patients] go home with some literature.”

Patel, 32, took over when Dr. Paul Van Ausdal retired in October after 34 years at the family practice, which is part of the Kettering Health Network. She now shares the local office, and patients, with Dr. David Hyde.

And because Patel specialized in pediatrics as well as internal medicine during her residency, infants and young children are starting to visit the office in greater numbers, Patel said. New patients, both young and old, are welcome, and the practice accepts self-pay and those with insurance that covers Kettering providers.

The combination of pediatrics and family practice gives Patel a chance for close relationships with her patients as they partner on the path to healing, she said.

“I like growing with families, getting to know everyone and seeing them get better,” Patel said.

Primary care doctors are in high demand these days. With an aging population and more people acquiring health insurance through Obamacare, demand for primary care physicians will grow by one-third in the next 12 years, according to a recent study, while medical school students are increasingly choosing more lucrative medical careers in fields such as anesthesiology. But Patel said she’s “never been in it for the money.” Instead she has always wanted to be a family doctor.

“I always knew I wanted to do general medicine — clinic-type medicine,” Patel said. “I’m not a big fan of the hospital, where you get someone in, get treated, send them home.”

Patel was born in India and grew up in San Jose, Calif. She completed her Doctorate of Osteopathic Medicine in 2007 from Kirksville College of Osteopathic Medicine in Missouri and her residency in Cleveland and also worked in Santa Rosa, Calif. before moving to the Dayton area in early 2012 with her husband, Birju, who is in the Air Force. Patel was working at a clinic in Miamisburg when she heard of the opening in Yellow Springs and wanted to work closer to home. The couple lives just down Dayton-Yellow Springs Road near the Kroger in Fairborn.

Patel said Yellow Springs reminds her of some northern California towns with its “eclectic feel,” relaxed attitude and friendliness, but that she is seeing the same types of diseases here that are an epidemic everywhere, such as diabetes and high blood pressure. One difference is that locally people seem more willing to make the needed lifestyle changes, Patel said.

“When I tell them they have to cut something out of their diet, they do,” Patel said of her Yellow Springs patients. “There have been few here that say ‘I will not do that,’ and I have heard that before.”

While Patel doesn’t scold her patients for bad behaviors, she also doesn’t shy away from telling them what they need to change, she said. For example, studies show that one in seven people will quit smoking if told by a physician to do so, according to Patel. So Patel tells her smokers to quit every time they come in, and already, after one month on the job, several have quit or cut back, she said.

Patel takes a preventative approach to health and always reviews a new patient’s diet, lifestyle, occupational hazards and family history when they come in for their first check-up, she said. Patel also is open to alternatives to medication and to herbal remedies, provided she can find studies that show they are effective and won’t harm the patient.

“I’m open to [herbs] but don’t recommend them first — diet and exercise changes I definitely recommend first,” she said.

Patel tells her patients about the importance of a balanced diet with a rich variety of fruits and vegetables and educates them on how to pick better foods when eating out, she said. She also recommends a multivitamin for those who are not eating a variety of foods in order to avoid deficiencies, she said. While she believes that alternative approaches such as massage therapy and chiropractic care have a place in staying healthy, “not everyone benefits from everything,” she cautioned.

When it comes to treating children, Patel supports the use of vaccines to avoid contagious diseases that are now returning as child vaccination rates wane, she said. Patel is willing to work with patients on a delayed vaccination schedule because “getting them vaccinated is more important” while she is also happy to provide information on its advantages.

“I definitely think that vaccines are beneficial,” Patel said. “I will provide them literature if they’re willing to listen, but I can’t change their minds.”

Another trend in healthcare is that patients are self-diagnosing on the Internet at sites like WebMD, which Patel welcomes. Patients now regularly come to the office with a printout of what they believe to be ailing them.

“It’s fine with me, because it means that they are interested,” Patel said. “WebMD can be dangerous at times, but the majority of patients use it to learn about a condition, and I can confirm that for them.”

The regular check-ups that primary care doctors provide are important depending upon a patient’s family history of disease, Patel said. Even if someone is healthy, a primary care doctor who knows their medical history and who they can visit in case of an illness or emergency can be useful. Patel and Hyde share a beeper for patient emergencies — one of them is always on call.

Patel added that she hopes that Community Physicians becomes a place for people who are afraid or anxious about visiting a doctor’s office. She tries to make her patients feel “at home,” and renovations are planned to make the building more updated and comfortable for patients, she said.

Above all, Patel believes that her role as a doctor is to help her patients on their personal health journey.

“Patients take the lead on their own health — they are not going to get better if they don’t want to,” Patel said. “If they want to get better, whether it’s a cold or a major illness, I’m here to tell them what I recommend, and if they choose an alternative method and it works for them, that’s great too. I want them to thrive.”