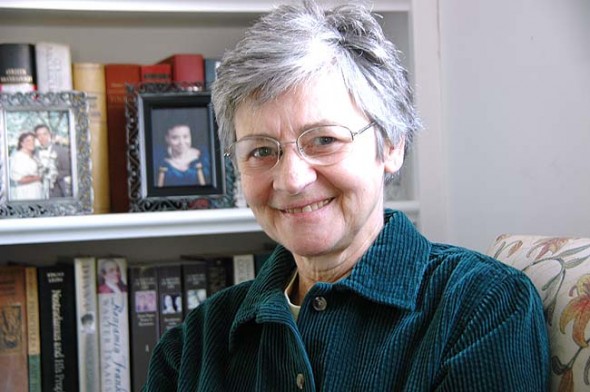 Angela Wright left the school board last month after 20 years and four full terms of serving the schools. (Photo by Lauren Heaton)

Having served 20 years as a Yellow Springs school board member over a span of three decades, Angela Wright has seen her share of ebb and flow in the district. From the excitement of her first years on a new board in the early 90s to the more recent pressure of trying to adopt a new district-wide learning model on a familiarly tight budget, Wright comes away with some thoughts about what is really important for the local schools.

1. If project-based learning, or PBL, is going to be successful, the schools need to slow down and reach out to involve the entire community, including the 45 percent of residents who are seniors.

2. The best use of digital learning is in remedial work to help students who are behind to catch up. And before the district incorporates new technology, it must ensure that every student has equal access to the necessary tools.

3. The schools need to work on closing the gap between high school graduates and first-year college students and be sure that every YSHS graduate is absolutely college ready.

Though the outgoing board, which held its last meeting in December, has not been perfect, Wright believes they should all be proud that the team of four administrators they hired soon after being seated are leading the district down a promising path.

“I walk away from this feeling good with where we are and extremely happy with the team we have,” she said. “For me the point is not to go back, it’s to ask questions and go deep with community involvement — because to me it takes a village to support a school system. The entire village.”

Wright first joined the school board in 1992, just after the first school income tax levy failed. It was an exciting time of renewal during which the board hired Superintendent Tony Armocida (who stayed 10 years) to balance the budget, renew the curriculum and reach out to the community.

“Tony did a fabulous job,” she said.

Wright served two terms and then took a break to continue to focus on her research in the pharmacology school at Wright State University. Then in 2002 she took up the mantle again and stayed for three more terms. Partly she did it because it gave her opportunities to be part of the lives of young people. But Wright also thought she could interest fringe community members in the collective importance of the local schools and be a voice for those who weren’t already engaged in education. She valued education and she knew that the reason school levies tend to pass in Yellow Springs is because the community is “education minded” and because the village has its own newspaper to keep people focused on the issues.

But lately, Wright feels, the district hasn’t done enough to solicit the public’s guidance in implementing the Class of 2020 Strategic Plan and approving the accompanying budgets. Participation in the schools’ decision making from the public at large has been better in the past, when Wright remembers villagers sometimes packed the board meetings to listen and comment on a particular spending trend or to present a potentially useful idea. The board at that time introduced the tradition of a second Committee of the Whole meeting each month specifically to discuss the bigger picture issues with the community. In order to grow and change in step with the community, the schools need to empower the community to become part of the process and not just as onlookers from the outside, and Wright is concerned that the current board rarely holds Committee of the Whole meetings, and thus does not engage the community.

“This needs to be a democratic process,” Wright said. “There’s not enough input from the community on how we should proceed with policies and funding certain aspects of our schools.”

Her insistence on this point the past year has been met with resistance and was perhaps misunderstood as some kind of malcontent with the performance of the district’s employees. But the interpretation couldn’t be further from the truth.

“I think a lot of people have gotten the wrong impression, that [the board was] unhappy, that we were dragging our feet — but no, it’s just that things were happening very fast,” she said. “We have to remember that we are where we are today because we as a board brought in four youthful, creative people we knew would work well together, and we’re definitely not going to do anything to upset that very effective team.”

One position she has no reservations about was her representation on the board of the Greene County Career Center. The technical school grew significantly during her time as a board member, and she believes that the district could perhaps learn from the project-based systems at the core of their education model.

Project-based learning is still in development in Yellow Springs, and Wright is supportive of “new thinking” but cautious about continuing to teach the fundamentals, especially of basic math, chemistry, physics and all the sciences.

“My fear is that you go too fast… I’m old school,” she said.

She espouses due diligence with researching the data on particular methods before implementing them, as well as long-term fiscal responsibility. And the key to both is community involvement, she said.

“If the community is okay with it, fine. But if they say, wait, the levy was supposed to be for five years and now it’s going to be short, they should be asking questions.”

Wright was born in Milan, Italy. Her uncle, Amos Mazzolini, came to Antioch College in the 1950s to develop the lost wax casting technique for Morris Bean, and when she was 10, Wright came to Yellow Springs with her family to be with him. She graduated from YSHS in 1970, returned to Italy to attend medical school and has been back to visit regularly. Now it’s her time to reconnect with Italy again, she said in an interview last month.

Wright plans to continue to care for her family in the village, manage her family’s real estate business and continue to serve as the treasurer of the 365 Project and contribute as a member of the Odd Fellows Lodge.

She has high hopes for the schools she cared much for over the past 20 years.

“I wish the very best for the new board members coming on,” she said. “We engaged in a lengthy, thorough, deep search for the very best leaders we could get, and we got them…now we should allow them room to develop and at the same time not feel we can’t ask questions — questions can be positive!”