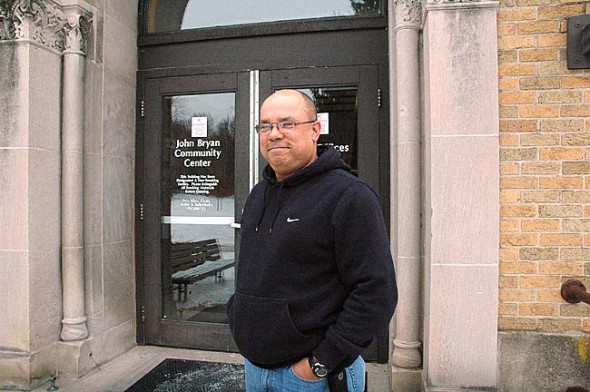 Kelley Fox, head of the electric and water distribution crews, will retire at the end of January after 30 years working for the Village of Yellow Springs. (Photo by Carol Simmons)

RECEPTION FOR RETIREES
A public reception honoring Kelley Fox, who is retiring from Village employment after 30 years, and Larry Campbell, who recently retired after 45 years, will take place Friday, Jan. 31, from 2 to 4 p.m. at Bryan Community Center.

The impending retirement of public works supervisor Kelley Fox at the end of this month has Yellow Springs administrators wondering how to replace the man in charge of keeping our lights on and our water running.

“It’s the right time,” says Fox, who will have clocked in 30 years of full-time employment with the Village effective Feb. 1. “Thirty years has always been the mark.”

And that doesn’t include several years of seasonal and part-time work between graduating from high school in 1980 and going full time in 1984.

Not that Fox has any complaints.

“I love this town,” he says, adding that he also cherished being able to work and raise a family in the town where he grew up. Having lived as a child at the corner of North College and Xenia Avenue while his father worked at Antioch College, Fox says the college was his backyard and Glen Helen was his playground. His schooling began at the Children’s Center and continued through Mills Lawn, the middle school “and all the way through high school.”

He still lives in town, with his second wife, Christina, and he says he especially enjoys having a job that helps villagers, including many former teachers, who were part of his childhood.

The man whom many consider indispensable to maintaining the town’s infrastructure says he’s grateful for opportunities the village gave him when he was starting out. Married on his 17th birthday to his first wife — “Nobody could tell me anything,” he says of his younger self — and a father before he graduated, he struggled to make ends meet. He says he entered a county welfare program that included work assignments in town. Terry Cox, who was head of parks and recreation for the village at the time, was the local program supervisor, Fox recalls. That experience soon led to his being hired first with the streets department and eventually on the combined water and electric crew, where over the years he earned a variety of work-related certifications and eventually became supervisor in 2006.

As Village manager in the 1980s, Kent Bristol was responsible for hiring Fox, and he gives credit for the 52-year-old’s job success to his hard work. “He’s done an admirable job,” Bristol says of Fox’s years of service.

That tenure has included untold late nights out in the worst of weather. Sub-zero temperatures, torrential rains, powerful winds: these are the conditions in which Fox and his crew often work. But Fox sounds almost gleeful when he talks about the extremes of the job.

The best part, he says, is being able to help local residents. The loss of power or water is stressful for anyone, and dangerous for people with medical conditions.

“Sometimes when you get their lights on, they come out and clap,” he said.

One of his proudest achievements is establishing a mutual aid agreement with other area communities. The program has benefitted Yellow Springs three times since its implementation: after the remnant of Hurricane Ike knocked out power in the village in September 2008, when a ice storm struck in February 2011 and when the water plant went down in 2012 after a massive tree fell and took out power lines deep in a wooded area.

The effects of Hurricane Ike and the ice storm also led Fox to implement a major tree-trimming project throughout the village. In a town that loves its trees, the work did not proceed without some complaints, but Fox says the effort was vital for the long-term safety and well-being of the community. Still, as a man whose main purpose is to help his fellow residents, it was a tough time.

“I love trees, too,” he says. “We don’t want to cut trees down just to cut them down. The goal is reliable, efficient electric service.”

Now, “we’ve got the trees where they’re ‘trained’” to grow around the power lines, he says. “It might not be as nice looking, but the lines are clear. I’ve had several people come to me and say, ‘You were right.’”

He dismisses talk that he can’t be replaced. “People said that about my predecessors. Enough information gets passed along, and the people coming up are good people. They’ve paid attention and learned a lot of things.”

And while Fox says he’s ready to see what his life brings next, he admits he’ll have a hard time not responding when village infrastructure issues arise.

“My wife always said, ‘Why don’t you take your boots off and relax?’ But I can’t. I’m always run-ready, ready for the call. That’s going to be the toughest thing.”

He’ll also miss his co-workers “big time” and the camaraderie “that happens every morning as we drink our coffee and talk about the day’s work — and other things as well.”

But he’s not without plans. As the holder of a gold pass to King’s Island, who loves the amusement park so much he’ll go alone if he can’t find company, Fox knows he’ll be making a few trips there along with some additional traveling, especially if it involves a beach. He’s happy, too, to be still young enough and have the energy to really enjoy spending time with his four grown children, eight grandkids, and a brand new great-grandson. What’s more, he’s also a part-time driver for Greene Cats, and he says he finds the work with the bus service’s elderly and disabled riders both humbling and inspiring.

“It’s called retirement. But I’m not retiring,” Fox says. “I’m just going to another chapter in my life.”