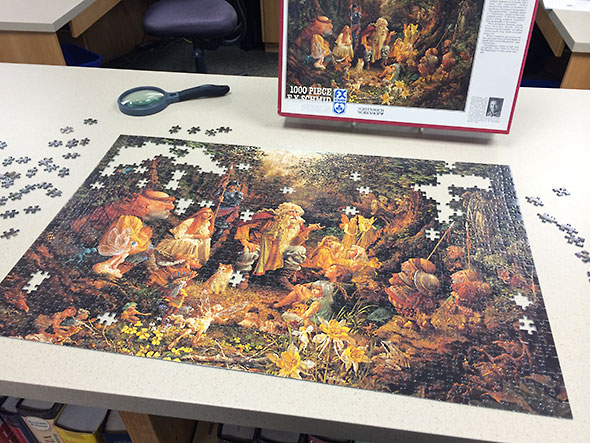 I joined a community project this past month. Shortly after the new year, a puzzle appeared atop the new reference shelf behind the main desk at the Yellow Springs Community Library. I could tell right away that it was an unusual puzzle. The first assembled pieces revealed the faces of the picture, an intricate collage of fairy tale characters gathered in a wooded glade to hear a great storyteller. The storyteller intoning “Once Upon a Time” had taken his seat, and a few fairies and two elfish sisters had found their places round his feet. 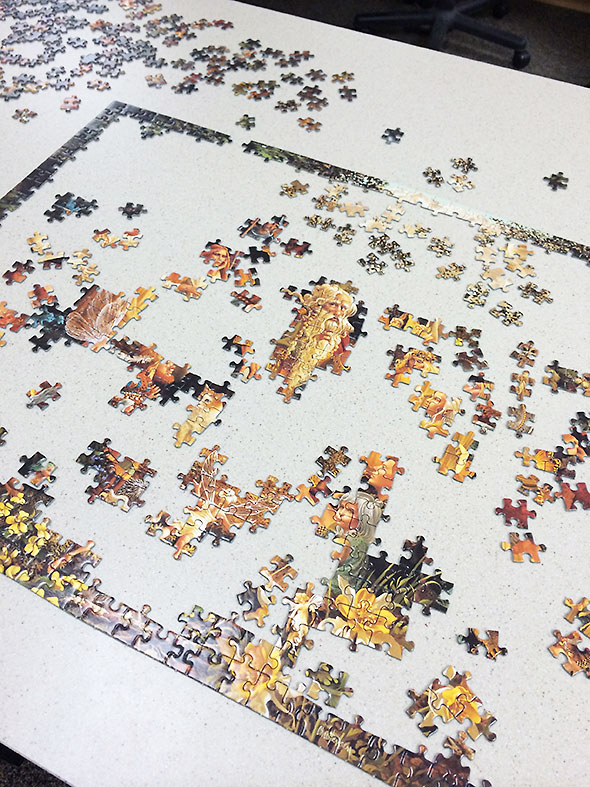 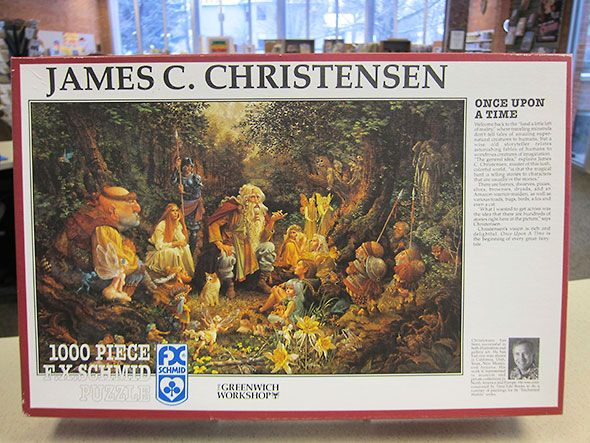 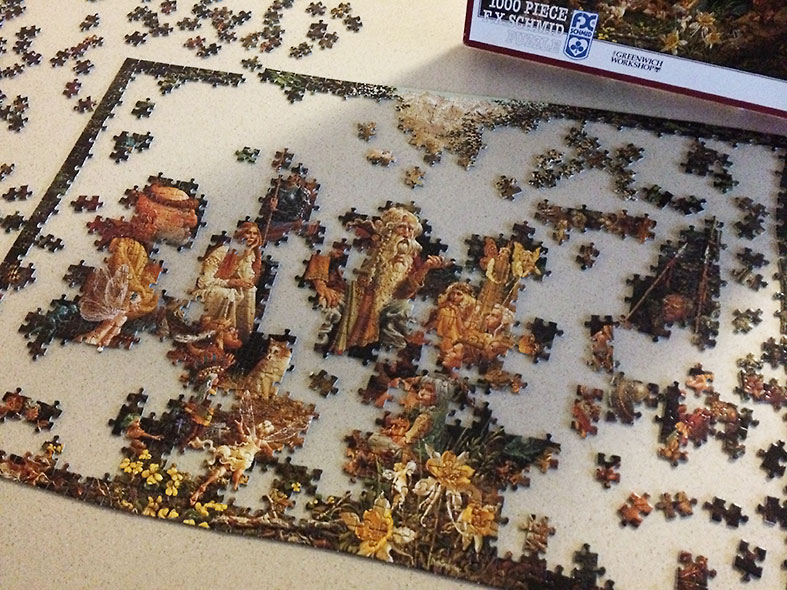 By mid January, fellow puzzlers had found almost all of the edge pieces and assembled the border of the scene. At this point, the specific challenges of the puzzle became clear. First, at least one edge piece was missing perhaps as many as three. Second, the small jigs of the puzzle were subtle in their differences and could easily slip into spots that they didn’t truly belong. I reconstructed the perimeter pieces twice myself before finding the proper fit, only one edge piece left unaccounted for. 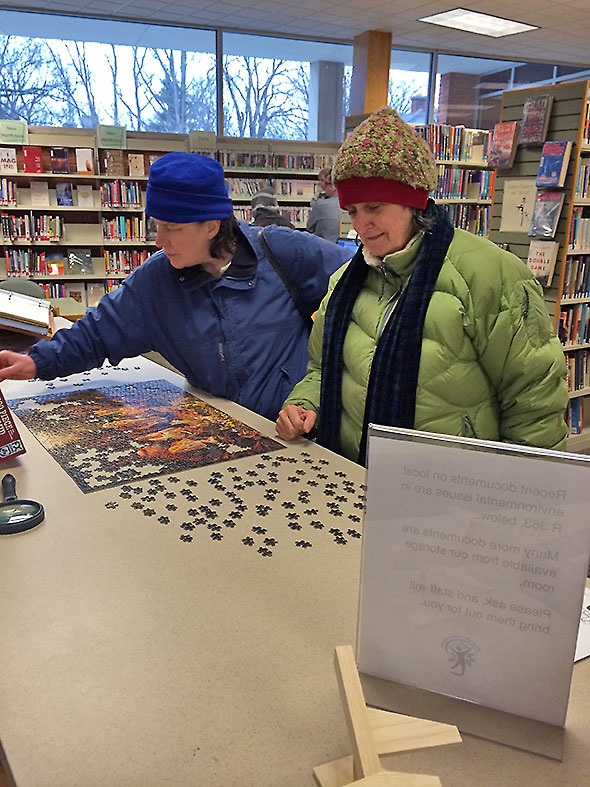 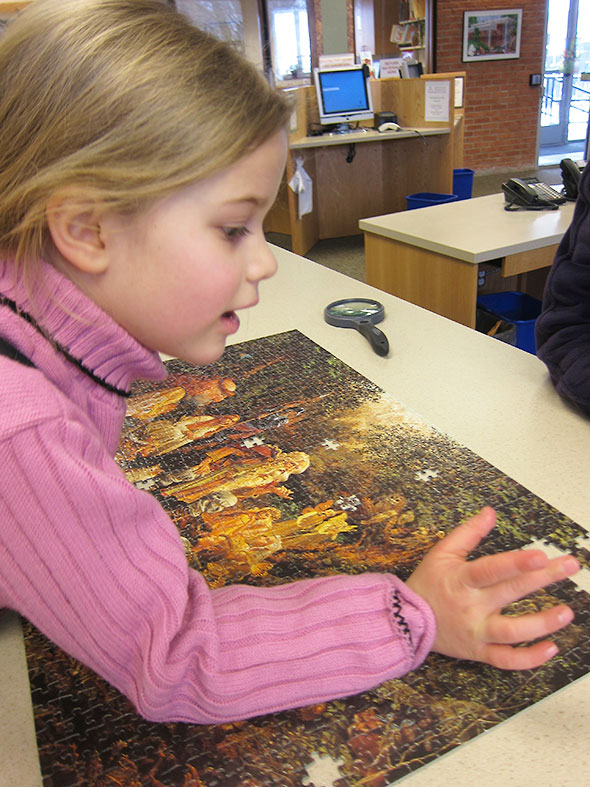 Over the month of January, several people worked diligently on the center of the puzzle. I shameless used the box cover to match shards of hair, skin, and cloth, this bead, that feather, and the many wooden staffs. As I worked, my admiration for the illustration grew. Each piece that fell into place revealed a new secret of the scene; previously unseen companions kept arriving in the glade falling under the spell of the storyteller’s tale. Sensing my delight in the puzzle, librarian Regan search the stacks and pulled James Christensen’s epic illustrated tale “Voyage Of The Basset” for me to take home so that I might enjoy Christensen’s sumptuous illustrations long after the library closed for the night. 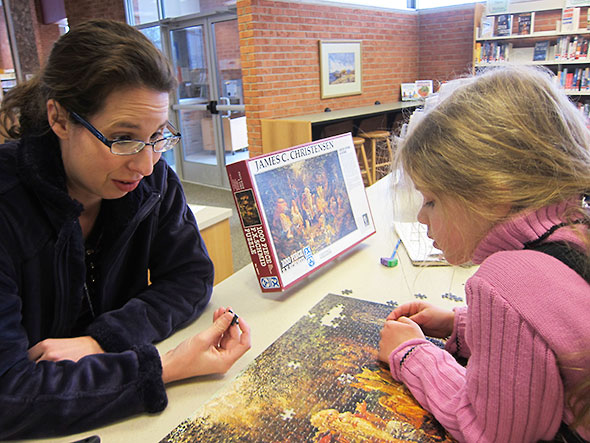 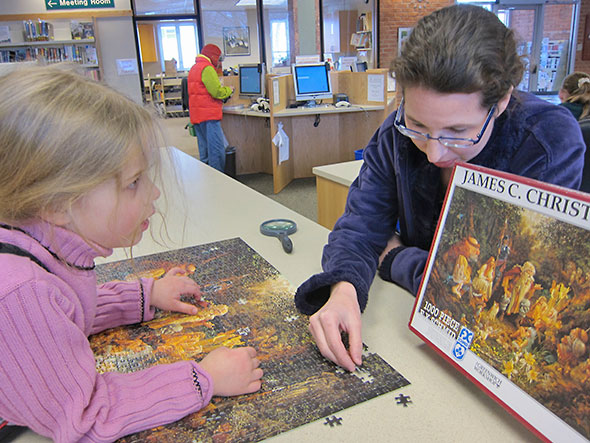 I used most of my time at the library to sort the jigsaw pieces. The predominate number of pieces look like animals with a head, a tail, and four legs. Some pieces look like men with a head, two arms, two legs, but no tail. Other rare pieces are like exotic three or four headed creatures. One-headless form is less animal, more like a four-leaf fern. 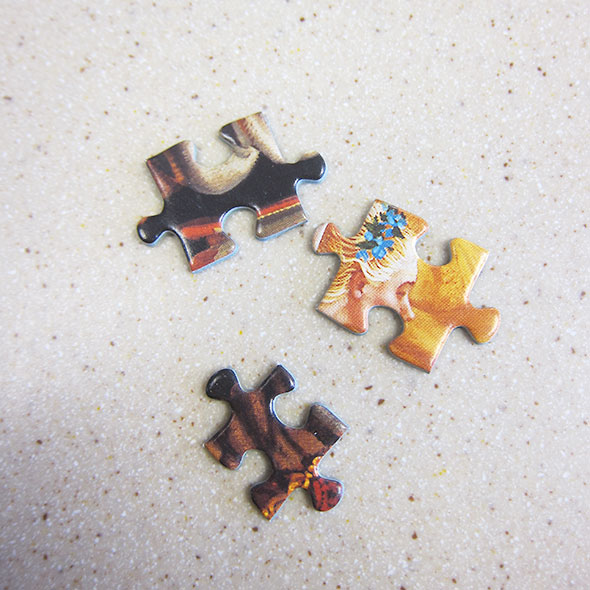 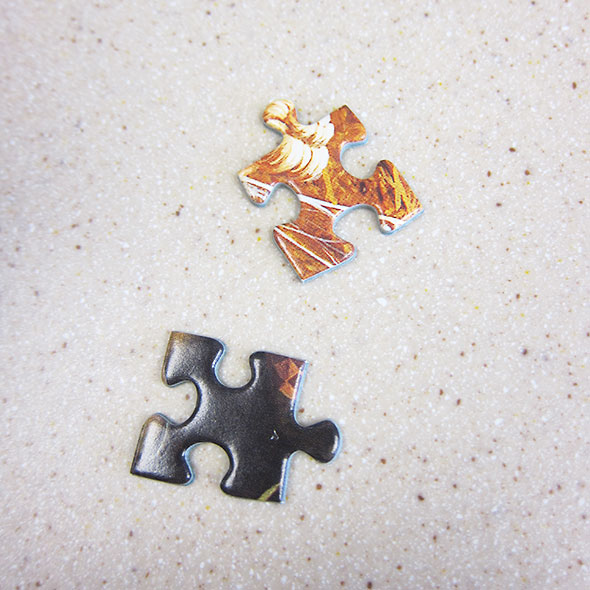 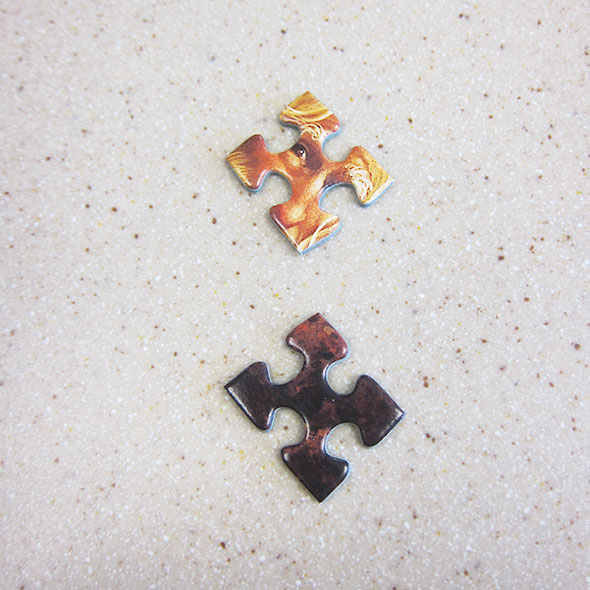 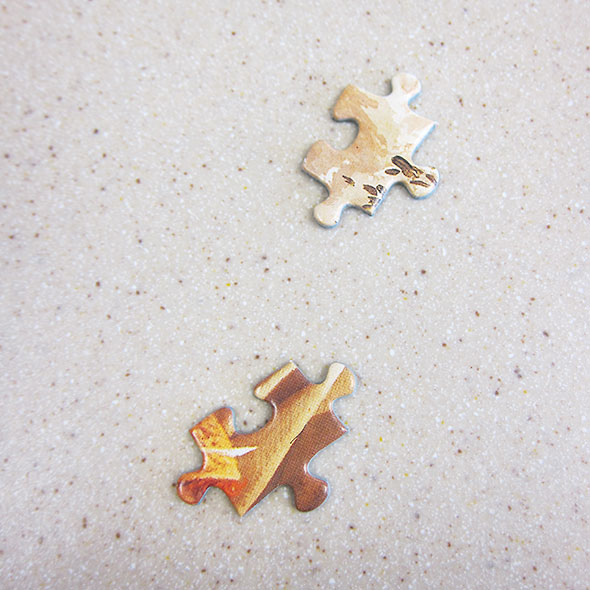 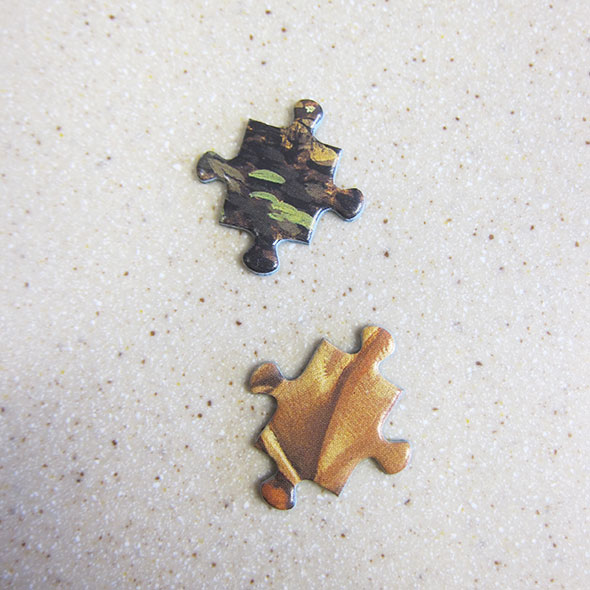 On several occasions, the library staff had to turn the lights out on me at the end of the day. I’d work to the very last second before closing, searching fitfully for yet another matching jag or jig. If left alone, I would work happily through the night mesmerized by the tale spun before me, so enchanted that I hardly noticed the announcements ticking off in 5 minute intervals, then two, then one. Tiny characters kept popping up in Christensen’s scene surprising me in their delightful bright and detailed vestments while others remained shyly in shadows revealing themselves only at the last. 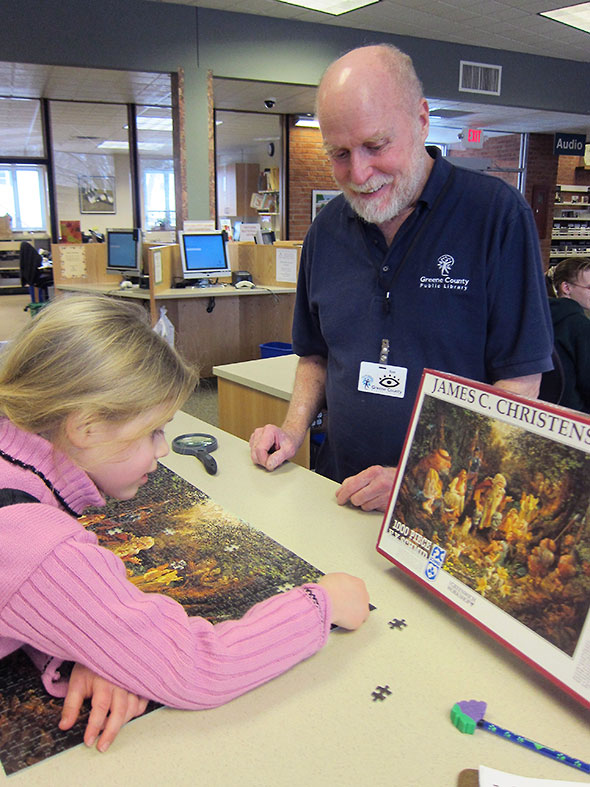 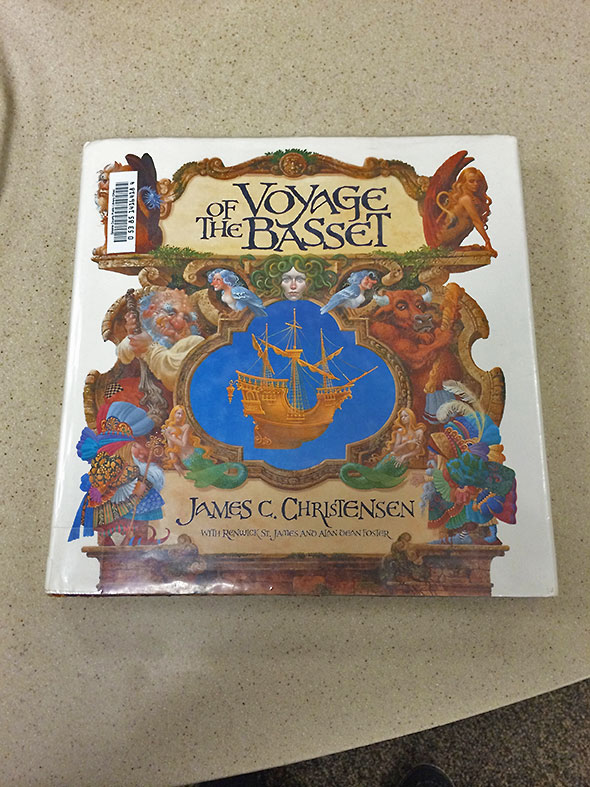 As days turned to weeks, I wondered if we would be allowed to finish the puzzle especially as progress though the wooded sections proved slow and difficult. My strategy altered again. Instead of matching patterns or shapes, I examined the quality of the print. In this way, I could separate out pieces belonging to the crisp canopy of leaves from the gloaming root-bound forest floor. Finally, enough pieces took their place that the way became easy again, and I began to wonder if I would be at the library when the puzzle was completed. 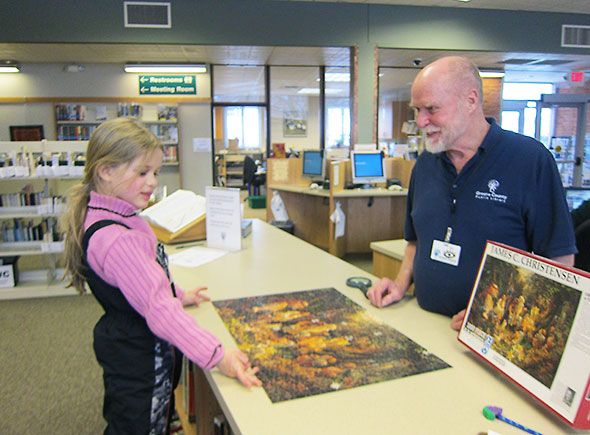 The snow day on Wednesday gave me the break needed for a final push. Dressed in thick boots and snow pants, my daughter joined me at the reference shelves where we found thirty-so wooded space to cover. The librarians echoed our excitement…”This is it! Today, today!” My daughter led the way positioning the remaining pieces, leaning close over the puzzle, and enjoying the textured run over the puzzle’s surface as much as its playful colors. After she corrected a piece I mislaid, I gave her full and final reign. She popped the final four pieces in under the appreciative eye of the library staff.

I, for one, greatly appreciate the resilience of the staff and its many visitors in this endeavor. The story began Once Upon a Time and, though it often turned unexpectedly dark and went on terribly long, I’m glad I was there to catch every intricate turn.