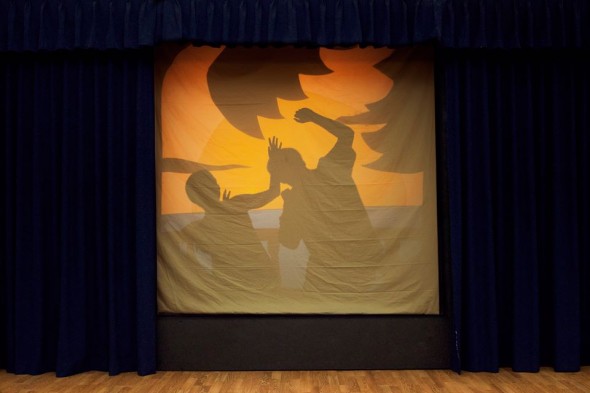 YSKP’s GODZILLA! wraps up this weekend

YS Kids Playhouse’s latest production, “GODZILLA!,” will hold its final round of performances this weekend at the Glen Helen Building on Friday, Feb. 14 at 7 p.m. and Saturday, Feb. 15 at 7 and 10 p.m.

The musical comedy, written by villager Corrie Van Ausdal with Philip and Gordon Reynolds, features a quick-change cast of five in an array of multiple roles: Sumayah Chappelle, Duard Headley, Jeremiah Scott, Bear Wright and Blaze Wright all take the stage. The play utilizes projected shadow scenery as well as a milieu of sound effects to move the cast (and the “500 foot fire-breathing lizard”) from a passenger ship to the Japanese coast to the White House to our own back yard. An exceedingly singable original ballad by Blaze Wright connects the series of comic vignettes in a fast and fun performance that features plentiful laughs, a new mystery “celebrity” guest each night and even a little Whitney Houston.

Take a listen and a peek at GODZILLA! with the slide show below, and be sure to arrive early at this weekend’s performances to get a good seat. For more information on the show, visit the play’s Facebook page.