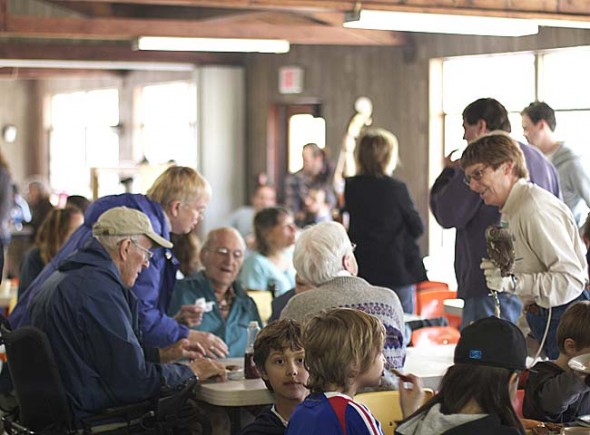 The Glen Helen Annual Pancake Breakfast is back for its 37th inauguration. The event, last held here in 2011, takes place on Saturday, March 8, 10 a.m.–1 p.m. at the Outdoor Education Center. Participants are encouraged to park in the Corry Street lot and join one of the naturalist-led hikes to the OEC starting at Trailside Museum at 9:30 and 10:30 a.m., and coming back at 11 a.m. and 12:30 p.m. (Submitted photo by Brooke Bryan)

Who can resist the thought of eating a pile of fluffy golden pancakes seated next to friends and neighbors as the spring sun streams through the window at our homey Outdoor Education Center? That time-honored event has been nothing but a thought for the past two years, as the Glen reorganized its calendar and its staff and volunteer duties. But such a convivial time, it turns out, would not be contained to a thought, and so this year the beloved Glen Helen Pancake Breakfast returns to welcome the carb and cardinal lovers back to support the preserve.

“We heard from a lot of people who told us quite passionately, ‘You may think of this as a fundraiser, but to us it’s a community gathering we love doing,’” Glen Helen Ecology Institute Director Nick Boutis said this week. “It’s nice to be able to honor that when we can.”

The 37th Annual Glen Helen Pancake Breakfast ushers in an almost entirely new group of volunteers, led by Glen Helen Association Secretary Kevin Lydy, who agreed to lead the new charge. Lydy joined the GHA board two and a half years ago and felt a duty to answer the frequent demands to bring back the pancakes, not so much a fundraiser as a “friend-raiser.”

“Many have expressed sadness, disapproval and even anger that this time-honored Yellow Springs tradition (“institution” even) was absent from the long list of community events that the village of Yellow Springs looks forward to,” he wrote in an email last week. So he feels happy to be able to say, “The Glen is bringing the Pancake Breakfast back! It’s back!”

This year’s breakfast will be held on Saturday, March 8, from 10 a.m. to 1 p.m. The breakfast costs $10 per person and will feature pancakes and sausage, as well as the option of gluten-free pancakes and sugar-free syrup (while supplies last). The food is donated from local establishments including Emporium Wines and Underdog Cafe, Young’s Jersey Dairy, Tom’s Market and Flying Mouse Farms. Live music will be playing at the OEC, while the Glen’s naturalists will lead outdoor nature programs for children that feature snakes, turtles and birds from the Raptor Center. An Ecocamp registration table will also be set up for campers who want an assured spot in one of the Glen’s summer camps. The Glen will raffle off a week-long camp to a single camper at the breakfast as well.

New this year, between the hours of 9:30 a.m. and 12:30 p.m., naturalists will be leading 30-minute hikes between Trailside Museum and the OEC to take hungry breakfast seekers to and from the event. Glen staff encourages participants to park at the Corry Street lot and walk in, saving parking at the OEC for the less mobile.

The Glen reigned in its fundraisers and activities two years ago in order to reduce the burden on its staff and focus on the events that generated the most significant results for the preserve in terms of such markers as revenue or land and facilities management. The Glen’s longtime Nature Arts and Crafts show was also eliminated at what was otherwise a busy time for Glen staff. But the pancake breakfast, though not a huge fundraiser, drew a huge local crowd and had become too precious to give up, according to Glen Project Manager Tina Spencer.

“I believe Nick’s desire was to showcase the resurgence of the breakfast as a passion project — one held up by community members, like Kevin, that have missed the event and wanted to be a part of its return,” Spencer wrote in an email last week. “It’s our hope that the community will not only take part in the breakfast by attending with their friends and families, but also develop a desire to be a part of this event in the future.”

Volunteers for the breakfast are still needed in the kitchen, on the serving line and in various other roles. Anyone interested in contributing can contact either Kevin Lydy at kevin.lydy@wright.edu or Tina Spencer at tspencer@glenhelen.org.