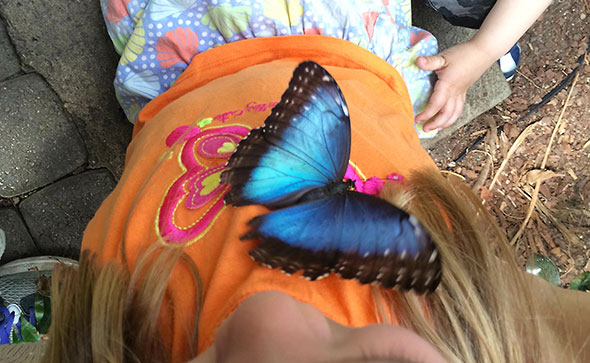 This past Monday my daughter’s first grade class took an ambitious trip to the Franklin Park Conservatory. They came to see the beautiful gardens of the park—both inside the conservatory and about the grounds—and to check out the conservatory’s Garden Campus, four acres of hands-on instruction in gardening and edible landscaping. 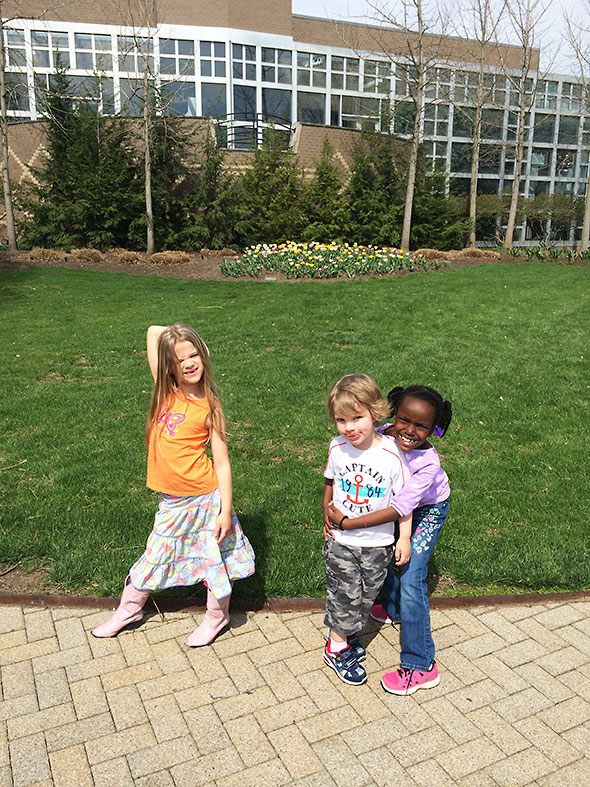 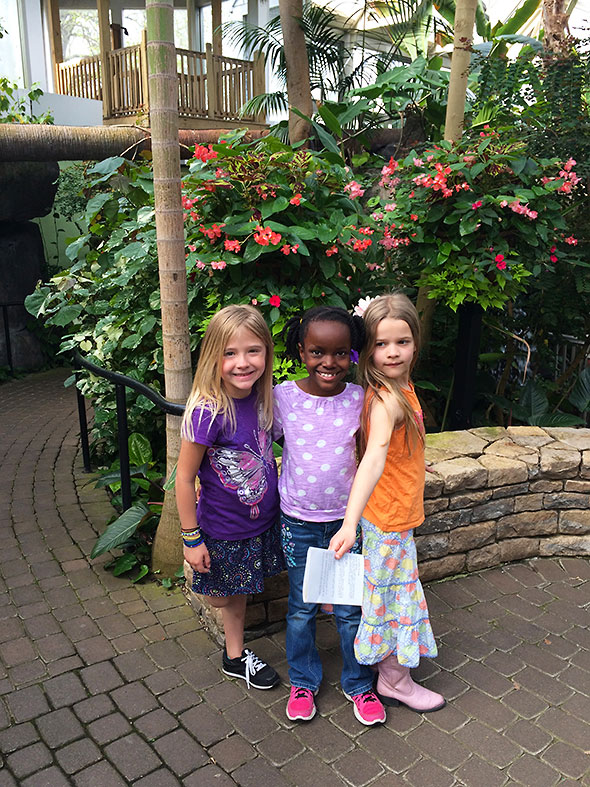 At first, we broke into groups of four and five and, as I tucked away my crew’s jackets into my backpack, I pointed the children to the gift shop while they waited. They happily took my direction and giggled excitedly over the plants in the the shop’s greenhouse. 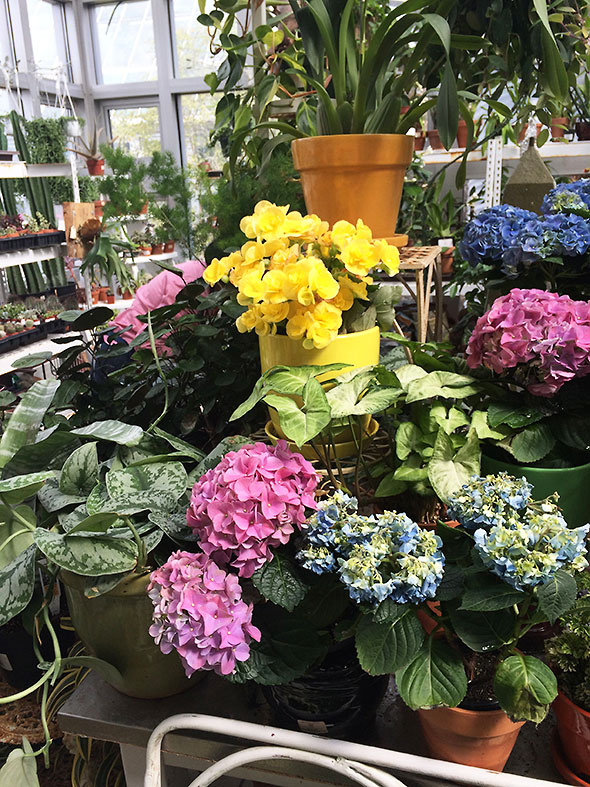 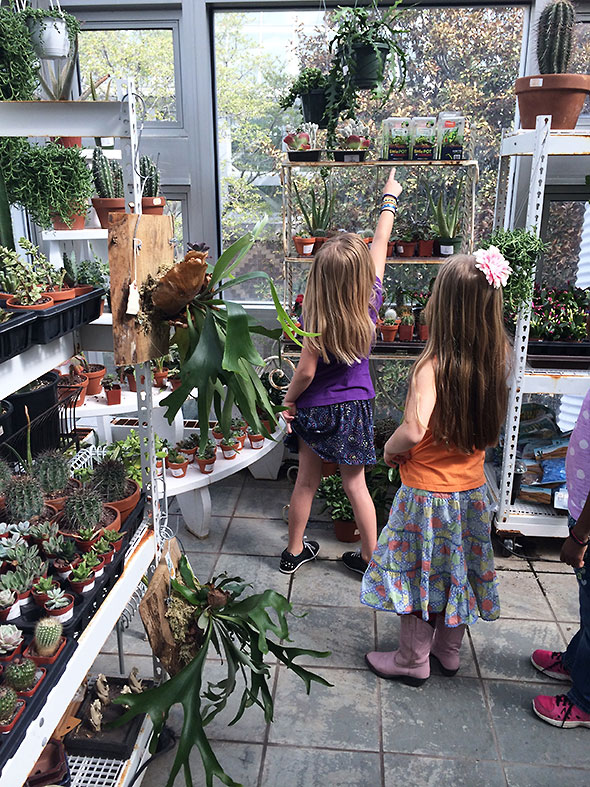 The shop was bursting with color in particular with hydrangea that had been dressed in bright yellow, hot pinks and purples. We also found a huge cache of cacti, some with needles as long as a porcupine’s quills. We laughed over this little shop of horrors—complete with venus fly trap—in the back of what was otherwise a candy shop of spring blossoms. We took turns picking favorites among the plants and garden ornaments. When something particular took their fancy, the children would turn to me and say, “Take a picture! Take a picture!” 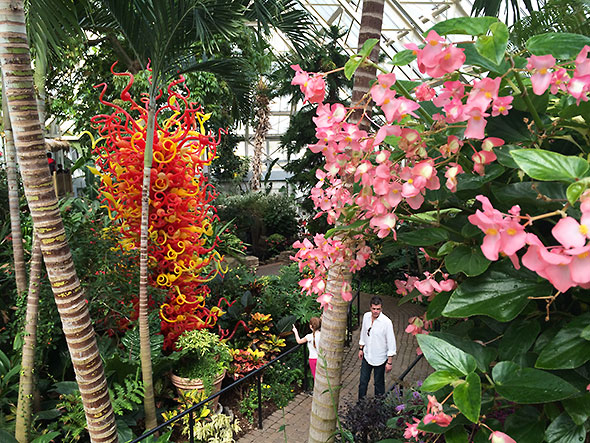 Next to the gift shop is the entrance to the Pacific Island Water Garden—a tropical two-story garden featuring waterfalls, a koi-filled pond, and towering glass sculptures by Dale Chihuly. Every spring, when the tropical flowers are in bloom, the garden is transformed by butterflies. I was surprised to learn about the butterfly garden, but my daughter was clearly in the know. She had dressed for a hot Florida day in a long swinging cotton skirt and a sleeveless shirt with a bright orange and green butterfly on the front. She had even picked out a large silk flower to wear in her hair. After entering into the water garden, I soon learned that the flower was intended as a place for the butterflies to fly to and alight. The girls took turn holding it above their heads. The butterflies, however, preferred buzzing by our heads. As we walked along the brick paths of the garden, the winged creatures zoomed past—grazing our cheeks repeatingly—their fluttering attention drawing out squeals of delight from the children. 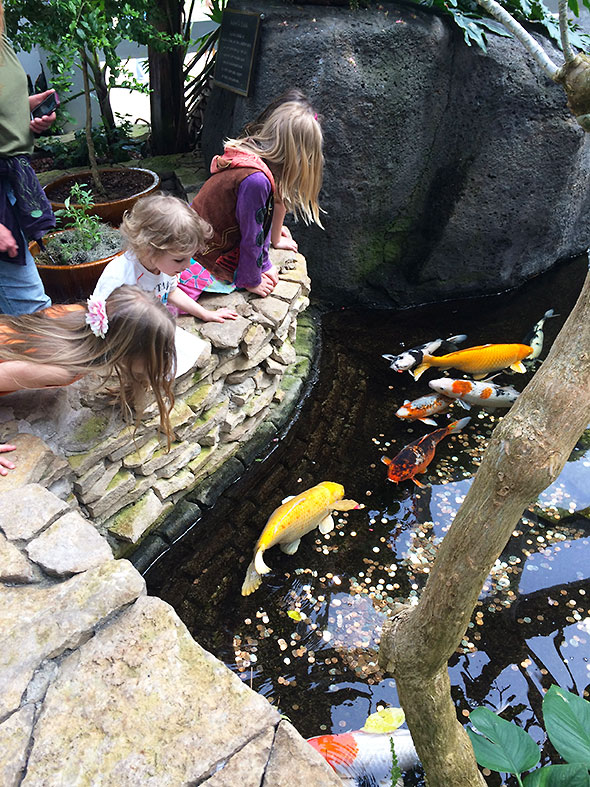 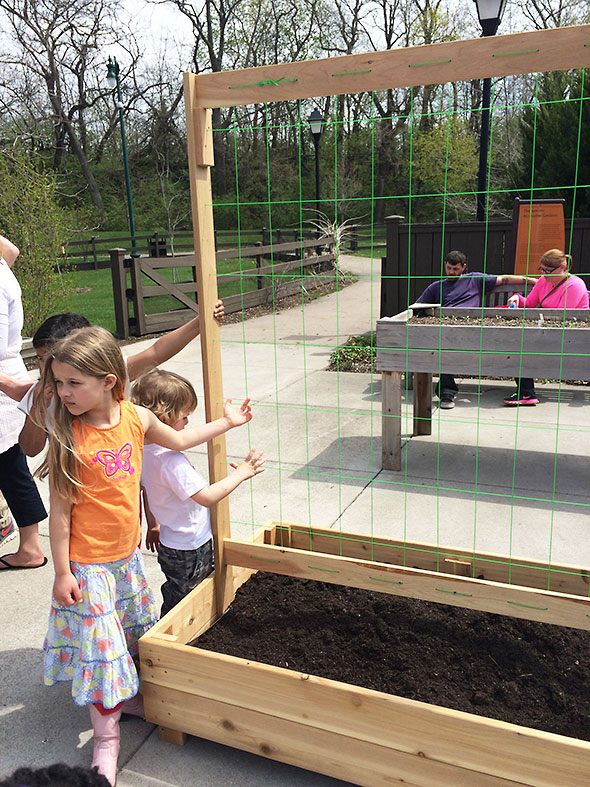 We played among them until lunchtime. The late morning was sunny and clear, so I grabbed a couple of picnic blankets from my car, and we nested on the lawn to eat in between the conservatory and the playground. The playground was much too tempting and almost won us away from the class’s after-lunch activities at the Garden Campus. However, the day was turning hot and, after an hour-long picnic in full sun, we took a trip to a nearby water fountain and I steered us back to the first grade class winding its way through a maze of edible gardens. Tucked away from view behind a greenhouse and other support buildings, the Garden Campus is a world of wonders. We started from the ground—producing rich nutrient soil from compost—and moved up to selecting a site appropriate for our seeds and finally to planting. The children got hands-on experience as we progressed through the garden’s maze: turning compost in large bins shaped as globes and barrels, sowing lettuce in raised beds. The partitions that formed the maze were edible gardens themselves: vertically stretched lattices in between the usual horizontal ground planes of the garden beds. As we passed each living wall, we plucked the strings of their lattices, some that already carried grapevines or supported the well-tended and strictly-trained branches of matching fruit trees, others that would soon host pea bushes. 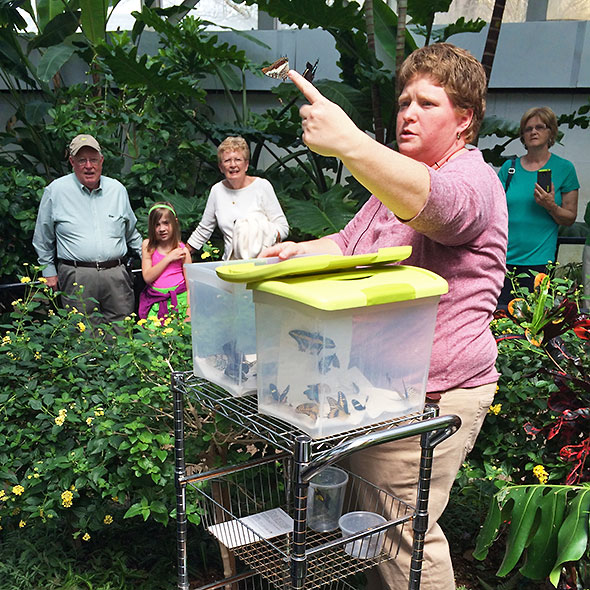 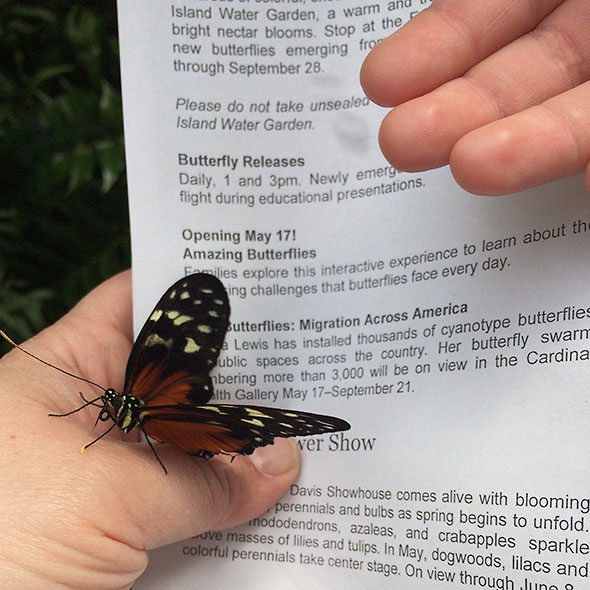 My son was quite keen to return to the butterfly garden so when the buses arrived to take the children back to Yellow Springs, I signed out my daughter from the field trip and we went straight back to the butterflies. My boy’s instincts proved spot on as we reached the garden gates at the very moment that a conservatory ranger arrived carrying two plastic tubs filled with about 100 newly hatched butterflies. We followed her as if she were the pied piper into the garden’s heart. From a station nestled between the two cascading waterfalls, she put on a microphone and welcomed the gathered crowd to the first of two butterfly releases scheduled that afternoon. 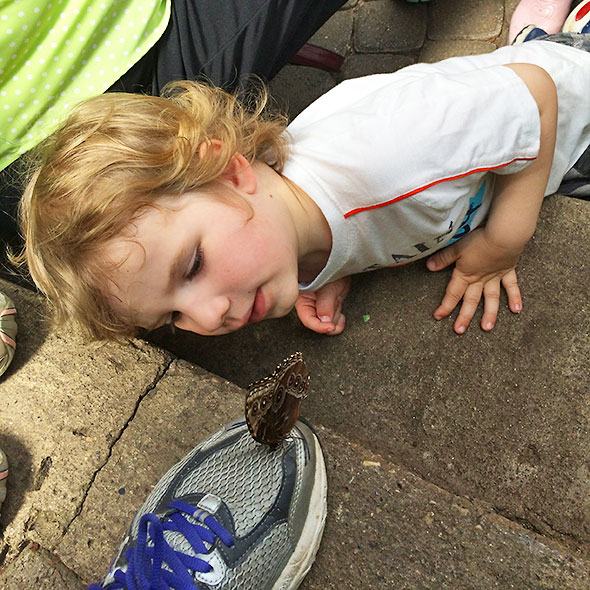 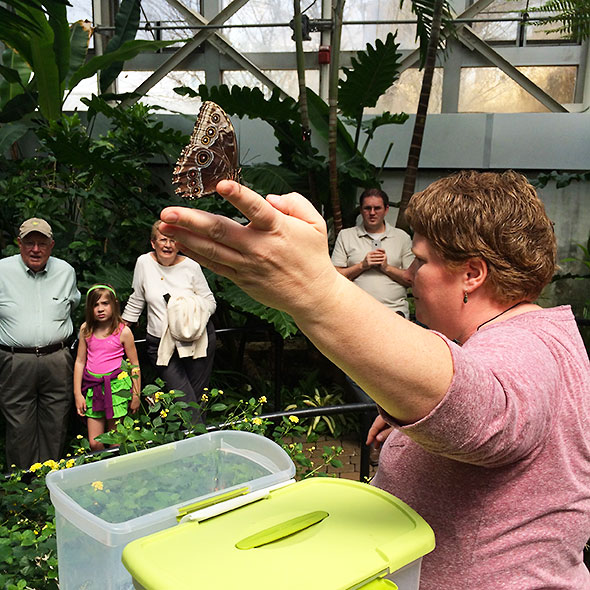 She won the children’s rapt attention. Though she promised no great flourish as she opened the first of the tubs, about twenty butterflies immediately took wing. Then she began to pull more butterflies—one by one—out from the bottom of the tub telling us their species name, their life span, and quizzing us on their distinctive markings. She coached us through a discussion on the differences between moths and butterflies asking us to note how butterflies keep their wings closed when they rest while moths keep their wings open. After a bit of prompting, I offered that a moth’s antennas looked like a feather while the butterflies alighting before me had long straw-like antennas. 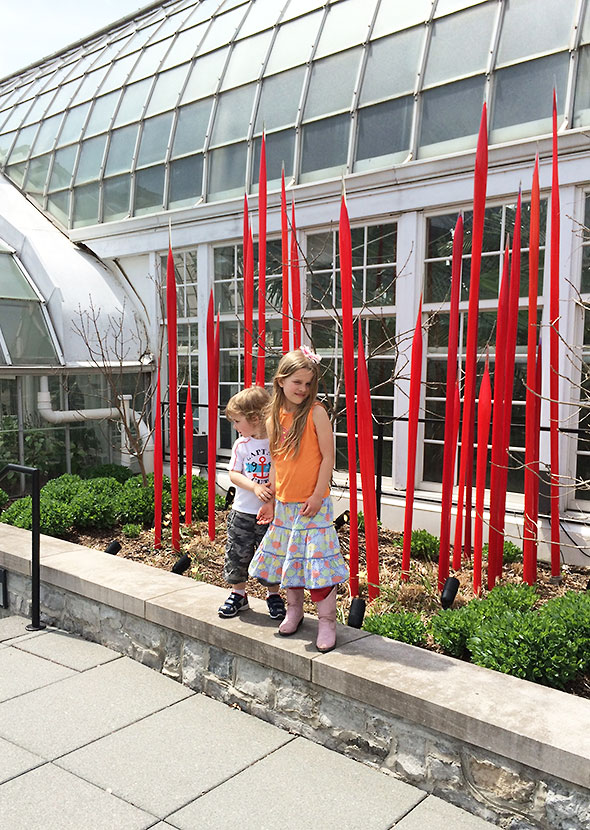 We were throughly enjoying this exercise when the ranger pulled out the largest butterfly we had seen yet. This show-stealer, she said, was a Blue Morphe named after the intense blue on the top side of its wings. This intense blue which is hidden whenever the butterfly is resting contrasts strikingly with the intricate brown and tan pattern on the underside of the butterfly’s wing. Brown pattern may be less intense in color but is still breath taking. The eye-dotted pattern makes the butterfly look bigger than it is—less flat—and serves to startle its viewer. The Blue Morphe did just that as it hoped off its ranger’s finger and onto my shoe where it remained to my son’s great delight for several minutes. The scene stealer then alighted on my daughter right on the butterfly of her shirt. By the time we recovered from our opened-mouth astonishment, we realized that we hadn’t heard a word the ranger said for a good ten minutes. When the butterfly found another family to grace, we broke from garden’s spell (and intense heat) and headed to the outside gardens lingering here and there until we made our way back to the playground.

We could have stayed all day discovering new nooks and corners in the arresting collection of plants and art at the park. My daughter however sensed that we were quite close to another favorite destination—Columbus’s science museum was a mere mile away—and she convinced me that we should take advantage. 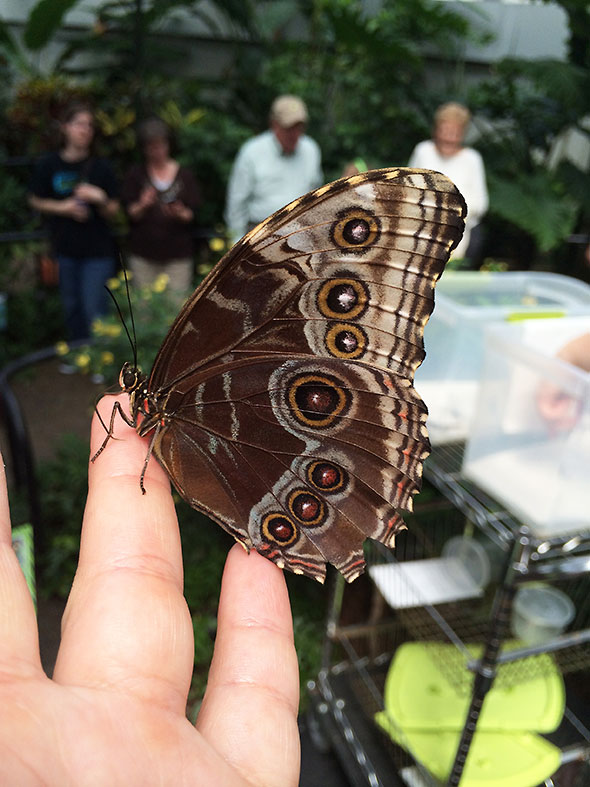 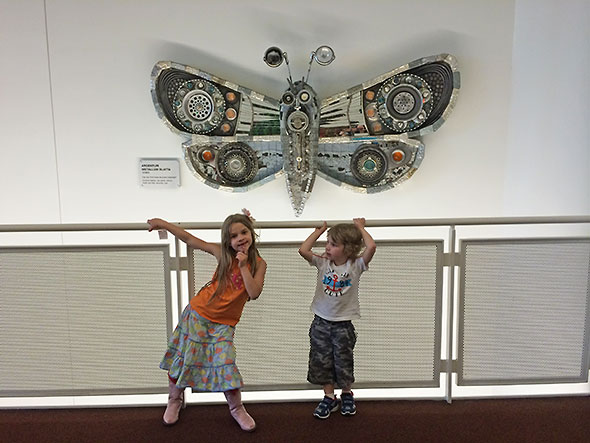 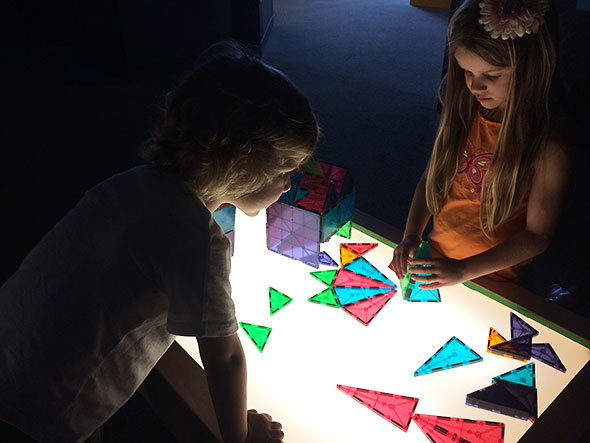 Soon, we were in the cooler confines of the science museum but not all that far away from where we had started. Playing with light, color, and pattern, we three leaned forward to get a true feel for the magnetic mysteries of nature.