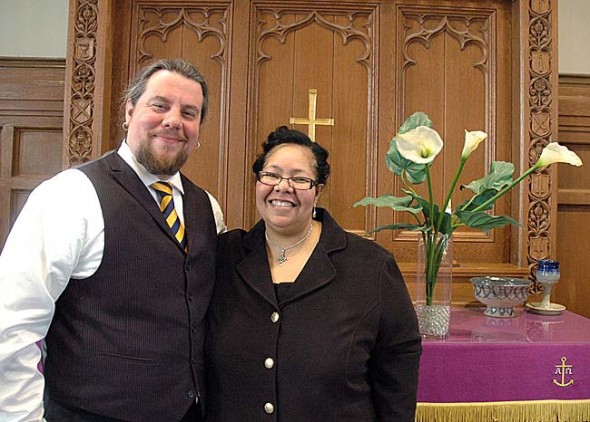 Celebrating the joining of their churches in worship during the upcoming Holy Week is the Reverend Aaron Maurice Saari of the First Presbyterian Church of Yellow Springs and the Reverend Sherri Blackwell of the Yellow Springs United Methodist Church. Joint activities, which are open to the public, are a “Jesus Christ Superstar” sing-a-long on Palm Sunday, a ritual Agape meal on Maundy Thursday and a candlelight service on Good Friday. (Photo by Megan Bachman)

Only in Yellow Springs will this year’s Holy Week observance include a sing-along to “Jesus Christ Superstar.”

The Palm Sunday screening of the 1971 rock opera is one of several events scheduled in an infrequent collaboration between local Methodists and Presbyterians. Others are a joint ritual meal on Maundy Thursday and a mystical candlelight service on Good Friday. All events are open to the public.

The two local Protestant denominations are coming together to worship during what is the most somber, and joyous, time of the Christian calendar, its pastors said this week.

“This time is so significant in our religious tradition, and for two communities to come together provides for spiritual connection and a more meaningful experience,” said the Reverend Aaron Maurice Saari, pastor of the First Presbyterian Church of Yellow Springs. Saari said it’s especially important to celebrate together since attendance can be low while emotions run high during Holy Week, which commemorates Jesus’ crucifixion and resurrection.

The Reverend Sherri Blackwell, of the Yellow Springs United Methodist Church, also has high hopes for the budding collaboration.

“God is multiplied when communities of faith come together,” she said. “And I hope this can continue beyond us — it’s about our congregations.”

The pastors said that they and their congregations have a lot in common, and in a time of declining church membership nationwide, they hope to worship together more often. The pastors will preach from each other’s pulpits during Holy Week in a show of hospitality, they added.

The two reformed Protestant churches have vastly different organizational structures (the Methodists are more top down, the Presbyterians more bottom up) as well as histories (the Methodists were founded in 18th century England, the Presbyterians, in 16th century Scotland). But they have much more in common, the pastors said, especially in a community where many don’t identify as Christian.

Besides their faith, both churches are committed to community service and host many community groups and events in their buildings, the pastors said. Located one block away from one another, the Presbyterian and Methodist churches are two of the oldest congregations in Yellow Springs, dating back to the 1850s and 1830s, respectively. Both pride themselves on being welcoming to anyone who wants to worship and keeping an open communion table, the pastors said.

As for pastors Saari and Blackwell, both grew up in Yellow Springs and graduated from United Theological Seminary in Dayton, and both want to “contribute to the community and not in the way of proselytizing,” Saari said.

“We both care about people — all people,” Blackwell said of herself and Rev. Saari. “I don’t know that all Christian pastors have the same ecumenical stance. To me, no matter what you believe, if you are genuine to that belief, that commands respect.”

The partnership begins on Sunday, April 13, with a “Jesus Christ Superstar” sing-along at 2 p.m. at the United Methodist Church, 202 S. Winter St., following both congregations’ own Palm Sunday worship services. Dancing and loud singing are encouraged, kids are welcome and joy is expected, according to a flyer about the event, which is open to the community. Saari said he’s a big fan of the Andrew Lloyd Webber musical, and not only does he own every recording, he has a tattoo of the two angels from the album cover on his left arm. Blackwell looks forward to a joyous kick-off to a “somber time,” she said.

“Let’s save that [somberness] for Thursday, Friday and Saturday,” Blackwell said. “What we’re doing on Palm Sunday is supposed to be fun and quirky. This is not a cantata.”

On Thursday, April 17, the congregations will gather at the United Methodist Church for an Agape, or love meal, starting at 6:30 p.m. and featuring foods typical of the first century Middle East such as homemade bread, olives, nuts and soup. After a feast similar to what Jesus ate with his disciples the night before his crucifixion, a candlelit Tenebrae service at 7:15 p.m. will assist worshippers in “a mystical entry into the story of Jesus’ final evening on Earth,” according to a flyer. A menorah and dipped paraffin candles made on a Kibbutz were ordered from Israel for the occasion, which Saari emphasized is to “embrace the Jewishness of Jesus respectfully.”

During Maundy Thursday, the two congregations will be encouraged to mix, while the event is open to the whole community, Saari said.

“We are trying to remember that on the night before Jesus was handed over, he gathered in meal with those he loved,” Saari said. “He brought people together, made them feel validated. Our doors are open to anyone in the community who wants to come. There will be a place set, so come and worship with us, meditate, contemplate, whatever it is you do.”

The two pastors are planning a summer vacation Bible camp and collaborations with other local churches, especially since the Yellow Springs Christian Association was disbanded in the fall, they said. And they look forward to meeting among themselves, since sometimes “a pastor needs a pastor.” Above all, the pastors want to best serve their congregations and the community, and even wouldn’t mind if their members decided to switch churches, they said.

“It’s not a competition to see how many people you can get sitting in the pew each Sunday,” Saari said. “It’s creating an atmosphere that the spirit of God can move through the people in a way that is significant, and if I can’t be a steward of that for you, let me tell you about my sister Sherri and you can go over there.”