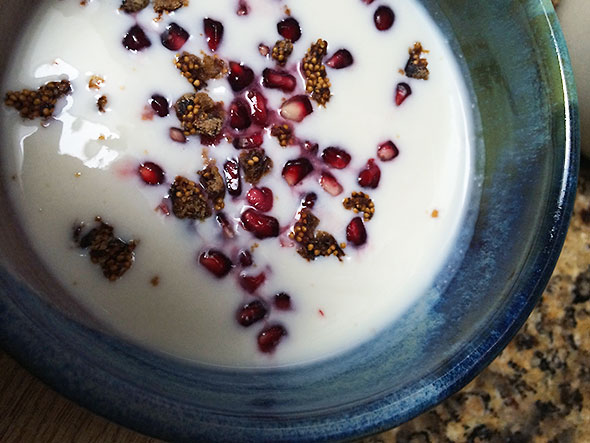 For three years, I en massed the necessary items to make yogurt: candy thermometer, fermenting system, fresh milk, and starter. Just this month, I achieved critical mass. This logistical bid germinated back in 2011 when I found a Korean-made fermenter at the Pleasing Market in Fairborn. I had gone to look at the rice cookers that market-owner Ashley sells, but my attention was drawn away by the pop-art packaging of the fermenter. Ashley was excited about the product too and explained to me its many uses: sprouting vegetable seeds, germinating brown rice, fermenting soybeans and rice, and making yogurt. Persuaded and a bit dazzled, I picked out a bright yellow machine and brought it home. 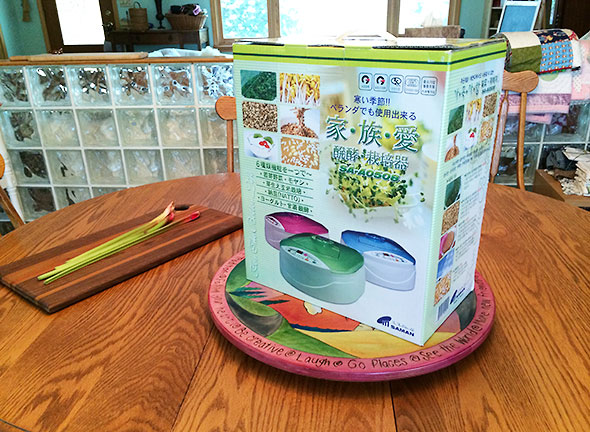 I opened the packaging and found a multi-page instruction manual with well-drawn illustrations but text written entirely in Korean characters. I do not know this language and smirked at my predicament. The manual offered hope on the back cover:

It is possible that Korea / English / Japanese
instruction manual can be confirmed.
going to http://www.seyong.co.kr

Hope it offered but not actual deliverance. When I loaded the Korean web address into my browser, the link was dead. Various web searches on the product number and company name failed to connect me to a manual. Still I didn’t give up and return the item. I figured I had a perfectly good instruction manual. It just needed to be translated. I knew people of Korean heritage and could ask for help. The trouble is that I felt shy about asking. I wasn’t sure which operation I would try first, and I didn’t want to overburden my friends by asking them to translate the entire pamphlet. I stored the fermenter away until I felt ready. It soon sat forgotten. 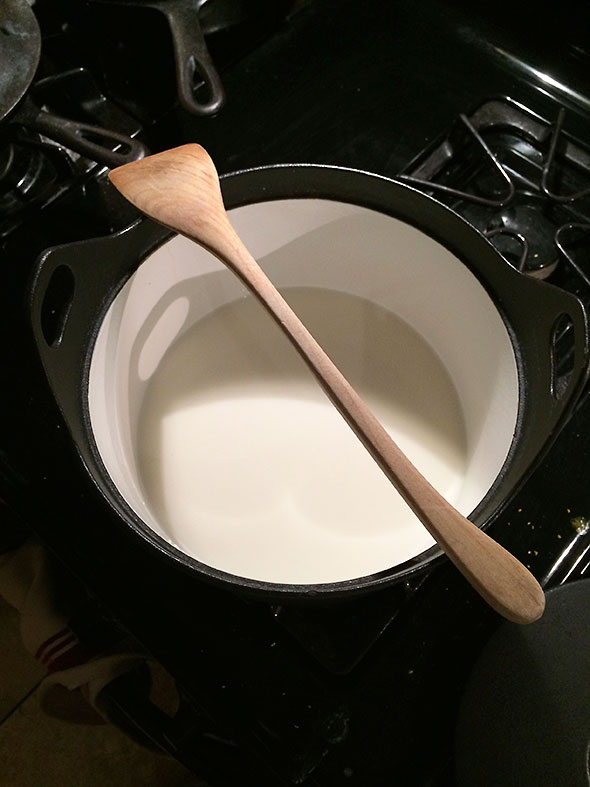 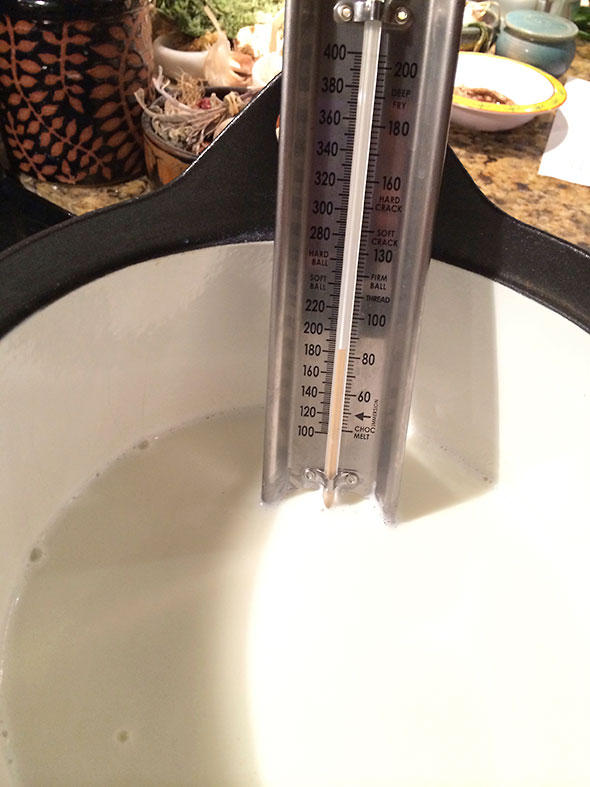 Now, in the meantime, my Aunt Teri was encouraging me to get a diary goat or to buy into a herdshare. She and my Uncle Harv have raised goats for years, and she’s often treated me to the butter and cheese that they produce from their goats’ milk. So when I was offered a spot in a goat herdshare, I jumped at it. My husband Jeremy was skeptical. “Do you really have time,” he asked, “to make cheese?” Fortunately, he likes chèvre and relented. When the milking yielded me a half gallon share, I looked at the recipe sheet that came with the bottled milk and considered its options. I wanted a firm plan before return home and pondered out loud over the choice of making either paneer or yogurt. The milker Keegan took interest in my dilemna. He had made a batch of yogurt in a Salton Yogurt Maker that he was in raptures over and pressed me to try it out. I was handed the maker in its original box circa 1970s and laughed after I peeked inside to see the model’s yellow plastic base. Noting the similarity, I admitted that I had a yogurt maker at home, but that I had yet to decipher its Korean controls and manual. We agreed that I should do a batch of yogurt in the trusty Salton and then translate the experience to my foreign appliance.

The Salton Yogurt Maker is elegant and blissfully easy to use. That evening, I unpacked the unit and followed the yogurt recipe that I picked up with milk. First, I heated a quart of milk slowly to 180 degrees Fahrenheit and then let it cool to 116 degrees. Next, I added two heaping tablespoons of a good quality starter (fermented milk or yogurt that contains live cultures); here I chose a greek yogurt that I had picked up from Tom’s Market. The Salton Yogurt Maker had five beautiful cups made of white milk glass. I filled the cups mostly full and put on their white plastic lids. I plugged in the yogurt maker and noted the time, 11pm. Eight hours later and then at two hour intervals, I checked the progress of fermentation in the cups waiting for a signicant change in the thickness of milk. 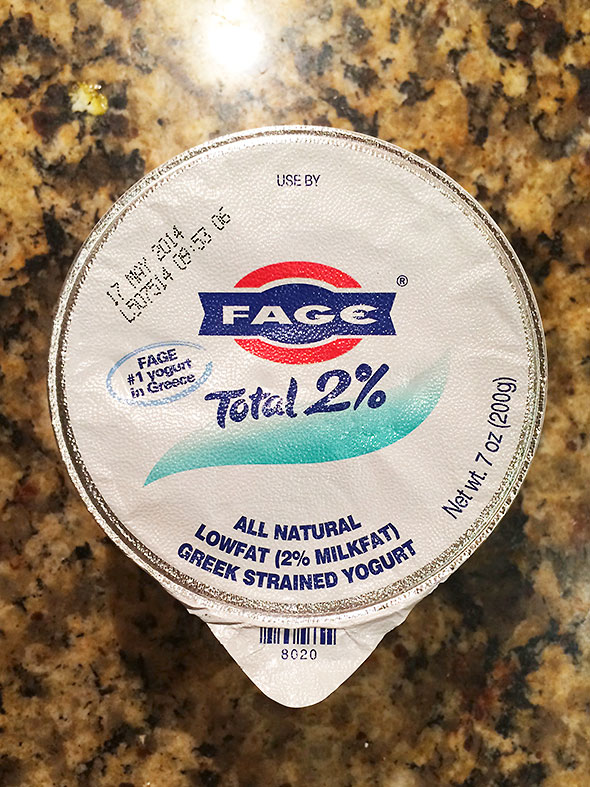 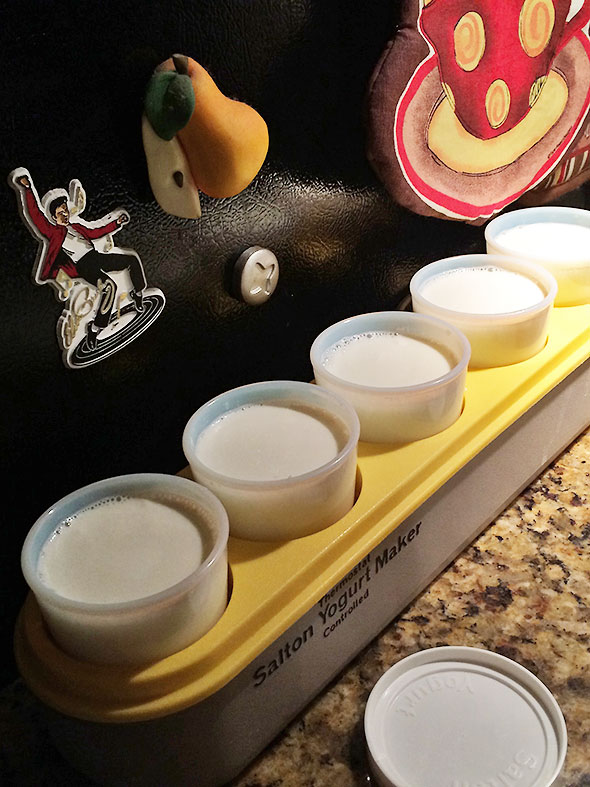 At the 14-hour point, I was pleased with the fermented milk’s consistency—creamy and clinging thickly to a spoon—and unplugged the yogurt maker. I fitted a wide-mouth funnel to a bell jar and was about to transfer the warm yogurt from cups to single container when my daughter volunteered for the task. As she filled the quart jar, she and her father began to plan their next breakfast and promised each other yogurt smoothies in eager conspiracy. 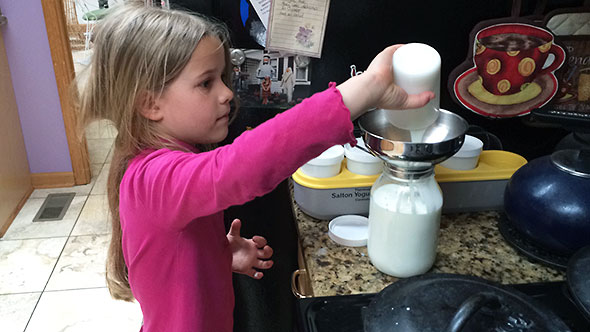 With a full jar of yogurt chilling in my refrigerator, I pulled my Korean fermenter out of storage. The box from the manufacture Saman was easy to find—still bright and cheery—perched next to a once much-loved automated breadmaker. The task of fermenting yogurt proved so simple in the Salton unit that I figured I might be able to work out the Saman appliance from its manual’s illustrations. I removed the unit from its box and took stock. The Saman is a multipurpose fermenter, so its design is more complex than the Salton. It has five color coded buttons, a timer that counts down in hours, and a single square-shaped well. In addition to the cups for yogurt fermentation, the Saman appliance comes with two trays: one for water and one for wicking. I separated the two trays and there…waiting patiently for me under the water tray…was a second pamphlet. 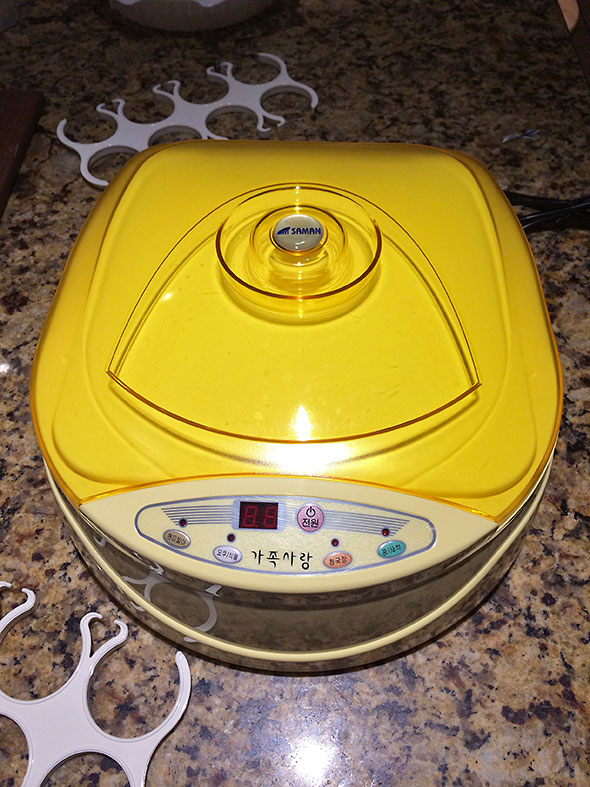 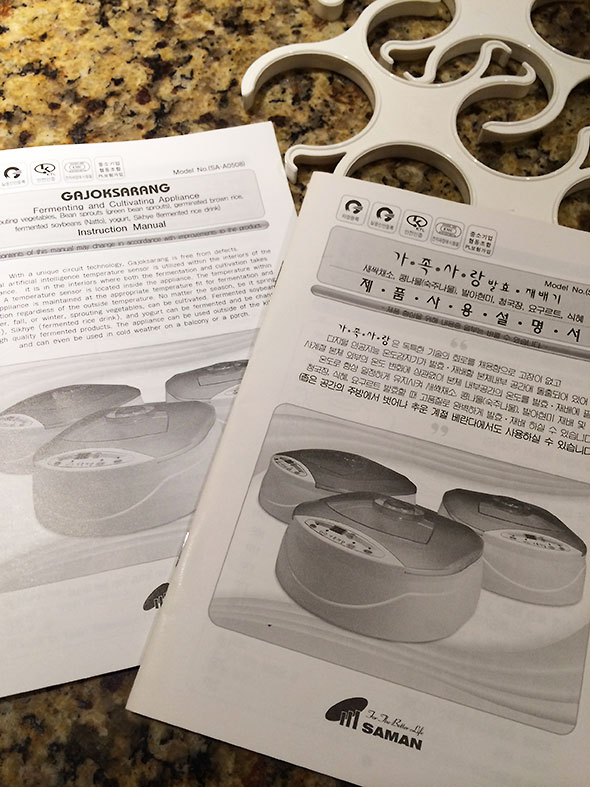 The pamphlet was identical in every way to the Korean manual but written in clear, crisp English. I flipped through the 21 pages of instructions and was extremely grateful for the informative translation even if it was charmingly imperfect. The manual’s recipes, care instructions, and precautions that observed food safety were exquisitely detailed, and I felt my earlier instincts regarding the complicated-looking Korean manual justified. 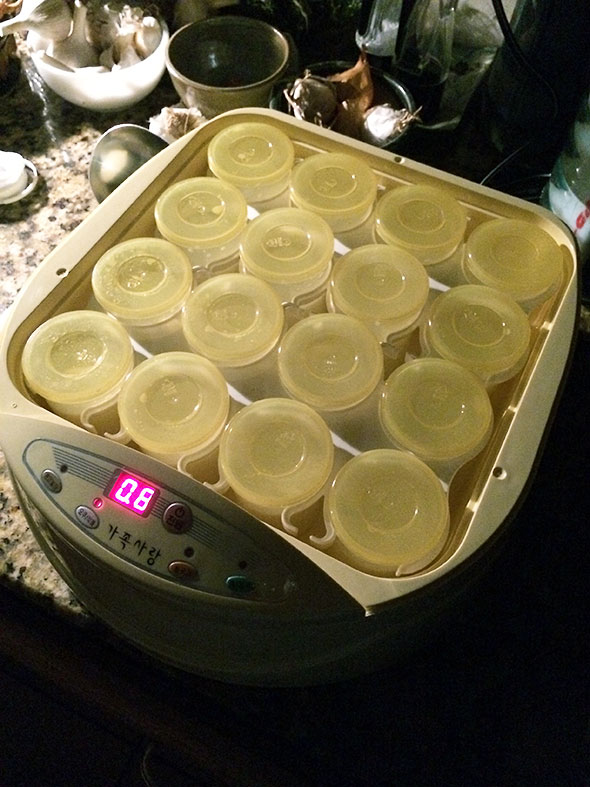 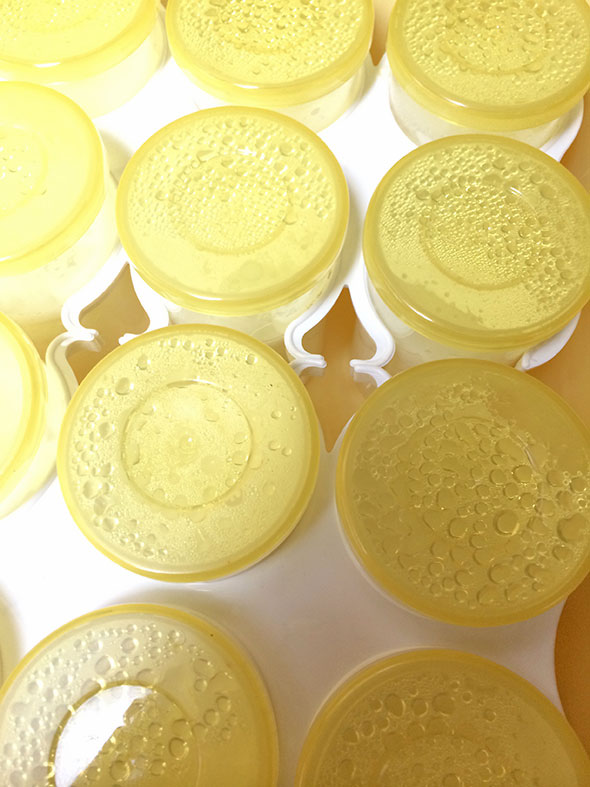 The next day, when I returned the Salton to its generous owner, I was pleased to report my find. The Saman’s manual is now safely stowed in a kichen drawer above the cabinet that stores its subject matter. I will definitely miss the beautiful milk-white glass of the Salton’s yogurt cups, but as a consolation the capacity of the Saman fermenter is twice that of the Salton’s. The four of us—Jeremy and myself, our son and daughter—gathered Thursday night to process two quarts of goat’s milk, and we awoke on Friday morning to the chirp, chirp of the Saman singing praises. We opened its dual lids and gazed down at the dewy 120-milliliter cups of yogurt—creamy and thick—freshly prepared for us. 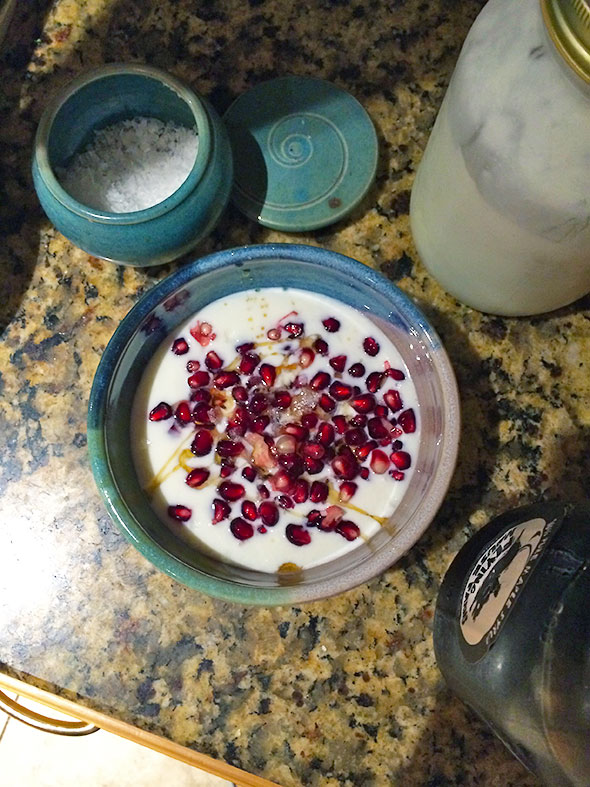 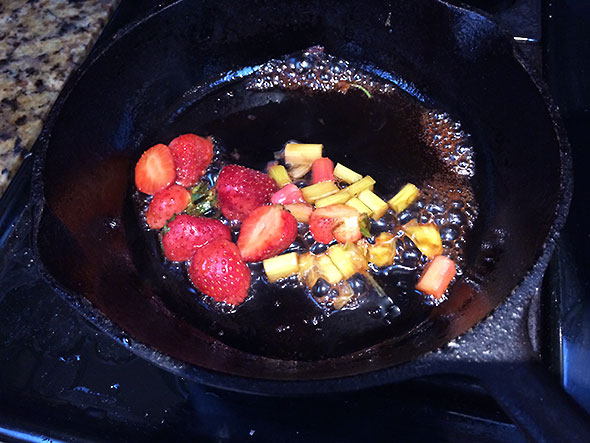 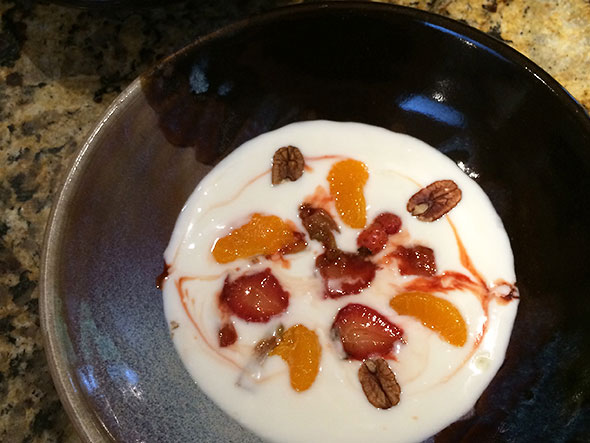 As we gear up next weekend for our cheese-making class—Aunt Teri, be excited—we are enjoying our rich store of fermented milk. We’ve been drinking sweet and salty lassi and spooning bowls of yogurt garnished with nuts, fruit, and drizzles of syrup. When I first saw the Saman box, I was drawn to its potential and strangely sure of its impact. Now the whole family is fascinated—hooked by its sunny charm—and the first of its tasty possibilities has been confirmed.