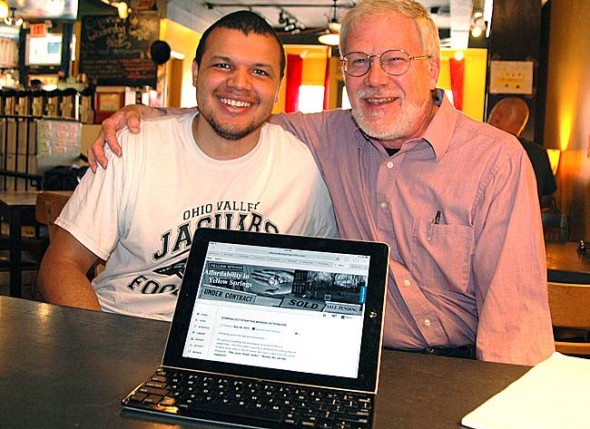 A new force for engaged democracy

Crowdsourcing has been used for everything from tracking the path of meteors to coming up with new Ben & Jerry’s ice cream flavors.

The Aretê Party, a collaboration between villagers and Antioch College students, hopes crowdsourcing can help them achieve the ideal of popular democracy here, according to party co-founder Steven Deal.

“If you have popular democracy, it changes the ground for people’s engagement,” which is now centered on November elections, Deal said. “People don’t have to bring money to the table to bring a voice.”

It works like this: The party first hosts online forums to spark dialogue on local problems. Taking ideas from the discussions, the party comes up with action plans it then seeks to implement. Eventually, forum participants will select candidates for elected office among themselves, and, if they are elected, participants will continue to feed representatives opinions and information.

According to co-founder and Antioch third-year student Guy Mathews, the party’s goal is to spark a national movement to wrestle the government back from the grip of corporations.

“We could take power back from the government because in reality, we are the government,” Mathews said. “We could have an actual democracy, not an oligarchy.”

The Aretê Party’s first trial phase has begun and an online discussion on the issue of affordability in Yellow Springs recently ended. Since the beginning of April, around 30 villagers have weighed in on the high cost of housing, prevalence of low-wage jobs, declining diversity here and other affordability-related issues. The results of the discussion are being compiled.

“We have these ‘big-canvas’ problems that we’re trying to cram into 10 minutes on the Council schedule or onto a Facebook post or an evening at the Presbyterian Church,” Deal said. “But when you’re trying to have a discussion, it has to really be organized and structured to come out with an output.”
Deal said the initial response to his online forum idea was one of skepticism along the lines of, “All we need is another place to talk about things in Yellow Springs and not come up with any answer,” he said. But by taking ideas and turning them into plans that identify resources, plus establishing timetables for individuals and groups to carry out strategies, Deal hopes conversation leads to real change. A plan to address village affordability is due out by the end of June.

And while local dialogue has often been contentious on Facebook and the 45387.org online forum, Deal hopes his model improves the tenor of the debate. The goal is “thought backed up by substance,” in Deal’s words, with facts and references used as often as opinion.

“I’ve found that if you bring facts to a discussion with a reference, the flaming stops,” Deal said. “And if it’s only opinion you can swirl around and never come up with an answer.”

Deal is an entrepreneur and systems engineer who used to own the local engineering consulting firm Deal Corp. He became interested in what the industry calls “massively-distributed online problem-solving” when the Defense Advanced Research Projects Agency (DARPA) ran a contest in 2009 to create models it could use. Deal also participated in a national online dialogue on poverty and wealth in America. Last year, Mathews, an Antioch political economy major, was visiting Deal’s home in the village when the two started talking about “how money is driving the political machine,” Deal said. They decided then and there to start a new political party. Bylaws were drawn up, and the party was officially incorporated in the State of Ohio.

But in contrast to most political parties, there are no tenets of Aretê. Instead, the party’s platform emerges from “continuous, structured dialogues,” according to a party handout. Described as a grassroots movement that is accountable to its members rather than special interests, corporations and lobbyists, Aretê hopes to make government accountable to and representative of the people once again, board members said.

“Most people don’t feel they can make a difference in the direction in which the country is moving, the decisions their leaders make,” according to an Aretê handout. “When they communicate with their elected representatives, they get party-line answers and sound bites that don’t address their needs.”

At the same time, participating in online dialogues will encourage citizens to become more educated on community issues and strive for “individual excellence, Aretê members said. Hence the name “Aretê,” which is Greek for excellence, a concept Deal borrowed from a passage in “The Art of Motorcycle Maintenance.” The party’s motto, Hoc melius pro omnibus, translates as “All for the best of all.”

Other board members of Aretê are Antioch students Brendon Deal, (Steve Deal’s son), and Alex Malangoni.

So far participation on the forums has been slow with many more people reading than posting, according to Deal. But the forum has generated many interesting ideas, and the group is now in the process of identifying seven to eight issues that get to the core of the affordability problem from an initial list of 45 that participants generated.

According to a post from Deal on the site, one key idea that has emerged from the debate is that “the paradox of wanting a growth-constrained, small town and wanting an affordable town with a demand for housing and services seems to be a core tradeoff that the Village hasn’t yet got its arms around.”

Mathews additionally hopes that Aretê will help Antioch students be more engaged in village politics. Because students are so busy between classes, co-ops, work-study and participating in Antioch’s governance, Aretê could be a way they could stay abreast of local issues and get involved. According to Mathews, students are most interested in environmental and economic issues, especially around the planned opening of a new hotel in town, and the availability of off-campus student housing, since upperclassman are now allowed to live off campus and students are beginning to rent units around the village.
“Community involvement needs to be worked in as a priority,” Mathews said of Antioch.

Deal said the initial affordability discussion is a three-month test of the model, after which it will be honed. The board is also looking for more members. Since members don’t currently have political ambitions for elected office themselves, they hope the party will sustain itself through its members. And if all goes well, it may be a model that Democrats and Republicans may look to, Deal said.

“Starting our own party gives us the freedom to be disruptive,” he said. “And I think we’ll know we’re successful if the Democrats adopt what we’re doing.”
Visit http://Aretêparty.net for more information on Aretê and http://affordyellowsprings.zilino.com to join the forum.